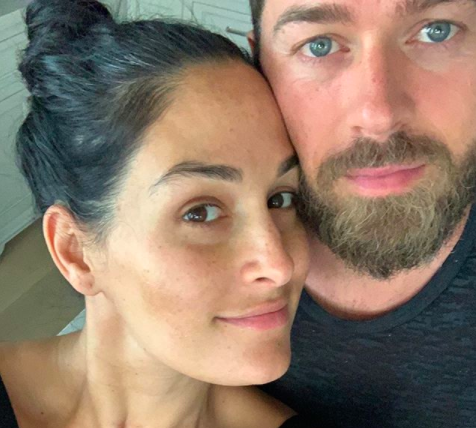 Nikki Bella announced her engagement with Artem Chigvintsev in January. And now she is sharing with fans the moment she knew he was the one.

How Nikki knew the Artem was the one

The retired WWE star spoke exclusively to the Daily Mail Australia about the exact moment she knew her fiancé was the one.

Nikki revealed that she knew very early on in their relationship that Artem was it for her.

She said, “Artem and I, when we started dating around Christmas time [in 2018], he was still on tour for Dancing with the Stars. It was really incredible and passionate. We would hang out every day, going on hikes, going to bars and having wine, and walking the streets [of Los Angeles].”

Nikki then shared the specific dance move that Artem performed on one of their many dates. She will never forget that romantic intimidate moment.

She went on to say, “I remember one time, he turned me and dipped me, and it was just… I remember in that moment I just thought, I feel like this is the rest of my life. She continued with thinking, “I’m either living in a movie or this is the type of feeling you’ll have when you know you’ve met The One. And I’ll never forget it.”

23 weeks today! We are definitely on cloud 9 knowing we are getting closer and closer to meeting our baby. ❤️ @theartemc

Nikki and Artem actually met on the 2017 season of Dancing with the Stars. Artem is a Russian-American professional dancer and was Nikki’s dance partner for the season.

At the time, Nikki was engaged to WWE superstar John Cena. But, after five years of dating, they called off their engagement in July 2018.

Awe, too bad! I always had a little bit of a crush on John Cena. So jealous that Nikki has dated a pro-wrestler and now is engaged to a pro-dancer. She is definitely living her best life!

In March 2019, Nikki and Artem revealed their relationship to the public. Then just shy of a year later they announced their engagement in January 2020.

Nikki and Brie: the twins who do everything together

Nikki is also currently pregnant at the same time as her twin sister, Brie.

Brie and her husband, WWE wrestler Daniel Bryan, are expecting their second child. Not only are the twins both pregnant, but it looks like they will be welcoming their new babies at around the same time.

Nikki told the Daily Mail Australia, “I feel so lucky because I literally go to Brie so many times a day and say, Hey, I’m feeling this. Is this normal? What should I be doing?”

Nikki loves her niece and Brie’s first child Birdie, so she definitely trusts her parenting advice.

She said, “I love everything about [Birdie]. So I’m like, You did something right. So I’m going to follow you!”

The Bella Twins must be so excited to be sisters and pregnant together. What a great time in their lives for them to share!

Be sure to check back in with TV Shows Ace to keep up with the Bella Twins and their soon to be babies!