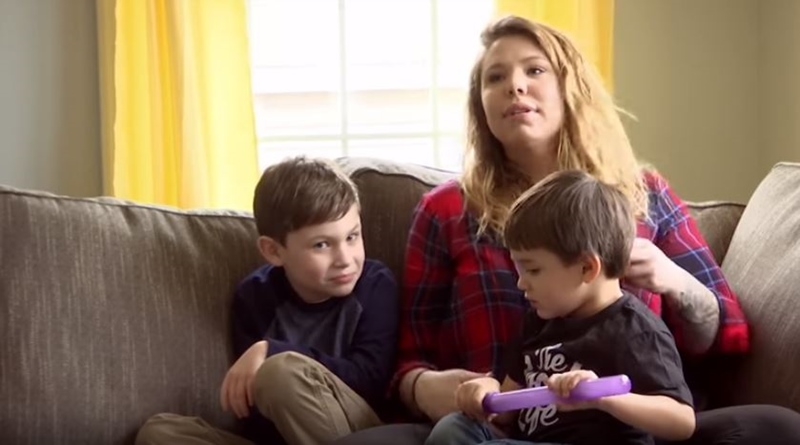 Teen Mom 2 Season 9, Episode 1 aired January 14 on MTV and Kailyn Lowry’s awkward moments with Javi’s girlfriend Lauren Comeau made for uncomfortable viewing. Seeing Javi and Kailyn need to co-parent Lincoln, that hints at an icy future. Nobody’s saying that Kailyn and Lauren need to hold hands and become best friends, but Lauren’s a part of Kail’s life now, whether she likes it or not.

In the Teen Mom 2 premiere, Kailyn explained to her producer Chris her feelings about Javi and Lauren. Actually, that was back when Javi was juggling Lauren, Kail, and Briana’s attention. Kail says she went through Javi’s texts and found a “paragraph from her” calling Kailyn a “tw*t” multiple times. Ouch! That’s gotta hurt. A hurt Kail fails to forgive easily, as Jenelle Evans can confirm.

Talking about Javi’s new baby that’s on the way, Kailyn said she just doesn’t care. Nothing to feel there at all. In fact, she pointed out that all she really feels is “good luck,” and really she can’t be bothered engaging. Kailyn says she doesn’t “want to be involved with her, good terms, bad terms,” or any other terms. In fact, for Teen Mom 2 fans, it looks like Lauren just doesn’t inhabit the same planet as Kail.

Javi speaks to Lauren about Kailyn

Meanwhile, Javi and Lauren talked about Kailyn. From Lauren, you would never think she ever said anything nasty about Kailyn, and in front of the cameras, she seems all sweetness and light. In fact, she seems to project a larger than life moral stance over dealing with Kail. With 97 days to go before she gives birth, Javi and Lauren started chatting. It centered around Lincoln and how the baby means being a big brother. Lincoln’s a”smart kid,” says Javi. Actually, he is, and he’s certain to notice any ice between Lauren and his mom Kail.

Talking about the situation with Kail, Lauren said she hasn’t met her yet because Kailyn stays away from her. “I just want her to feel comfortable,” she added. Then she admitted to feeling a bit nervous as “it’s been so long,” it “makes her wonder why.” Well, now after the first episode, of Teen Mom 2, no doubt Lauren knows why. If she really did call Kailyn a “tw*t,” what else could she expect? Nevertheless, she wants Kail and Javi to have a “happy and healthy” co-parenting experience. Javi of course, just hopes everything comes right and thinks Lincoln’s soccer match will break the ice. Wrong!

Awkward soccer match, not an ice-breaker

The soccer match actually hinted at a very icy future on Teen Mom 2, judging by Kailyn’s attitude. When very pregnant Lauren started kicking the ball around, the pain and hurt on Kail’s face radiated off the camera.  With a big gap between the two, both of them shouted out support and encouragement for Lincoln. Sorry, but it came over as Lauren trying too hard, like some kind of child support competition.

When Lux toddled over to Lauren and Javi, and Kail went to fetch her child, Lauren tried to be nice to her, complimenting the curly hair. Each time she tried, she got the silent treatment.  As Reddit user, @jsdietert put it, “I understand Kail being upset about Javi’s new girl, but you would think she’d try to at least be civil/less awkward. This chick just popped out your son’s half brother so you’re kinda stuck with her by proxy. I’m not saying they need to be bff’s or even friends, but just not so awkward.” That said it for a lot of Teen Mom 2 fans.

What do you think of Kailyn Lowry giving Lauren every hint of an icy future relationship on Teen Mom 2? Do you think it justified, given the way Lauren allegedly talked about her?

Come back to TV Shows Ace often for more spoilers and recaps on the new season of Teen Mom 2.