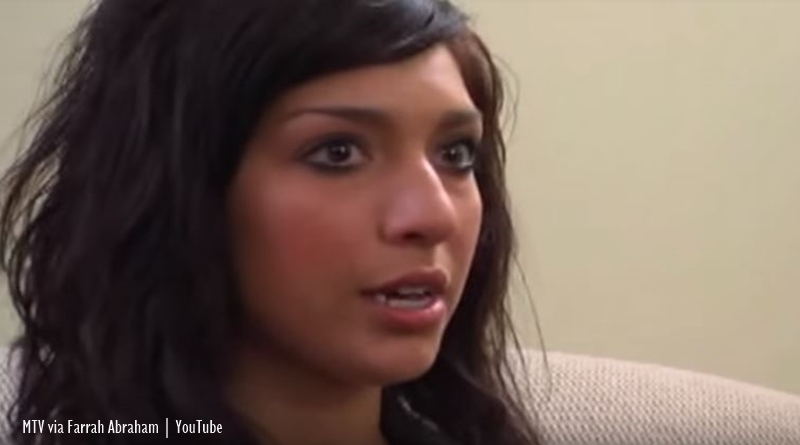 Teen Mom OG alum Farrah Abraham took to her Instagram on the 10th-Anniversary of the death of her baby daddy, Derek Underwood. Just after Christmas on December 28, 2008, Derek Underwood and Zachary Mendoza both died in a car accident. Derek, who attended Thomas Jefferson High School, dreamed of studying to become a chef. When he passed away, he left behind Sophia, Farrah’s daughter, who never met him. Farrah revealed the difficult struggle with depression during those dark days.

Farrah, five months pregnant and struggling with depression probably felt even worse because she and Derek drifted apart before his death. It took ages for the full unraveling of the story on both the 16 and Pregnant and Teen Mom OG shows. However, what people see on television and what really goes on may be quite far apart. What we do know is that Farrah suddenly faced a future with a child with no father.

Raising a young child without Derek probably left Farrah even more depressed and she addressed that in her recent Instagram post. Although their relationship soured, it seems Farrah Abraham at least expected him to be around to help with parenting. Farrah’s mom also clashed with her during that turbulent time. Plus, as she grew, Sophia seemed unable to understand why her daddy left. In previous Teen Mom scenes, we saw her daughter Sophia tell her mom she really wants a daddy.

In her note, Farrah said on Instagram, “I never thought I would get through the sadness, suicidal thoughts, depression, anxiety and hardships of loosing someone I loved this much who I thought I would be with today [sic]” While some trolls hit out at her for describing Derek as the “love of her life,” other followers of Teen Mom OG came across as supportive. After all, imagine being a teen, suddenly faced with pregnancy. Add the loss of her child’s father, no wonder she suffered depression.

However, Farrah’s message about Derek also brought some kind of happiness. Mainly, it seems that Sophia interacts with Derek’s family, and Farrah finds some sort of peace with that. She mentioned this, writing, “Seeing Sophia spend the night at her dad’s parents house on the 10th anniversary fills me with joy. {sic]” Actually, Farrah always made an effort to engage Sophia with Derek’s family.

Farrah won’t let the memory of her baby daddy die for Sophia. In fact, further into her Instagram message, Farrah said she believes he watches over them. She wrote, “today marks a new decade with the family and loved ones who held through this decade and now were filled with love, gratefulness, and confidence that we are blessed with the best angel of Derek watching over us.”

The controversial Teen Mom OG alum accumulated a huge following over the years. Since she opted to leave MTV’s Teen Mom, many of those followers slander her for her adult lifestyle choices. Nevertheless, other fans of the show came out supportive. One of them, caali9902, expressed how they felt: “May God shine his light for you & Sophia. Thankful Derek’s family is around for her, and thankful you showed her what love is all about. Much love for your New Year.”

What do you think about Farrah Abraham revealing her depression and suicidal thoughts at losing her baby caddy 10 years ago? Do you believe our dearly departed watch over us? Let us know your thoughts about the Teen Mom OG alum in the comments below. You can also see Farrah on Ex on the Beach Season 2 on MTV.