Things are not what they seem in the Little People Big World Roloff family. The head of the family, Matt Roloff, doesn’t seem eager to let his children get hold of the family farm. In an episode, the reality star didn’t take up the offers to purchase the property from his twin sons, Zach and Jeremy. After this, he went ahead and put the property up for sale.

This weird move on the father’s part has fans of the reality show speculating that he never wanted his children to own the farm in the first place. Initially, it seemed that Matt Roloff wanted his children to take over the farm after his retirement. However, his recent move has convinced Reddit users that he intended to do that.

One fan started the thread stating that he feels like Matt doesn’t want either of his sons to own the property. Plus, they speculate the negotiations he did were just for show. The fan also questions Caryn Chandler’s role in this entire process. 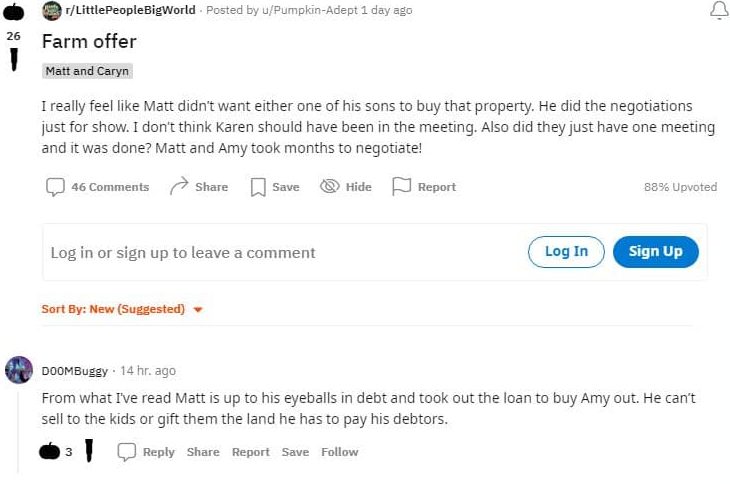 As per the fan, Caryn should have been left out of the meeting. Plus, the decision was made in just one meeting while it took Amy Roloff and Matt months to complete the negotiations. For the unversed, Matt Roloff owned his farm with Amy Roloff, his ex-wife. During the divorce settlement, the property was divided between the couple.

The thread continued with other fans agreeing to the fact that the reality star never intended to sell the farm to his sons. Another remarked that Matt is all about the money to build his wife her dream home. They speculate that as long as it gets him the money he wants, he really wouldn’t care who bought it.

The Reddit user also added that Matt still has to pay off his debts along with the remaining divorce settlement to Amy. Anything left after all his expenses would be used to build his dream home. Keeping all this in mind, the offer made by the twins was obviously less than desired.

Tensions Rise Between Matt Roloff And His Sons

In the latest season of Little People Big World, fans have noticed tension rise between the father and his sons. This was especially after young dad Zach was unable to get the farm at his desired price. As per The Sun, Matt has put up the farm for sale at $4 Million.

However, Jeremy found a silver lining in this chaos. The couple recently announced the purchase of a farm located in Oregon. The LPBW couple got a sweet deal for the farmhouse at $1.5 Million. The farm is about a 7-minute drive from the Roloff farm and boasts of 4 bedrooms & 4 bathrooms spread over two stories.

Do you think the fans are on to Matt? Did he really not want to sell the property to his sons?

Let us know your feelings in the comments.