Gwendlyn Brown proposed to her girlfriend, Angela Chappell, recently! Kody and Christine’s daughter popped the question in the comments of her girlfriend’s recent Instagram post. Was this a serious proposal? What did Gwendlyn’s girlfriend have to say in response to the question? Here’s everything we know about it.

As we have previously reported, Gwendlyn and her girlfriend have never really made their relationship official. But, they are constantly flirting with each other in the comments on Instagram. Likewise, they’ve both posted several photos of themselves spending time together. So, fans have just made the assumption for a while now that they were an item.

Her girlfriend’s recent Instagram post reveals she’s actually gotten close to several of Gwendlyn’s sisters. She shared several photos including one of Truely giving her a tarot card reading. Ysabel also chimed into the comments in a very playful and joking manner indicating the two were pretty chummy.

Ysabel penned in the comments as she responded to Angela’s caption attached to the post: “woah you scared me with that last one. not very nice.”

Angela responded: “im so sorry i tried to warn everyone.”

In the comments of this Instagram post, Christine and Kody Brown’s daughter pops the question and proposes to her girlfriend. “Marry me” she pens as more of a command than a question.

Her girlfriend does respond to the question, but her response isn’t really what anyone expected. 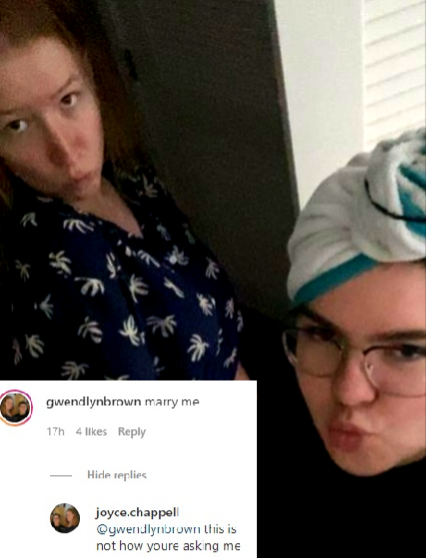 Angela did not shoot Gwendlyn’s proposal down. But, she did inform her a comment in an Instagram post demanding she marry her was NOT how she would be popping the question to her.

Angela fired back at Gwendlyn: “this is not how youre asking me.”

Was this a serious proposal?

Witty and sarcastic banter is a thing Gwendlyn Brown and her girlfriend Angela seem to do a lot on Instagram. So, it is unclear whether this was a serious proposal or not. But, it certainly sounds like Angela is ready to pull the trigger and settle down with Gwendlyn if she pops the question in a more romantic way than a comment on Instagram.

What do you make of their recent interaction on Instagram? Do you think this was a serious proposal? Do you think Gwendlyn and her girlfriend might tie the knot in the near future? Share your thoughts with us in the comments. And, keep coming back for the latest Sister Wives news.