Former Bachelorette Hannah Brown has an awkward holiday coming up. It seems her brother, Patrick Brown, got engaged which is fine but who’s he’s engaged to is crazy. Patrick got engaged to Hannah’s ex-fiance Jed Wyatt’s ex-girlfriend. Yes, that was read right. Hannah’s brother is marrying Haley Stevens. So, what does Hannah think about it all? Keep reading to find out more.

How does Hannah Brown feel about brother Patrick’s engagement?

US Weekly shared details about Patrick’s big proposal. Everyone in the family is excited about the engagement. However, many wonder how Hannah Brown is feeling about the whole thing. The proposal took place in Mentone, Alabama with both Patrick and Haley’s families around. Hannah was not there since she lives on the west coast now.

She reportedly showed her approval of Patrick dating Haley Stevens last month. However, she’s yet to comment on their engagement publicly. So, many wonder if she’s happy about it or not. 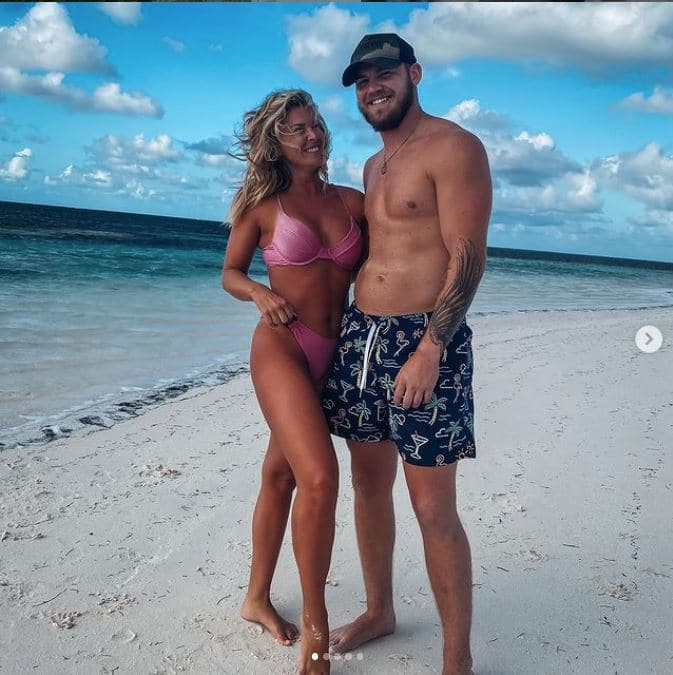 Last month Hannah said, “I love my brother and I’m just so thankful for all the changes that he’s made in his life.” She continued, “Because that just really impacted the way that our family dynamic is. Both of us have kind of gone on our own journey of healing.”

Hannah addressed his love life saying, “About his love life — I don’t choose who my brother loves and who he wants to be with, but I love him and want him to be happy.”

Hannah Brown picked Jed Wyatt on her season of The Bachelorette. However, their engagement was short-lived because it was said Jed was in a relationship with Haley Stevens.

Earlier in the year Patrick was linked to Haley. The two really hit it off and have been happily in love ever since. Jed has moved on from the entire situation and is dating Ellen Decker.

Sunday the news broke that Patrick proposed to Haley. He shared a photo on Instagram and said, “Went out and got me a fiancé for Christmas!”

Haley also went to Instagram to say, “12.18.21 ✨ I said YES to forever with my best friend!!✨…and it was perfect!💕Thank you to everyone who made this day so special! And to my FIANCÉ, I love you!!!💕 📸: @sledbetterphoto.”

That’s not all, Patrick and Hannah’s mother also commented on the big news. She said, “We got a new addition to our family this weekend and are beyond blessed!!! Haley thank you for making him so happy!! We love you❤️❤️.”

Stay tuned for more updates as they come out.