Kourtney Kardashian’s baby daddy Scott Disick might be going off the deep end, and fans are concerned. Over the last few years, the celeb’s dating life has definitely been in a lurch. Those close to him are worried that it’s starting to take its toll on Scott’s mental health. How has Amelia Hamlin’s recent tantrum played into this? Read on to find out how Scott is coping with all of the new changes in his personal life and why fans and loved one’s think it’s going to get worse before it gets better.

The End Of All Hope

Scott Disick and Kourtney Kardashian called it quits back in 2015. The pair have three beautiful children, and despite their best efforts – they opted not to continue the relationship together at that time. Over the last few years, the pair have remained close friends and have successfully managed to co-parent their littles in a healthy way.

Unfortunately, while he and Kourtney were both dating other people, Scott never quite moved on. Fans watched, many with empathy as Scott continuously held a candle for his ex, hoping one day they would eventually rekindle their relationship. In fact, those who watched the final season of KUWTK will remember that a huge part of the plotline was Scott attempting to reconnect with Kourtney romantically.

Sadly, for Scott, it seems to be the end of the line. After Kourtney Kardashian’s recent engagement to rocker, Travis Barker, it’s clear that Scott’s chances of winning Kourtney back are slim to none. According to E!, the situation has left him very bitter. The reality star is reportedly “beside himself,” consumed in his own grief over the finality of losing Kourtney.

As previously stated, both Kourtney and Scott did see other people after they parted ways. Scott’s most recent committed relationship was with Amelia Hamlin. The relationship lasted just over a year before going sour. The two officially split in September of this year.

No less than six weeks later, Scott was spotted getting snuggly with an unnamed female, hanging out beachside in photos captured by the press. Obviously, this didn’t sit well with Hamlin who decided over the weekend to take a pop shot at Disick with her latest Instagram post.

In her snap, the 20-year-old celeb-child flipped the camera the middle finger. Amelia captioned the photo: “Rly Rly Happy.” Fans in the comment section immediately assumed the post was directed toward Scott, and quickly chimed in, adding to the insult.

Unfortunately, between the trainwreck that was his relationship with Amelia and the carnival that was his marriage with Kourtney, poor Scott Disick doesn’t appear to be doing too well mentally. This has left fans and loved ones worried that he may start lashing out (more than usual).

Refocusing On The Future

It has been just over a week since Kourtney said yes to Travis inside their little beachside ring-of-rosies. Since the news broke – Scott had been nearly silent on social media, further adding to people’s worry about his mental stability. Then, four days ago, a post from his Instagram reveals that the celeb just had new tires put on his outrageously expensive red Ferrari. The celeb shared a snap of the car on the back of a flatbed, driving down the highway. 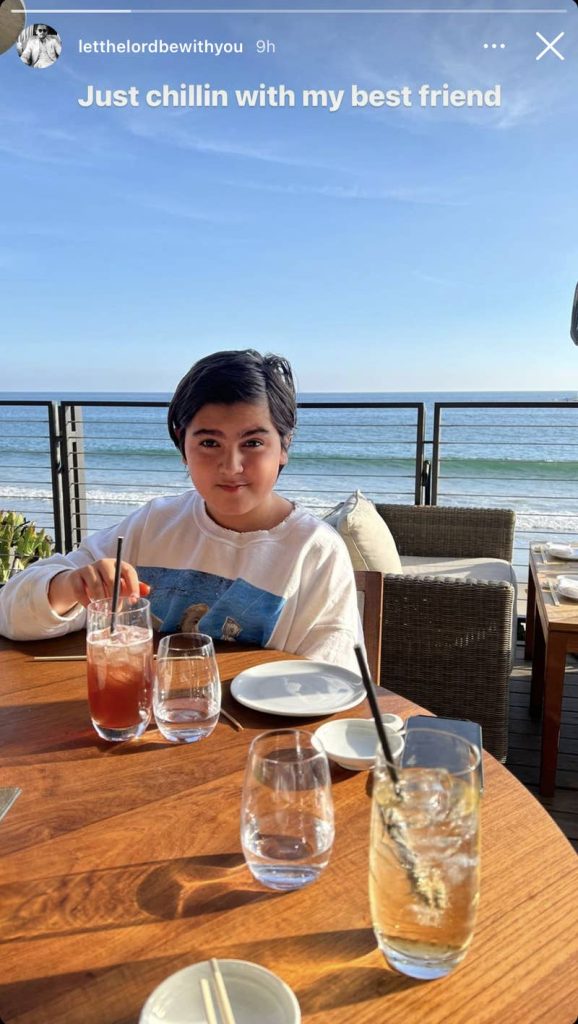 Then, on Sunday, Scott added a new photo to his Instagram story, something he hadn’t done in quite some time. The photo featured Scott and Kourtney’s son, Mason smiling in front of the camera as he sat at a table on an ocean-front balcony with Dad. The two appeared to be enjoying a nice meal and some quality time together. “Just chillin’ with my best friend,” Scott wrote across the picture.

Other than these two posts, the celeb has remained silent since the bomb of Kourtney’s engagement was revealed. Close friends are hopeful that while still devastated, Scott will pull himself together, and start moving that focus toward his children. Without Kourtney to focus on, he may continue to build healthy relationships with all three of his children.

Stay tuned to Tv Shows Ace for the latest on all your favorite reality stars!