Bachelor Nation doesn’t have to wait long this year for more drama to begin. There have been back-to-back seasons of Bachelor franchise shows. Normally, fans would have to wait until January for their Bachelor fix following Bachelor in Paradise. However, this year, ABC decided to go with two seasons of The Bachelorette. Michelle Young is the newest lead and fans can see her begin her journey on October 19. So, the season hasn’t even premiered yet, but Reality Steve is already dishing out who Michelle gives her final rose to. Warning! Spoilers Ahead!!!

Since the pandemic kicked off in 2020 filming for The Bachelor franchise has been pretty much in a bubble. Michelle Young’s season of The Bachelorette is the first time the show has traveled in more than a year. Plus, the upcoming season of The Bachelor is back at the mansion and most likely traveling as well. Things are finally returning to a new normal for the franchise.

But, back to Michelle’s season. Reality Steve has been able to spoil a few dates that were filmed in public places. Some of those were her one on one date with Joe Coleman. He went on a date to the Minnesota Twins date. Then, Nayte Olukoya got the boating date on Lake Minnetonka.

Following that there was a group date with ten men that Steve was unable to verify faces on. However, he did say new Bachelor Clayton Echard was on that date.

That’s pretty much all Steve is aware of at the moment. However, he does know the big piece of information die-hard fans want to know. He knows who Michelle Young chose to give her final rose to. Plus, he even knows who got second place.

According to Reality Steve Michelle Young gave her final rose to Nayte Olukoya. The two are engaged. 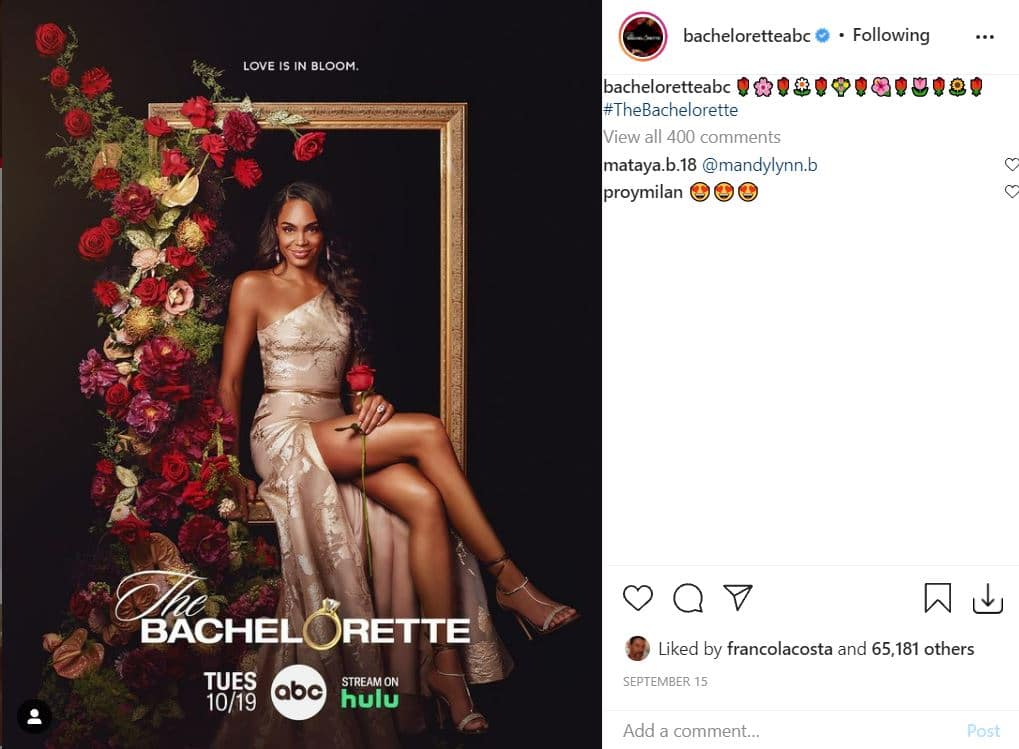 Who is Nayte Olukoya?

Nayte is 6’8”. He’s originally from Winnipeg and went to college at Eastern Washington University, and now resides in Austin, TX. Before the show began he was working for Indeed.com. However, it’s not clear whether or not he returned to that job.

According to his Bachelorette bio, Nayte’s “dream woman is outgoing, spontaneous and has enough swagger of her own to keep up with him. He’s looking for a connection filled with heat and for someone who will be just as passionate about him as he is about her. Nayte is looking for a teammate for life and is confident that Michelle may just be the one he’s been waiting for.”

(SPOILER): Michelle currently on a 1-on-1 date with two of her female friends and Nayte Olukoya. They took a pontoon boat out on Lake Minnetonka then arrived at Lord Fletchers where Michelle & Nayte played volleyball with her two friends. pic.twitter.com/z1aHAhgXMl

Who was the runner-up?

Steve was also able to tell fans who the second place winner is for Michelle’s season. He went to Twitter to share the spoiler. He said, “Well thank you for that preview of Michelle’s season ABC. Now I know who the #2 guy is on her season, since you know now who won as I spoiled earlier today. Her #2 is Brandon Jones.

(SPOILER): Well thank you for that preview of Michelle’s season ABC. Now I know who the #2 guy is on her season, since you know now who won as I spoiled earlier today. Her #2 is Brandon Jones. pic.twitter.com/WWy1PZIYfQ

What do you think about Michelle’s final two men? Are you excited to watch her season play out?

Don’t miss the season premiere of The Bachelorette October 19.