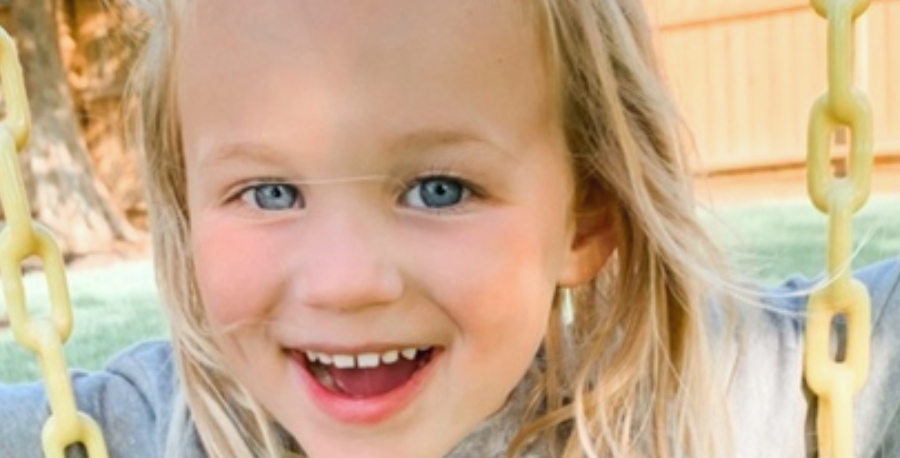 OutDaughtered fans know that Riley Busby always led the rest of the quints in being top-dog. Always keen on getting camera time, and often the center of attention, she sometimes seems rather pushy. However, fans adore her for a number of reasons. Firstly, she seems way easier to tell apart from her other sisters. Her blue eyes are so bright, and her pixie grin gets her all the attention she might crave. Now, fans noticed another physical feature that sets her apart. She seems to have “big guns” for a small girl.

Riley Busby often goes a step further than her sisters and she seems very courageous. In fact, back in May, some TLC fans became alarmed as she climbed up on top of the rocks. However, she seemed unafraid as she explored her boundaries. Some fans claimed that she’s a tomboy. Well, that caused an argument about stereotypes. However, other fans just love her. One fan said, “There’s Riley the fearless, daring, wild child ❤️ and perfect just the way she is.”

OutDaughtered fans know that Riley Busby seems a bit bossy, and unafraid of trying anything first. In fact, when they visited the Houston Zoo last year, her mom, Danielle spoke about how a dinosaur-like dragon seems like her spirit animal.  The List reminded readers that Adam claimed, “Riley…thinks everything is about her and she will not back down.” Well, bossy and adventurous and brave Riley certainly looks like she grows the physique for physical activity. In a new post by her dad, TLC fans noticed that she’s got “big guns” for her age.

The TLC family visits Lake Charles at the moment, Riley shows off her guns

Adam told his fans that the OutDaughtered family visits Louisiana. Back home, Riley Busby and the rest of the kids couldn’t use the swimming pool as some experts work on it at moment. However Nana has a pool, so the kids enjoy themselves in Louisiana. On Saturday, July 26, Adam shared a photo of his bossy-boots daughter in the pool. His caption read, “A little rain ain’t stopping these kids…”

In the comments section of the post, OutDaughtered fans noticed those strong muscles in Riley’s arms. One of them said, “She has some big guns tho 💪🏻.” Then, another fan said, “Wow…look at those pecs and shoulders !! Beast Mode Riley…she’s so feisty !! I love that about her.”

What do you think about Riley Busby displaying her big guns? Do you think she might follow her mom into hitting the gym and staying ultra-fit? Sound off in the comments below.

Remember to check back with us often for more news about TLC’s OutDaughtered star, Riley Busby.