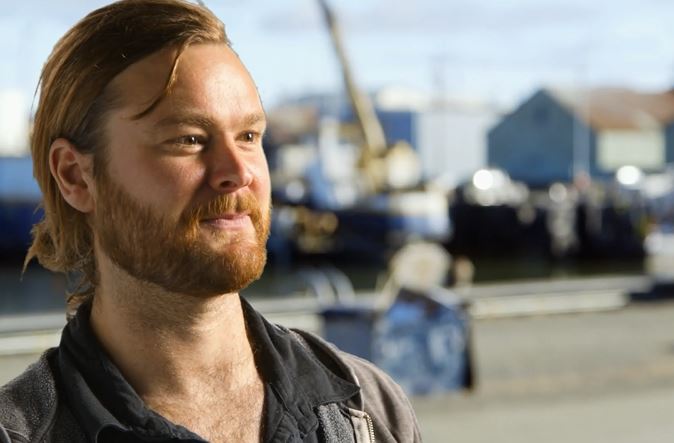 Tonight on Bering Sea Gold, our TV Shows Ace exclusive clip is riding with Zeke Tenhoff. Though we cannot confirm or deny it, he appears to be enjoying a 420 moment of having some extreme munchies while exploring Cape Rodney on his sailboat dredge.

Aboard with his crew, he proposes a snack, and the berries he is eating were likely fished right out of a garbage dumpster, probably at some grocery store.

Zeke is known as the fleet’s mad scientist, and it is his unique dredge, a sailboat dredge called the Black Swan, that is turning heads in Nome.

Discovery notes that this design is more “seaworthy than most dredges,” enabling him access to deeper and more remote claims.

Zeke Tenhoff rejoining the cast out on the water with the price of gold headed for the stratosphere.

A native Alaskan by birth, Zeke Tenhoff has a history with the show’s star, Emily Riedel.

Zeke has had the classic off-the-grid upbringing, homeschooled, adept at handling the mercurial Alaskan climate, and now an independent gold miner.

As for his deck mates, this season, Zeke’s rock star crew includes his brother and rock and roll frontman Sam Tenhoff, as well as his bassist Raven.  Discovery says: “Zeke may not know how to sail, but that’s not going to stop him from chasing the gold.”

And when it comes to working, Zeke should work for himself. He has always been the boss. His ability to dive, prospect, and innovate has enabled him to survive in Nome’s difficult and changeable environment.

According to Discovery, “Last season a cash-strapped Zeke reluctantly turned to a former flame, Emily Riedel. He was the engineer. She was the bank. Together, they ran a dredge.”

There were arguments and disagreements and occasionally hot tempers, yet the two former romantic partners did form a successful and profitable partnership despite all the relationship baggage.

This season also sees Zeke is continuing his alliance with Emily as they search for the honey hole of gold nuggets off the coast.

Their intended spot to explore for more gold is rife with some scary lore.

The first stop is Sledge Island: a mysterious, deserted, volcanic formation twenty-six miles into the Bering Sea. Known for plane crashes and shipwrecks, this “Bermuda Triangle of Nome” is fabled to have mounds of gold in its unexplored waters. If the pair can pull off the trip and find treasure, they’ll be foremost in the discovery of new gold-laden mining grounds outside of Nome.

Nome’s King, “Mr. Gold, aka Shawn Pomrenke, edges closer to his goal of ultimate domination. Knight Kris Kelly, fresh off his alluring disco tour from last week of a large metal dredge, tries his hand on an excavator dredge. And Queen Emily Riedel has a pump crisis that could put an end to her season. And for Vern?  He leans on his last diver.