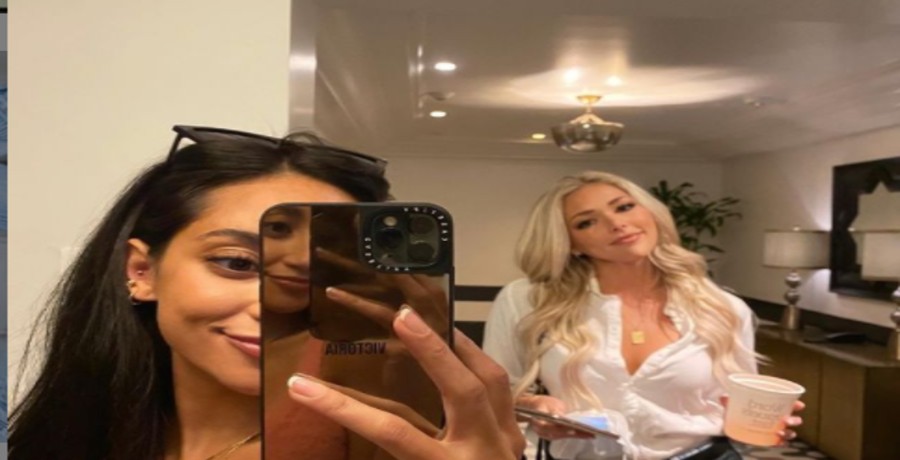 Nashville had a lot of Bachelor favorites hanging out this weekend. Kelsey Weier shared a picture of her, Madison Prewett, Kiarra Norman, and Victoria Fuller in matching bikinis in the pool. Madison commented on it, “ready for your birthday.”

A look at Kelsey Weier’s story showed Spencer taking shots by leaning his whole body back. And another shot showed her at dinner with Spencer and what looks like Chasen Nick. A trip to Spencer’s Instagram has a picture of him with Chasen and Chris Randone.

His story shows a video of him walking with several of the men on Victoria Fuller’s story. Additionally, they are with Blake Horstmann, Clay Harbor, Chris Bukowski, and Ed Waisbrot in a different video. Ed and Chasen are the only ones from the most recent seasons. None of the ladies from Matt’s season are present.

They All Celebrated Kelsey Weier On Her Birthday

Kelsey Weier and Victoria F, self-proclaimed best friends, hail from Peter Weber’s season. Kelsey turned thirty and it looks like a lot of her reality television friends came to help her celebrate. Blake had videos of dinner and the after-party at the Virgin Hotels in Nashville.

Victoria Paul shared a video of Chris Randone getting his hand stuck behind the booth. When he finally got it out his hand was bleeding. Randone shared the below picture of the boys and captioned it, “Bachstreet Boys.” There are a lot of potential Bachelor in Paradise candidates out in Nashville. The picture is in the gym. Several fans wonder if they were going to the beach, because they’re getting buff. One of the things they often show on BIP is the guys working out and complimenting each other’s muscles. With no BIP last summer, the candidate list is rich with possibility.

While not everyone was at Kelsey Weier’s birthday party, the stars do all get together to hang out a lot. Nick Viall’s ex and BIP star Jen Saviano was on Chris B’s story and Clay Harbor was on hers. Kelley Flanagan showed up on Kelsey’s Instagram. Chasen Nick recently did a wine tasting video with Spencer and Mykenna Dorn. Kelley told Blake in an Instagram Q and A to make sure Kelsey had a good birthday sparking rumors they were dating. She told him this because she wasn’t able to make it for her birthday.

Like TV Shows Ace reported, Blake Horstmann hasn’t tried talking to any of Matt James’ ladies. He told Here for the Right Reasons none of the women were likable enough for BIP. While he blames producers for their portrayal of the women, he admits, however, some of the women were scary. What do you think about them all hanging out together? Who is your dream couple for this upcoming season of BIP? Share your thoughts in the comments.