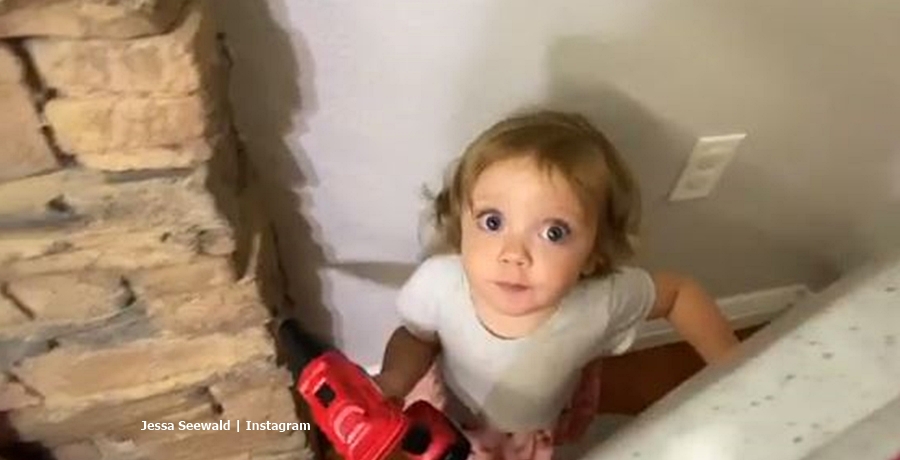 Counting On fans adore Ivy Jane Seewald, the youngest child of Jessa and Ben. Actually, her arrival brought a whole new level of cuteness to the family videos and Instagram posts. Bright as a button, she brings lots of smiles to the faces of TLC fans. Now that Jessa shared a photo of her daughter with her hair up in a ponytail, it reveals an almost startling likeness to her aunt, Jinger Vuolo. At least, some fans think so.

Spurgeon and Henry, Ben and Jessa’s sons seem taken with their little sister. In fact, they sweetly let her play in the couch fort that they built. Mind you, they got on with trying to shoot each other with toy guns while Ivy played “peekaboo” with her mom.  Not long after that, Ivy sneaked a bit of slurping time off her big brother’s jawbreaker. Fans laughed because the cute kid showed no remorse. However, Jessa said that luckily, Uncle James keeps the kids supplied with those.

This week, the Counting On kid appeared in another photo on Instagram that her mom shared. Jessa captioned the photo with, “First time trying out a ponytail on Ivy Jane!” Next, she exclaimed about how much “older” it makes her look. Actually, fans agreed that she suddenly looks like she outgrew being a baby. In fact, she’s going on two-years-old. At that age, kids seem to grow very fast. Hopefully, the sweet-natured child doesn’t bring too much stress in her terrible twos.

Of course, fans already heard that Counting On‘s Ben and Jessa expect another baby. Today reported on it in February. It comes after the devastating news that Jessa previously suffered a miscarriage. So, if Ivy Jane Seewald retains her sweet personality that might help Jessa when the new baby comes along. Looking at her sweet little face in Jessa’s post, it’s hard to imagine her being too naughty.

In the comments section of Jessa’s post about the ponytail, many people expressed surprise. Comments came in about how much like Jinger Duggar Vuolo Ivy looks. One Counting On fan noted, “She looks so much like Jinger too 😲.” And another one said, “That first picture is a tiny Jinger! Wow!! She’s adorable :).”  Someone else agreed that Ivy Seewald looks like a “cross between [Jessa] and Jinger.”

Actually, Counting On fans know that when they were kids, Jessa and Jinger, born only about 400 days apart looked very similar. And some fans think that Josie also takes after her two big sisters. Do you agree that Ivy Seewald looks quite a lot like her aunt Jinger? Sound off your thoughts in the comments below.