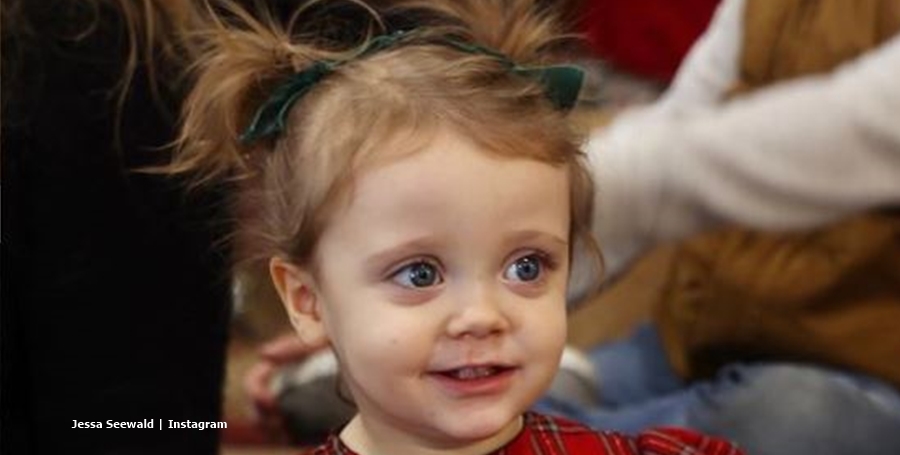 Jessa Seewald’s daughter Ivy brings the cutest scenes to her mom’s YouTube channel. The fun and charming ways of Spurgeon and Henry’s baby sister just keeps coming. And fans of Counting On can’t get enough of her. Now, she played being a mommy, and she sang a lullaby to her own baby doll. Just three months shy of two years old, she really sings very sweetly.

In her caption on YouTube, Jessa told her fans that her husband Ben often sings a lullaby to Ivy. And clearly, she learned the words perfectly. In the video that she shared on February 1, Ivy sat down and cradled her doll. Then, she rocked it and sang Rock-A-Bye-Baby. Notably, she knows the first verse perfectly. And she kept the tune as well, as she sang the lyrics: “Rock-a-bye baby in the treetop. When the wind blows the cradle will rock.” You can see the cute video further down in this article.

Counting On fans regularly see videos of the kids, Spurgeon, Henry, and Ivy. So, they literally see the kids grow up before their eyes. In recent months, fans saw Henry and Spurgeon build a couch fort. Ivy enjoyed that so much. And she kept peeping her head out to play peek-a-boo with Jessa Seewald. Very pretty and smiling her huge smile, she really knows how to capture the hearts of plenty of Duggar fans.

Earlier this month, we reported that Jessa walked into the dining area and caught Ivy snacking away on her “big brother’s jawbreaker.” Jessa couldn’t help but take some snaps of her adorable daughter who looked very self-satisfied. And who could possibly stay angry with her? Hopefully, Spurgeon accepted the loss of his tasty treat that Uncle James gave him.

TLC fans suspect that Jessa Seewald and her husband Ben might soon announce that they expect baby number four. In several recent photos, it seemed evident that she hid her tummy from her social media followers. It’s hardly impossible after all. Fans know that the Duggar family loves babies. And while plenty of kids float around the extended family, fans really love Ivy. She’s cute, pretty, and such a bright personality, they can’t help but love her.

TV Shows Ace reported earlier in January that Ivy’s dad ben became a pastor. As a pastor’s wife, Jessa Seewald probably spends quite a lot of time with other young moms in her church community. No doubt little Ivy meets lots of other little kids her own age.