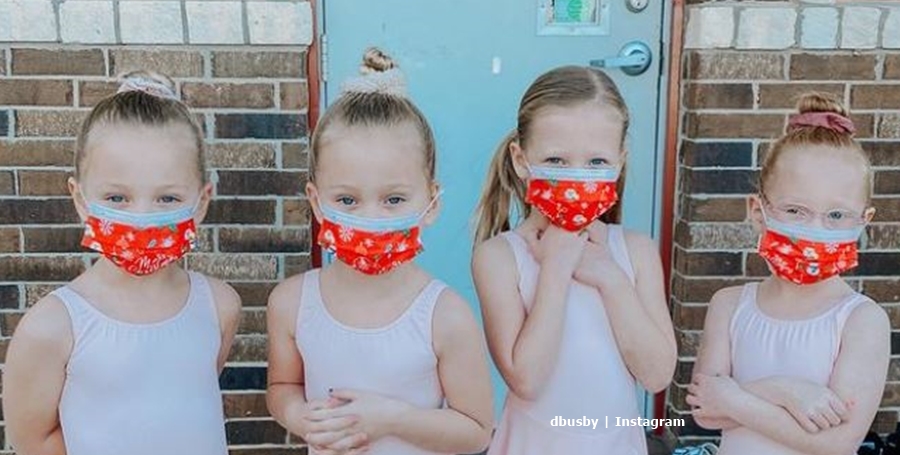 OutDaughtered returns with an eighth season and the TLC crew filmed the ballet classes that the quints attended. The premiere date, still not revealed, might come along soon though. Recall, the last season ended after just a few episodes because of the coronavirus. Fans feared the Busby family might never return as at one stage, Adam said they took a break from filming.

OutDaughtered quints learn ballet and the crew film it

We reported last year, that Adam Busby said they started filming for Season 8. However, he never told fans when they should expect the premiere. Fans knew they stopped the previous season after just a few episodes. And later, when the kids started school again, he told them they took a hiatus for that. However, it looks all back on track now, as the TLC crew filmed their ballet classes.

Recently, Danielle shared about the OutDaughtered quints learning ballet. Actually, it looks like Riley hated the idea. And, a few of the other quints initially thought they liked it until the lessons began. Asking her TLC fans which quint fans thought enjoyed ballet the most, they all suggest Parker. After all, her eyes literally shone in the photos her mom shared. Fans believed Riley might hate it as she was conspicuously absent from the picture that Danielle shared.

Which ‘OutDaughtered’ Quint Loves Ballet The Most?

On Friday last week, Adam Busby shared another photo of the quints learning ballet. It came on his @itsabuzzworld account on Instagram. Adam said he took the photo of the crew filming the pretty little girls. They wore their masks and cute little ballerina outfits while the cameraman and the sound guy worked. In his caption, Adam also said “Who’s ready for the cuteness? @outdaughtered.” Of course, multitudes of TLC fans put up their hands for that. And over 70k people liked the post.

Once again though, Adam didn’t share any premiere date on the post featuring the crew filming the ballet class. Fans asked, “when?” But he never replied. One OutDaughtered fan wrote, “I can’t wait till y’all can give us a premiere date!!! 💖💖💖💖💖.”

Then another one asked, “Is there a vlog on the girls dance lessons? 🥰”

Well, Adam usually puts up scenes fans don’t see much of on TLC. So probably, fans need to wait until the show premieres for that.

Pestering for the premiere date

Other fans pestered Adam for the premiere date of OutDaughtered, but he ignored every one of them. And, perhaps he can’t actually say. One positive thing might relate to the fact that he shared the filming scenes now. So clearly, TLC notifies fans of the show’s start date soon.

Many OutDaughtered fans sounded delighted when they saw the crew filming the ballet classes. They simply can’t wait for more of the cute Busby quints!