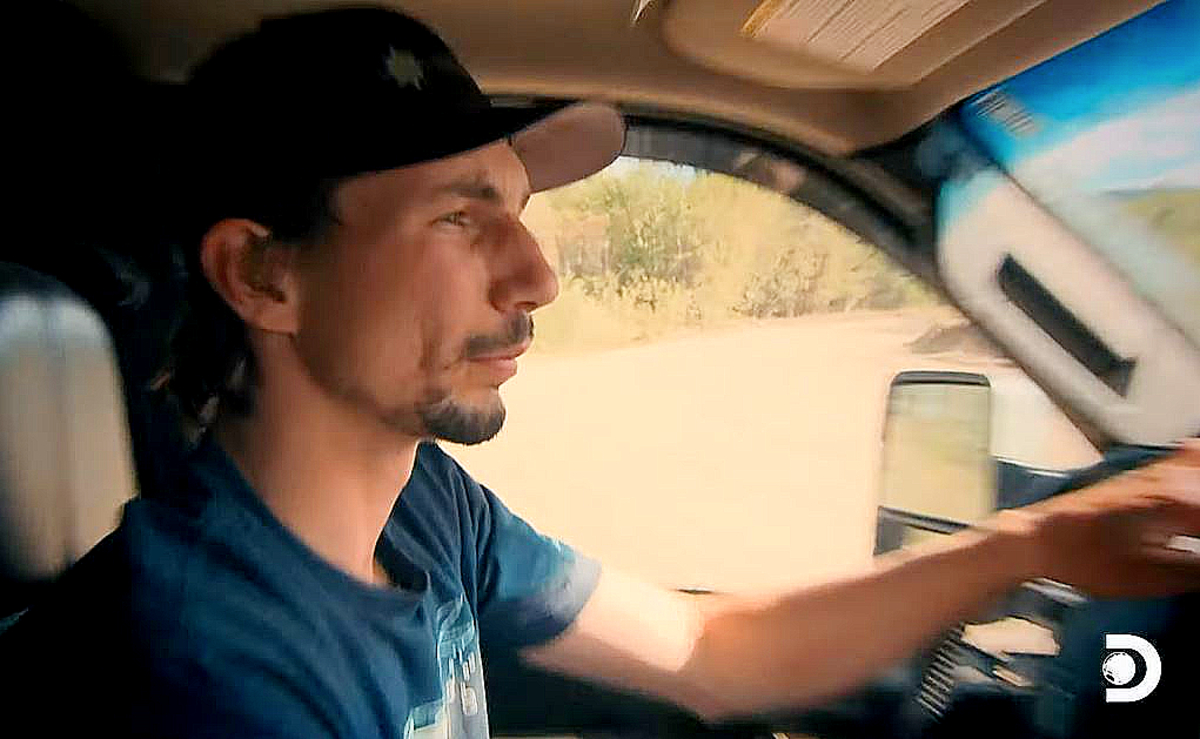 On Friday night’s Gold Rush, Parker Schnabel’s team is trying to move a huge trommel down the road to the airstrip.

Our exclusive TV Shows Ace clip opens at Indian Creek as Stephen Salyers is moving on out, carrying a heavy and huge hunk of machinery on his truck bed as boss Parker Schnabel follows him in his pickup truck.  Salyers appears to be driving a bit too fast for this high center of gravity load.

The balancing act will definitely have you holding your breath.

The twisty rough road has jostled the weighty cargo so much that the moorings and metal chains holding on to the truck are starting to fail.

The clip ends with a lot of shouting, which is never good.

According to Tony Beets, gold is currently topping $1900 an ounce, and the heat is on.

Elkhorn Claim’s Fred Lewis checked in with a gung ho attitude but little to show for it. One of his men, Kyle Pletzke, proved his mettle to Fred as we learned more of his military service and how he overcame a serious injury. But Fred was beset by one mechanical disaster after another including clogged hopper issues.

Up in Paradise Hill, Tony Beets was called upon by Parker Schnabel to help with his season.

The reason? After four years of mining, Brennan Ruault’s Big Red was running out of pay dirt, as was Sluicifer which is run by Mitch Blaschke. Parker needed to scramble. Now his bid to get the airstrip pay dirt by Indian River involved him having to negotiate with Tony.

If you remember last season, Tony had to go to Parker for help. It went south. Now, the tables turned for Parker. He asked Tony if he could mine the strip, and one giant pregnant pause later, pragmatic Tony agreed and they shook hands on it.  The expediency of the deal left Parker confused by the ease of it.

New blood on Team Schnabel as J.M. Mercier is now working with Parker, and so is Nick Patterson at the airstrip. Both were seen last week getting the pay ready for Mitch and Sluicifer.

The Beets are working overtime to at Dawson City, Paradise Hill and Moose Creek. Beets’ season goal is 3000 ounces, not including the royalties now he will be collecting from Parker.

The last episode also had major drama as we saw Mike’s truck ignite into a deadly electrical fire inferno. The cab was ruined but the trailer was spared.

Tune in to see how the airstrip work is going as Parker’s team has to secure the trommel and get Sluicifer down to the new pay.

Gold Rush will air this Friday at 8 pm on Discovery.
then Gold Rush: Freddy Dodge’s Mine Rescue airs at 9 PM also on Discovery.