1000-Lb Sisters’ viewers recently found out that Amy Slaton is pregnant. Unfortunately, not everyone is sharing her joy. Reportedly, Amy’s family members are attacking her over pregnancy weight gain. Read on to get the details.

Amy Slaton Was NOT Supposed To Get Pregnant

As TV Shows Ace recently reported, 1000-Lb Sisters’ Amy Slater was not planning to have a baby this year. In fact, she had an agreement with her doctor that she would refrain from pregnancy for at least 2 years. The reality celeb recently underwent bariatric weight loss surgery and her doctors knew pregnancy could be risky so soon after the procedure.

As luck would have it – Amy’s body had a different plan and despite her agreement with the doctor, Amy revealed on a recent episode that she was indeed, pregnant.

Just four months post-op, Amy Slater’s doctors worry that Amy’s already high-risk pregnancy could be made even more dangerous by potential post-op complications it could cause. Her doctors, however, aren’t the only ones upset by Amy’s ‘lack of judgment.’

Is Amy Eating for Two or Just Over Eating?

While Amy Slater’s pregnancy is recent news to 1000-Lb Sisters’ fans, the TLC star is actually more than four months in. At just under half-way to her due date, Amy’s family has taken issue with the amount of weight she has gained back during the pregnancy.  To date, the 1000-Lb Sisters’ star has lost more than 124 pounds total – pre and post-op. Despite this incredible achievement, her siblings worry that her priorities have shifted since she found out she was expecting. They fear that if Amy regains the weight she worked hard to lose, she could hurt her body and possibly even reverse the surgery accidentally.

According to People One of the family’s main complaints is they feel Amy is using the baby as a ‘crutch’. They feel that she has fallen back into her former unhealthy eating habits and is leaning on the pregnancy to justify her weight gain and over-eating.

In a recent episode of 1000-Lb Sisters,  Amy Slaton’s sister, Tammy, and brother, Chris, confronted the expectant mother about their distaste for her choices. During the confrontation, Amy’s siblings were very blunt about their concerns, giving seemingly very little consideration towards their sister’s heightened emotional state.

“We need to get you back to where you need to be on your diet,” her brother tells her sternly. Her sister, Tammy Slaton who also suffers from weight issues at nearly 600 pounds, told their brother that Amy uses her pregnancy as an excuse.

Amy’s siblings remind her of how many times she has told them there are activities that she ‘can’t do’. They also point out several occasions where her reason for excessively overeating was ‘because the baby wants it’.

The entire conversation leaves the mom-to-be feeling attacked.  Hurt and hormonal Amy began to cry, telling her siblings that she can’t help that she ‘has cravings because of the baby.’ “I wanna enjoy my baby, I wanna be enjoying my pregnancy, okay? I’m sorry,” she adds, tears streaming. 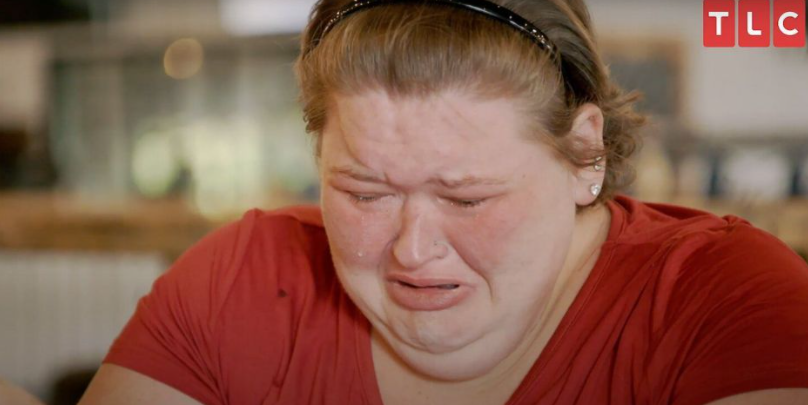 Tammy and Chris Say They Are Concerned

Tammy worries that having a baby isn’t the safest route for Amy. Both she, and her brother, were already concerned about the potential complications that the pregnancy might cause. Now, four months in Amy’s siblings are now even more concerned. They feel she is contributing to the risk by making horrible eating choices.

During interviews away from Amy, both reveal that their motivation is not to attack. They love their sister very much and want to see her happy. Both are committed to giving her the tough love she needs to stay motivated. They want to see their sister live long enough to enjoy having children and watch them grow.

“Amy gets upset because she feels like we’re attacking her, but we’re really not, we’re just trying to get her to open her eyes and see that the things she’s doing isn’t the right choices,” her sister adds.

How do you feel about the Way Tammy and Chris approached Amy with their concerns. Is it tough love or an attack? Let us know in the comments.