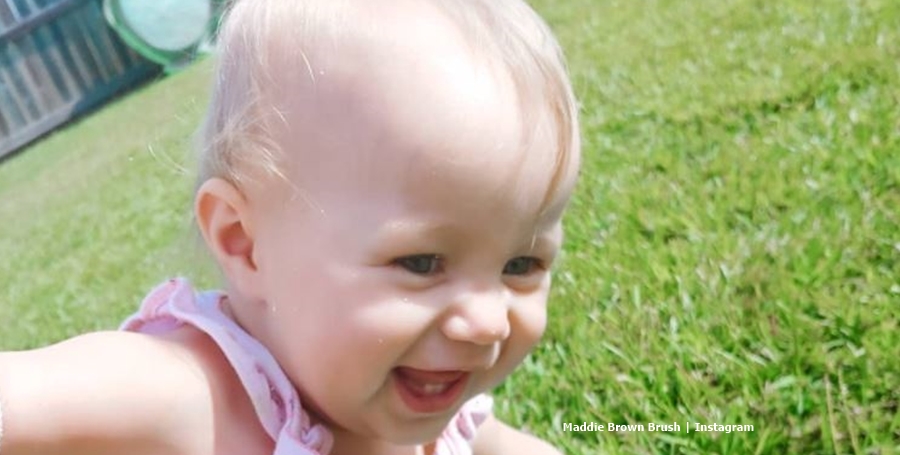 Maddie Brown Brush enjoyed a special Thanksgiving this year. Not only did she catch up with Hunter Brown, but little Evie K started walking by herself. The happy news came on her Instagram Stories just weeks after the Sister Wives‘ star shared a picture of Axel holding his little sister upright.

We reported on November 14, that Maddie Brown shared a photo of Evie K with her brother Axel. Not yet walking on her own, Axel helped her stand up. And fans felt happy because it was the first photo of the little girl wearing her prosthesis. Delighted, Maddie captioned her photo with, “The lemons seemed fitting! 🍋”  We noted that “on her false leg, Evie wore an attractive little lemon sock. Either that or the prosthesis came with lemon decorations.”

By now, it’s likely that every Sister Wives’ fan knows that Evie K arrived with FATCO syndrome. Later, Maddie Brown Brush and Caleb opted for a Boyd amputation. Monsters and Critics noted that the amputation “is relatively new. With the surgery, the foot was amputated at the ankle, but the heel pad was preserved so that Evie will have a more natural gait and engage more of her muscles than if the heel pad was removed.” And now, it seems it worked perfectly as Evie walked alone.

In a series of clips, Evie walked across the lounge as Caleb and Hunter looked on. No doubt, much joyful cheering happened afterward. Maddie captioned her Story with “We have a walker!” One can almost imagine the relief and joy, and emotions of the family during that special moment. Bear in mind, Maddie and Caleb took some heat when she shared about the amputation.

At the age of one, Evie underwent the amputation and Maddie Brown Brush shared about that on Instagram as well. Some shocked fans expressed their horror as it seemed rather radical. But Maddie assured them that the Sister Wives’ family took advice from specialists and also from other FATCO sufferers. All they wanted for Evie K is a good quality of life.

Is Evie K walking on time?

For months, fans saw Evie K pull herself up and scoot around. But her physical challenges may have slowed her walking development by a few months. Parenting Science notes that “in the United States today, the average age of independent walking is approximately 12 months.” Well, Evie arrived in August 2019. So, she’s slightly older than the average child who walks independently. No doubt, now the daughter of Maddie Brown Brush walks alone, there’s no stopping her from here on.

What do you think about the little star of Sister Wives walking alone? Did the news cheer up your day? Sound off in the comments below.