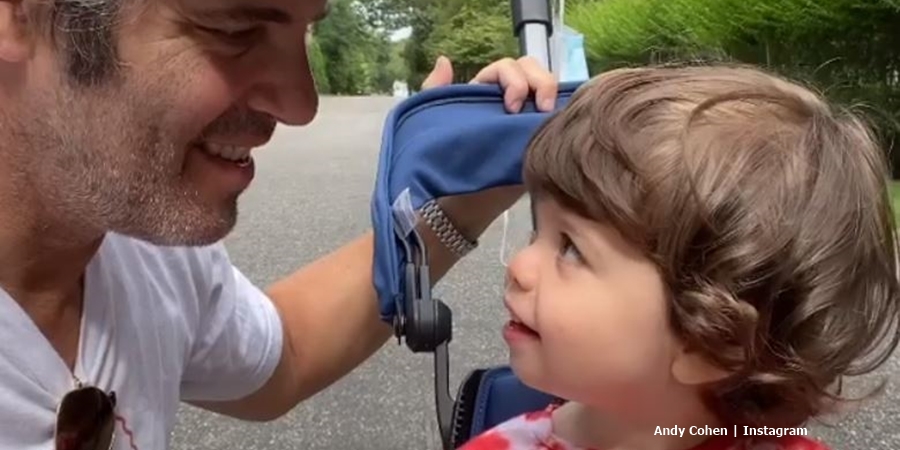 Andy Cohen fans adore his son Ben. He’s at that age where he enjoys exploring the world and walks around happily. As the Bravo host often shares his son’s milestones, fans feel he grows up before their very eyes. And now, they simply love that he thinks Dolly Parton might actually be God.

We reported in July, that as Andy and his son started walking and exploring a bit, Ben went through a stage where he started eating sand. Andy said it became his “favorite breakfast.” Well, most kids go through that stage. So many fans reassured that he probably wouldn’t die from it. Now going on two-years-old, he loves his trucks and develops an inquiring mind.

Fans agree that Andy Cohen raises his boy right. And many of them call him a “parenting goal.” In fact, Fabiosa.com reported that many fans call him a “fantastic parent.” Andy’s so dedicated and spends a lot of time playing with his son. Plus, he changed his entire lifestyle so they spend the most quality time together. Fans who agree Andy does a good job probably love the idea that Ben doesn’t assume God’s a male.

On November 19, Andy took to his Instagram and shared a picture of Ben. He stood with one of his toy cars and looked up at a picture of Dolly Parton. He pointed one finger at the picture. Then in the caption, Andy wrote, “Is she God, Daddy?” Of course, that totally melted the followers of the Bravo host. However, many people think he’s not wrong in that assumption.

Many fans of Andy Cohen commented, “Yes, She is!” Meanwhile, those of a more religious bent felt that she at least qualifies as an angel. And others asked Andy what he told Ben about Dolly and God. Of course, lots of people love Dolly. One follower said, “Such a wonderful, caring human being! We love Dolly!❤️” And then, people started talking about her kindness and generosity in respect of the COVID-19 vaccination search.

CNN reported three days ago, that Dolly Parton helped fund coronavirus research at “Vanderbilt University.” And some of her money also helped fund “Moderna’s Covid-19 vaccine, which this week became the second coronavirus vaccine with a stunningly high success rate.” So right now, many people think she truly cares and loves her fellow human beings.

If Andy Cohen’s son Ben knew about that, he’d probably not ask about her being God, but declare her as God. Actually, because of people like Dolly, the future looks a lot brighter for kids just like Ben. Sometimes, the real truth about the inner hearts of people comes from the mouths of little kids.