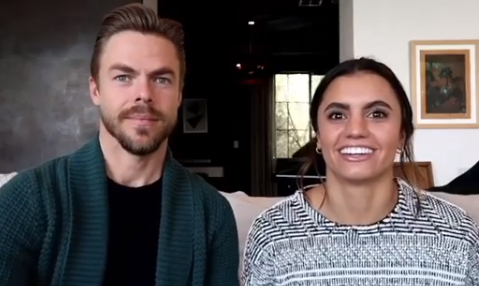 In case you didn’t hear, Derek Hough will perform during the Dancing With The Stars Season 29 finale. He already performed a spectacular Paso Doble earlier in the season. But this time, the six-time DWTS champion will fly solo.

“It’s a solo performance,” Derek told ET. “I am dancing by myself and I am not sure why I decided to, but I am doing it. I have not danced a solo since I was, like, 12 years old, that is the truth. So here we go!”

The Season 29 judge added that he really would have liked to do a group number. But with Coronavirus, that wasn’t really possible. Instead, he will pay homage to some of his heroes in his solo performance.

And Derek Hough won’t be the only special performance during the episode. When he isn’t dancing, Nelly will also perform some of his greatest hits. One thing is certain — it’s going to be a really amazing night and a perfect way to end the season.

Last week, Dancing With The Stars fans said goodbye to Johnny Weir and Britt Stewart, and Skai Jackson and Alan Bersten. They performed well but didn’t quite make the cut for the final four.

During the season finale next week, we can expect to see some freestyle performances from our final four competitors. The final couples are:

Derek Hough’s fellow judges told ET at this point, anyone could realistically win.

Does The Missing Audience Make It Better?

Many fans thought contestants might not do as well without the live audience to cheer them on. But Carrie Ann Inaba says she believes it’s been more intimate this season.

“It feels really special. So, I actually don’t mind not having an audience. I like the intimacy that it has created between us and the competitors. … I think there is a stronger bond now,” she told ET. If you’re viewing at home, you may not have noticed the missing audience at all.

Dancing With The Stars wraps up Season 29 this coming Monday. Tune in to ABC at 8 PM eastern time and see all the action unfold. Who are you cheering for this year? Are you excited to see the amazing Derek Hough perform once again? Let us know in the comments.