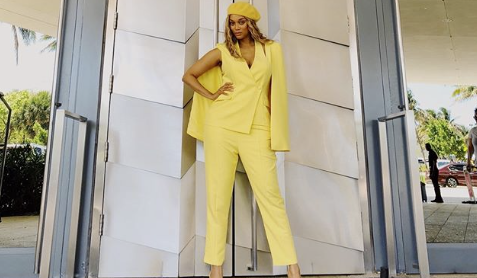 Over the last several years, Dancing With The Stars has seen a wide variety of celebrity competitors. Reality TV stars have long been a staple. But executive producer Tyra Banks wants to put a stop to that — starting with the Real Housewives bunch.

“Tyra is the new boss and made it clear that she didn’t want any more Housewives in her ballroom. She thinks the show needs to aim higher and only book the ladies after everyone else has passed. Several ladies from the Bravo franchise have already made it clear that they would love to put on their dancing shoes, but Tyra doesn’t want any of them right now,” a source told OK!

Tyra Banks Only Wants Celebrity Contestants Who Will Attract Attention

But apparently, it’s not really personal. It’s just business. Many viewers only watch DWTS if they like who’s part of the cast.

“Tyra has never been a fan of the Housewives, but the real reason she doesn’t want them on her show is that Bethenny Frankel, NeNe Leakes, and Teresa Giudice do not make headlines anymore,” the source continues. “Tyra wants reality stars like Carole Baskin from Tiger King — not a decade-old franchise that no one talks about anymore. If Tyra thought for one minute that the Housewives would get her show ratings, she would welcome them to the dance floor in a second.”

Plenty of people did tune in exclusively to see Carole Baskin perform this season. After Tiger King aired on Netflix in March, everyone was curious to see exactly what would happen when she took the stage. She didn’t last long. After three weeks of cat-themed songs, fans had enough and stopped voting for her. The judges didn’t save her the second time she was in the bottom two, either.

It’s understandable that Tyra Banks wants people who will draw attention, but is this the right way to go about things? No one really thought Carole Baskin had a chance of winning the Mirrorball Trophy. Many were actually stunned she made it to week 3. Is it really a good thing if people are only watching to laugh and poke fun at the contestants?

Plenty Of Real Housewives Graced The Stage Before

Dancing With The Stars already featured several Real Housewives stars such as NeNe Leakes, Lisa Rinna, and Lisa Vanderpump. Lisa Rinna even came in 4th place all the way back in Season 2. But unless they can come up with a way to stay at the top of the headlines, Tyra Banks isn’t interested in having them on the show.

Do you agree with Tyra’s choice, or would you actually like to see more of the Real Housewives gang on the show? Let us know what you think. Dancing With The Stars will air a new episode Monday night on ABC. Tune in at 8 PM eastern time to see who will go home next.