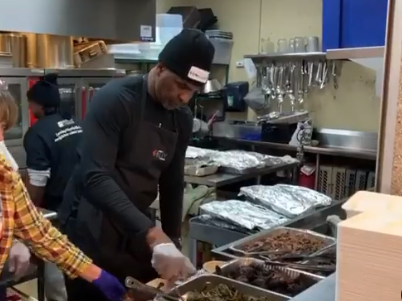 Charles Oakley didn’t spend a ton of time on Dancing With The Stars. In fact, the former NBA star was the first contestant eliminated in week 2. He and his partner Emma Slater tried their best, but Charles just wasn’t cut out for dancing. What he’s really cut out for is cooking.

“So much fun shooting with the amazing @therealoak34 for his cooking show Chopping it UP with Oakley! I’ll send reminders before it airs in the US and more in November on @cookingchannel !! 🥗🍗🍷” Sutton captioned the photo.

We don’t know a whole lot about the show yet, but it’s definitely quite the leap from his basketball career and his latest DWTS appearance. Fans are definitely more likely to tune in if he will be welcoming celebrity guests like Sutton. Appearing as guests on more shows could be exactly what the Housewives need, after all. DWTS executive producer Tyra Banks said she wasn’t interested in having any of the Housewives appear on the show since they don’t make headlines anymore.

Charles Oakley Really Knows His Way Around The Kitchen

If you follow Charles Oakley on Instagram, you can see that he has a passion for cooking. The Charles Oakley Foundation lends a hand to impoverished communities — and that includes cooking and feeding the hungry. Who knew this former NBA star was such a sweet guy?

His Fans Still Cheer Him On

Even though Charles Oakley didn’t go far on Dancing With The Stars, his fans still had his back throughout the competition. Twitter users offered their support for him, even after he and Emma left the competition.

“I really wanted you to be saved! You were so good! Still cheering for you!” wrote one user.

“Oak, you deserved to stay and dance another day! I thought you did an amazing job, and I absolutely appreciate the love and energy you bring to everything you do. Love, a die-hard fan from the ’90s Knicks era.” wrote another.

Being sent home first is always a little uncomfortable. But Charles Oakley handled it well. He’s proud of his performances.

“We wanted to keep going but we had no control of that. I think tonight performing was the best which I did, too,” Oakley told ET after his elimination. “We tried to give them what they wanted but sometimes it happens like that.”

And now that it’s over, it seems he has a bright future in the cooking business. We’ll let you know when his new cooking show airs.

Were you cheering for Charles Oakley on Dancing With The Stars this season? Let us know in the comments. You can also follow him on Instagram to keep up with his latest projects.