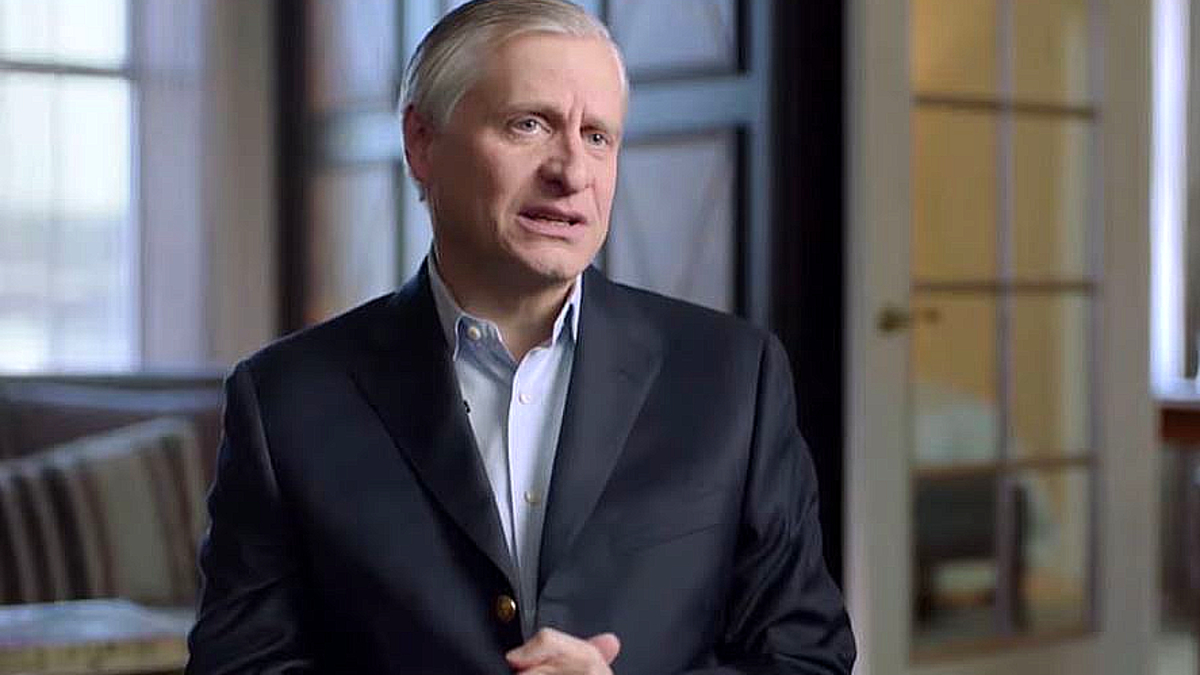 Coming to HBO in October is a powerfully illuminating and entertaining documentary, The Soul of America. The film serves as a history lesson and revelation that sentiment and deeds quite often repeat themselves in the course of history.

Part political documentary, part biography, the film blends archival material and interviews with Meacham along with insights from journalists, academics and civil rights activists. Leading the featured narrative is bestselling author, writer, journalist, historian and prolific presidential biographer Jon Meacham. He says: “Change in America comes when the powerful take notice of the what the people have been saying. It’s on all of us to save the country.”

Addressing an audience, Meacham draws parallels to the notion that history repeats itself.

Noting how President Trump’s controversial edict to “build a wall” is a rerun old news, he says: “We’re living in an era of politics as entertainment. ‘Build the wall!’ We have been here before. A hundred years ago, the governor of Georgia wanted to build a wall of steel to keep immigrants out.”

Meacham notes that what changed everything were the devastating attack and events at Pearl Harbor during the World War II years. He also discusses the current news of today and how it mirrors a more tumultuous decade. He says: “What I see going on today is so reminiscent of what I saw in the sixties.”

About The Soul of America

Based on Meacham’s 2018 bestseller, The Soul of America: The Battle for Our Better Angels and produced by Kunhardt Films (Emmy winner for HBO’s “True Justice: Bryan Stevenson’s Fight for Equality”), this film shows our current political reality by exploring historical events of the past, such as the women’s suffrage movement, the incarceration of Japanese Americans during World War II, McCarthyism and the struggle to pass Civil Rights legislation in the 1960s – all moments when “our better angels” battled against the forces of hatred which appears to be a recurring theme in American life.

The film also reveals background to Meacham’s life and career as a journalist and Pulitzer Prize-winning historian as he shares his insights into America’s past and present.

The producers have several key interviews that underscore the film’s premise, including actor and activist George Takei, whose own personal history was deeply affected after the attack on Pearl Harbor. Takei’s entire family was uprooted and sent away to Japanese concentration camps in the United States.

In the documentary, Takei says: “The internment that Japanese Americans went through is history now. But, what’s happening on our southern borders feels like it is current news.”

Also interviewed are Lisa Tetrault who says: “The women’s movement fought for women to be able to stand up and that’s something we’re still fighting for today. We will not be silenced.”

In TV Shows Ace preview posted below, Meacham notes that fear, anxiety, and violence are inextricably intertwined with the story of the country.

He says: “We could learn a lot by studying the McCarthy era. The late U.S. senator McCarthy believed that even if there’s only one communist member it was one too many.

Of McCarthy’s strategy, Meacham says: “McCarthy understood that headlines spoke louder than details. He would have loved Twitter.”

Also heard from are the late John Lewis, who passed in July of 2020 is interviewed. He says: “When you see something that is not right, you have to do something.”

Details for the HBO airing

HBO’s upcoming timely documentary feature was directed by KD Davison, and features Pulitzer Prize winning journalist and presidential biographer Jon Meacham who offers insight into the United States’ current political and historical moments by examining its past. The documentary is based on Meacham’s book of the same name and will premiere on HBO on October 27th at 9:00pm Eastern.

The film will be available on HBO and to stream on HBO Max.

Focusing on pivotal moments in our history that reflect America’s longstanding struggles with racism, sexism and xenophobia, Meacham demonstrates how we continue to confront animosity in American politics, economic anxiety, isolationist and nativist tendencies and conspiracy theories. Helping us to better understand the parallels between current events and their historical antecedents, THE SOUL OF AMERICA ultimately gives hope that the lessons of the past may bring the nation closer to achieving its democratic ideals.

Nashville resident Jon Meacham is a Pulitzer Prize-winning biographer. His latest work, His Truth Is Marching On: John Lewis and the Power of Hope, was published on August 25, 2020 with Penguin Random House.

His past published works include:  The Hope of Glory: Reflections on the Last Words of Jesus from the Cross; The Soul of America: The Battle for Our Better Angels; Thomas Jefferson: The Art of Power; American Lion: Andrew Jackson in the White House; Franklin and Winston; Destiny and Power: The American Odyssey of George Herbert Walker Bush; and Songs of America: Patriotism, Protest, and the Music That Made a Nation.

The Soul of America, a new documentary based on the best-selling book by Jon Meacham, premieres October 27 at 9P on HBO Max. #HBO #HBODocs