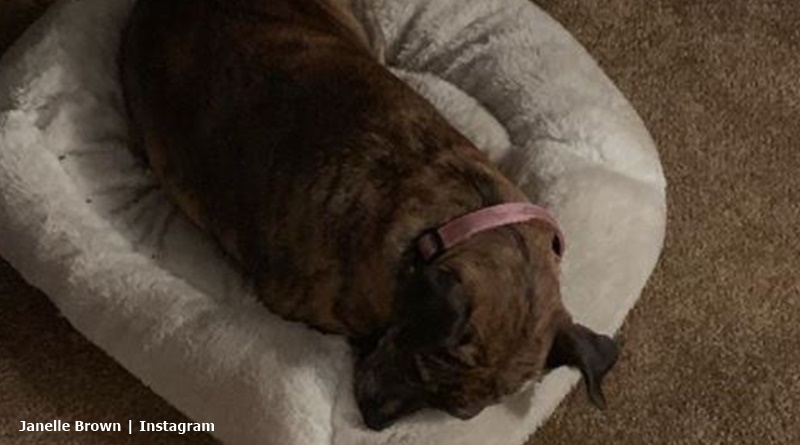 Sister Wives fans know that Janelle bonded with her dog Bryn. And, the pup obviously bonded right back as it won’t let her out of his sight. If she goes away, Bryn gives her the beady eye when she returns. But now, she seems a little bit anxious about her dog.

We reported that last year, “Janelle got in a rescue dog for her son Gabe.” Gabe hated the idea of the move to Flagstaff and seemed very down. So, Janelle thought a new dog might cheer him up. Named Obi, the pup settled in and made a friend of Bryn. And, looking at the dog and Gabe today, it probably worked. At the time, InTouchWeekly suggested that Bryn might be about two years old. So, Obi seemed like the first puppy in the family.

With Obi and Gabe forming a close bond, Bryn still remains very close to the heart of the Sister Wives star. But, Janelle said on Instagram that sometimes Obi gets a bit too much for the older dog. On a post she shared on September 3, she said  “Our Bryn (brindle chiweenie) spends most days just tolerating our Obi (black lab/shepherd) puppy.” Obi’s full of energy at one-and-a-half years old. But, Bryn might slow down a bit these days.

Our Bryn (brindle chiweenie) spends most days just tolerating our Obi (black lab/shepherd) puppy. He is 1.5 years old and as energetic and as goofy as can be – but sometimes- there is a moment of peace. P.S – I have no idea how they fit on this big cushion together !

Janelle took to her Instagram on October 11. She shared a photo of her dog Bryn. Apparently, Garrison took some photos. The TLC star captioned the photo with “He caught this priceless one of my old girl Bryn. It makes me sad to see the gray creeping in on her little face. She was a rescue so best estimates put her at 7 or 8 years old. I hope we have many more years with her. ”

Well, assuming that Bryn lives a reasonably normal lifestyle, she could last a few more years yet. According to  dogs.lovetoknow.com, Chiweenies normally live about “10 years at a minimum.” However, if the dog remains healthy with the right diet and exercise, they could live up to “12 to 15 years with optimum care.” Hopefully, Bryn remains in the lives of the Sister Wives family for many more years.

@robertthebrown was working on photos of a different kind yesterday. He caught this priceless one of my old girl Bryn. It makes me sad to see the gray creeping in on her little face. She was a rescue so best estimates put her at 7 or 8 years old. I hope we have many more years with her. #dogs #rescue #cutiepie #puppylove

Plenty of animal lovers follow the TLC star, and they commented about Bryn and their own pets. One fan pointed out, “Age sneaks up on all of us, I bet she still believes she’s a pup still though.” Then, another one wrote, “Blessings, so very hard to see them age, but would be even harder to have known they never knew true love.”

Sister Wives fans know that dogs become part of the family. When they pass on, heartbreak remains for their “parents.” But, like every living thing, inevitably, a parting of the ways comes along. In the meantime, at least Bryn knows a loving home.