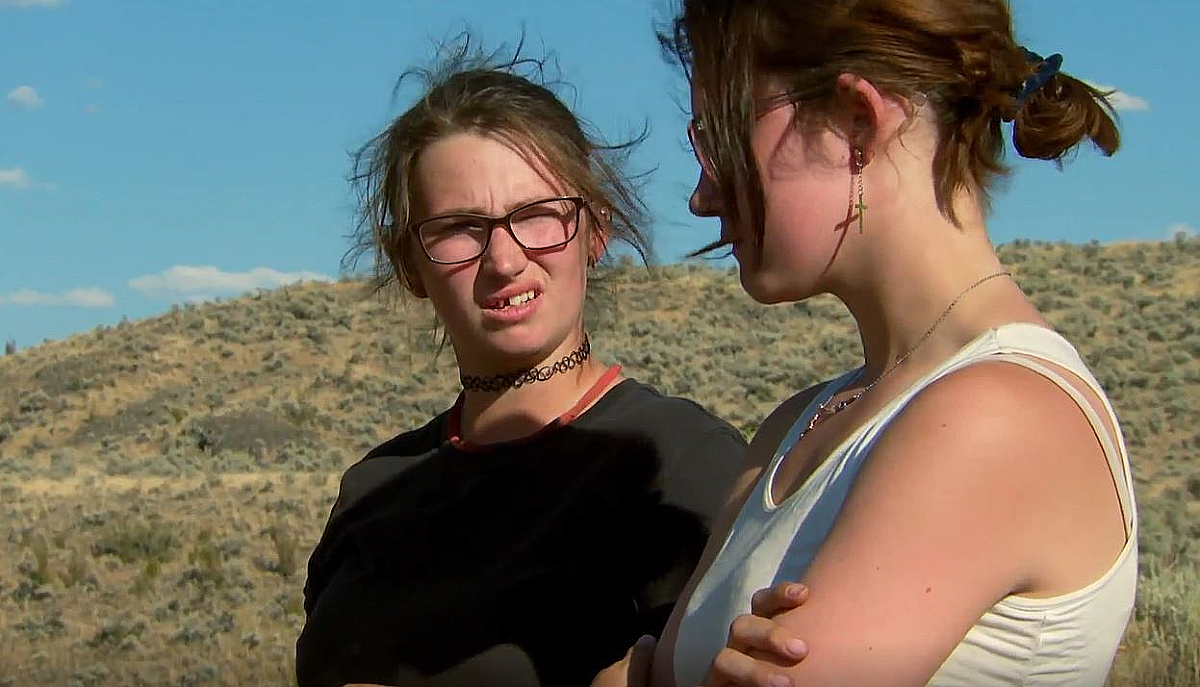 Discovery Channel is down to the wire for this 2020 season of Alaskan Bush People. They turned in the episode “The Land Giveths and Takeths” on October 4. It was jam packed with drama.

But when man makes plans… God laughs, as they say.

After the brothers try to work together despite Gabe’s best efforts to fall through floor joists not nailed down when production is suddenly halted for COVID.

And then a massive wildfire strikes Washington State and their Palmer Mountain.

Alaskan Bush People has one more episode this season

Prior to the fire drama, the family hunkered down as Billy told them about the virus.  Add to that, nature woes as the snow and ice have put a huge wrench in the flow of the construction, thanks to the snowmelt and all the water and mud.

Even the girls, Rain and Birdy, pitch in to carry huge trusses from point A to point B.

Father Billy and Mother Ami seem frailer this episode, and in TV Shows Ace exclusive interview with Birdy and Rain, we learn that the two are doing okay.

There’s a lot going in with the Browns, as Bear has reconciled with Raiven and is back with his son River despite some high drama there for awhile. Bam Bam is still dating someone and Noah and Gabe are married men each with a baby of his own.

We caught up with Rain and Birdy yesterday and got the Brown family scoop ahead of the finale this weekend.

The fires are real, it’s scary. Can you talk about that scene when you were in the car fleeing the area?

Rain Brown: It definitely was nerve wracking to be driving down a burning mountain. It’s not something that I’ve ever done before. I definitely would say it was probably one of the scariest things I’ve ever had to do, with that being said, I, I’m proud of everyone that pulled together and handled it the way that we did

Bird Brown: It was definitely, I would say it was a scary situation, you know, a, one of the most really been in, because it all happened so fast, I feel like is the main thing. And it was hard not to cry. I’m ashamed of myself that I did, but not situation… It was just scary, you know?

So she knowing you had, like, we had to let the animals out and that was a big thing and everyone was just everywhere. So it was just definitely a scary situation to be in.

Yet you kept your sense of humor and said, ‘I forgot my frog and my gun…’.

Bird Brown: I was trying, Yes. I was very attached to that gun and that frog.

So give me the straight story, because there’s all these different conflicting news stories and Bear posting on Instagram. The building that we’re watching this big home that you guys are building together, did that burn?

Rain Brown: I’m not sure that we can give out that information. I’m sorry.

Bird Brown: Uh, we definitely did lose a lot. Yes, just which buildings… there’s a lot that we lost, very little that we actually still have.

Rain Brown: I just don’t want to give anything away for the new season, but, we did lose some property, but not all hope is lost.

Now are all your animals okay?

Of all of the siblings, your brothers have a lot of outside interests and you’ve got two nephews and one niece, correct?

I know your oldest brother Matt is not part of the show anymore and he’s in California, but it seems like you two are the ones that are going to carry the lifestyle and the legacy that your parents have put forth more than all of them am. Am I correct or incorrect?

I know you have a residence in California, do you have favorite things that you like to do? Or can you just not wait to get out of California?

Rain Brown: So we only go to California just for check up visits, every once in a while. And so it’s more of a road trip, less of a residency. And so with that said it’s had just like we do road trip activities.

Bird Brown: Well, like when mom was going through chemo and we like had a house there. I definitely couldn’t wait to get out of LA. There are like cool things to do, but it’s just not my scene.

And since mom has been through with the chemo, we’ve done a trip there, because she has to get her daily checkups. I liked LA it’s just not my cup of tea

Rain Brown: It’s just nice for what it is, I think.

Speaking of your mom and your dad, there’s a lot of chatter about their health. Can you give us an update first on your mother?

Rain Brown: And dad was the same way. You know, it’s just the air quality can mess with him sometimes, but we’re all taking good care of him and they’re, they’re doing pretty good. They’re in good health.

What is the game plan going forward as you film this with COVID?

Bird Brown: Well going forward with the filming and COVID and everything, it’s just taking all the precautions, checking temperatures, quarantines, just making sure that mom and dad are safe from it is the top priority.

Rain Brown: Just keeping going and following all the regulations and the rules and keeping up to date on all the updates about it. we check our temperatures, we wear masks, we do the whole nine yards…just making sure that it’s safe, but continuing to do what we like to do.

Have you had any encounters with people looking for you or trying to make a connection with you or any like weird stalker moments?

Rain Brown: We’ve definitely had our share. That is for sure. It’s pretty crazy, but most everyone is polite and they just come up and say: ‘We wanted to say hi’ or they’ll give us crates of apples or bake cookies for us.

And so it’s really nice and it’s sweet to see that people care about it that much. And even after the fire, we had people sending us clothes and all this and that, and just the support around this kind of community is really nice.

Rain, what do you think your superpower is, or your most valuable asset to the whole Brown family?

Rain Brown: Oh gosh. I would say it would be my advice. Everyone comes to me when they need advice for things and so I try and have a really listening ear. I would say my advice.

Bird, how about you?

Bird Brown: I like to see him as much as I can.

Rain Brown: I’m the same way. Any chance I get to see my nieces or nephews, I’m there.

You guys appear to be very close just based on the posts that you have on social media. Who would you say is closest to you? Each one of you?

Rain Brown: I would definitely say it would be a toss up in between Gabe or Bear. Because we’ve always had a very close dynamic. I’m pretty close with all my brothers, but Gabe, Bear and I tend to kind of fall into teams out there more often.

What is the worst thing about being famous for just living your life and being on TV. What’s the hardest thing for you to process?

Bird Brown: I would say for me, it’s the aspect that I couldn’t just disappear into the woods anymore. That everyone knows who I am now…that I couldn’t go to a new town and people not necessarily know me.

I think that’s the hardest because like notoriety we have, you can’t just get rid of, and I feel like for me, that would definitely be the worst part about it.

And sometimes it is because I don’t want to hurt anybody’s feelings. I know how cool it must be for those people, because even though I don’t look at my family and I like we are famous, I know some other people do.

So I just try and respect that as much as I can. And it’s kind of hard when it gets to be more than one person coming up and you’re trying to pay attention to every one of the people in it. It gets a little complicated sometimes

Bird Brown: I would definitely say one would be hunting, fishing and just things like that. Just things that you don’t have to rely on anyone for, or be around anyone.

Rain Brown: I would say the three basics, we always talk about our wood, water and meat, and we have those three things. You’re fine.

You need to know how to hunt your own food, get your own water and make your own fire. And if you have that, you’re pretty much set and a good head on your shoulders, a good way of communicating.

Now, which one of you is the ace gardener?

Rain Brown: Between the two of us, I do better with flowers and bird does better with vegetables. Good way of putting it. We each just have our own critique.

Do you have anyone special in your lives? Your brothers have girlfriends and wives and babies and what’s going on with you two?. Do you have any loves of your life or anyone you care to mention?

Rain Brown: Same here, just enjoying my youth and enjoying being free and doing whatever I went.

Interesting, Rain, you’re the youngest. And yet you come across to viewers and fans as one of the wiser ones in the bunch. How do you feel about that?

Rain Brown: Ah, It’s true! [laughs] I just think that I’m observant to things and I have always thought a little bit differently than most people. And, I’ve never been young. I’ve always felt like I was 35, even now.

And so I’ve always just felt the same age… and I guess that comes across as wise.

Bird Brown: One thing would be that like growing up, our parents always treated us all equally despite gender or age.

Give us a tease for this finale episode, what can fans, look forward to? What kind of a nugget can you give us?.

Rain Brown: I would just say, strength, family, we pull together and we continue to do what we love to do and what we always will do. So yes, just more of the same in a way.

Yes, it is definitely going to be the hardest year, but hopefully fulfilling in the end,.

Bird Brown: I would agree with what she said. There’s a lot of hope. A lot of tragedy, but within the tragedy,…you know…hope. I think that’s the main thing.