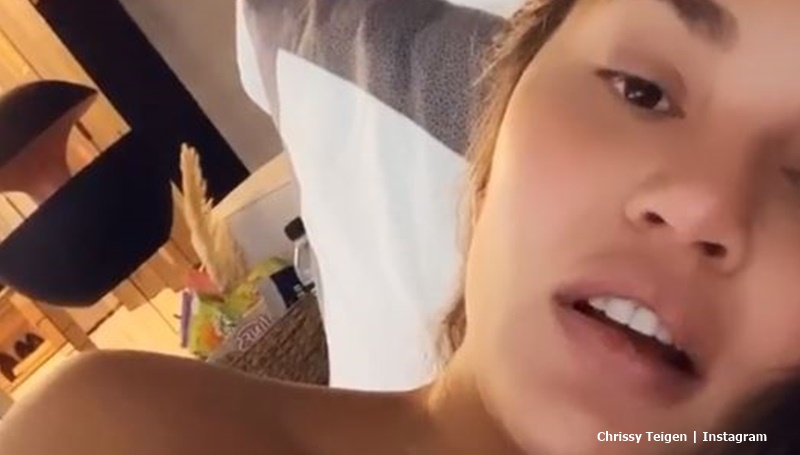 Chrissy Teigen fans heard in mid-August that she and John Legend expect a third child. The news came via a music video for his song Wild. On her Instagram, Chrissy revealed that she goes through a bit of a torrid time with this pregnancy. But, she also inadvertently revealed the gender of their new baby,

Chrissy Teigen shares the gender of her new baby

Fans of John Legend and Chrissy know that they already have two kids, Luna, 4, and Miles, 2. We reported that she already talked about a third child back when she expected Miles. So, that came about. But this time, she feels a bit weak and unwell. Over on Instagramn, she shared  a video that revealed her lying down bed. She captioned it with, “explaining what’s going on with my poopy placenta on my stories if you’re interested. Apologies for all the missed commitments in the next few weeks.”

In the video on September 17, Chrissy Teigen said about her placenta, “It’s super weak.” Then she noted, “it’s really, really weird because the baby’s really healthy.” Then she added, “He’s big!” Next, she clapped her hand over her mouth. So, fans knew she just made a deliberate inadvertent baby gender reveal. One follower wrote, “This reveal is very on brand and didn’t start any wildfires! 💛”

People also saw the video by Chrissy. They reported that Chrissy explained more about her problems that require her bed rest. She said, “My placenta sucks.” But it’s not the first time these complications rose. Chrissy went through similar issues with Luna and Miles. She noted that “With Miles, it just stopped feeding him. It stopped taking care of him. I was stealing all his food because I was getting huge but he wasn’t getting big at all, so he had to come out early and Luna had to come out early. I was induced both times.”

explaining what’s going on with my poopy placenta on my stories if you’re interested. Apologies for all the missed commitments in the next few weeks. 💙

The main thing is that Chrissy’s under the care of doctors, and her baby boy seems very healthy. So that’s good news and hopefully she doesn’t get any worse. The outlet also noted that quite a lot of people rather enjoyed Chrissy’s accidentally-on-purpose baby reveal. And lots of people wished her well for the rest of her pregnancy.

What did you think of the gender reveal by Chrissy Teigen? Sound off in the comments below.