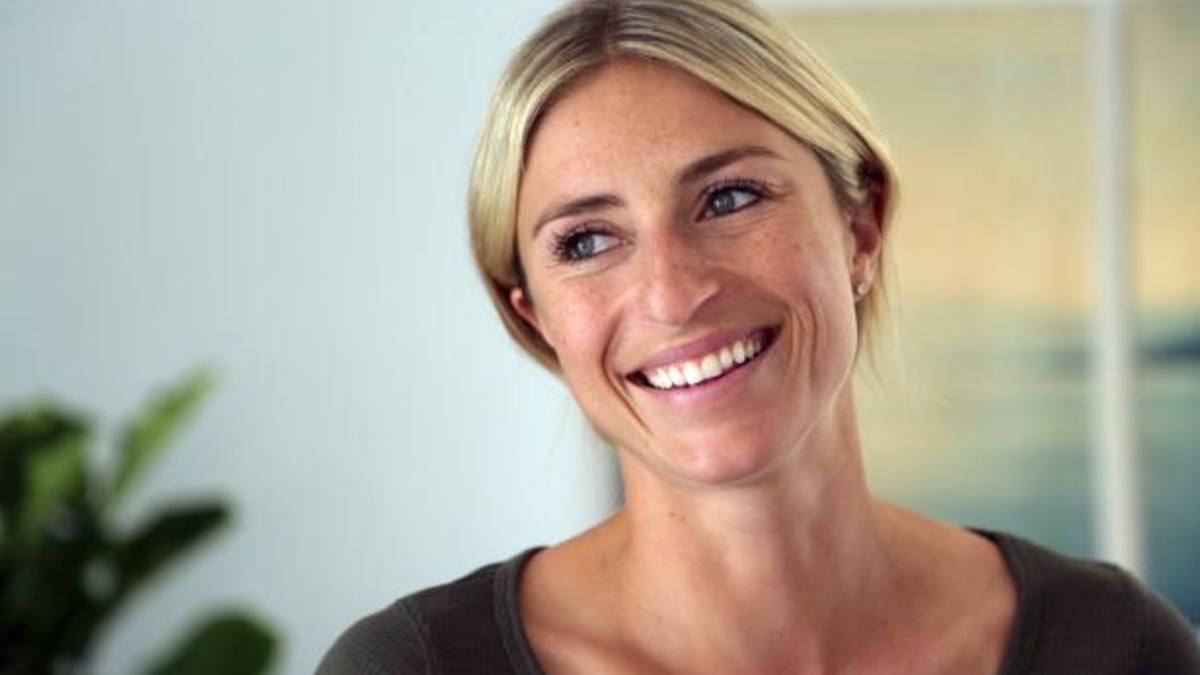 We have all been there. Guilty as charged, trying to emulate all the do-it-yourself home reno stars’ flips and fixes, only to find out we are in over our heads.

Enter HGTV star Jasmine Roth, the savvy designer and construction guru who knows her way around a blueprint and a floorplan.

This Saturday Roth will return in a new series titled, Help! I Wrecked My House, where she and her crack construction team will help various homeowners from their DIY disasters they have found themselves suddenly neck deep in the bad stuff.

Not only will they bring success to these failed reno projects, but provide clients a job with pitch perfect design and style.

Fans of Roth know her style, from her work on Rock The Block and Hidden Potential. But this new series takes a different approach to home repair and reno as the remodel has happened…but it is a total wipeout for the homeowner who was trying to save a buck.

Now, the damage is so bad that they need a professional to, put it mildly, unf**k their house.

Roth is a pragmatic designer with a function and design-forward ethos.  She and her husband are intrepid travelers who have recently welcomed a new baby girl into their lives. Now Jasmine uses the influences from her worldly travels and will incorporate various clever approaches to storage issues and overall renovation.

In a previously released press release, Jasmine said: “Families everywhere are renovating their homes themselves right now. When they’ve taken on more than they bargained for, that’s when they call me. I can rescue them from their renovation disasters and help give them their dream home.”

What happens in the series?

In the series premiere Jasmine helps a young family who tries to tackle their own major home reno—until they realize they are in over their heads. Desperate for assistance, they hope Jasmine can turn their half-finished bathroom, kitchen, and backyard into spaces where they can finally relax and connect as a family.

Are you doing two shows? Hidden Potential along with this new one for HGTV?

Jasmine Roth: Well, we haven’t filmed the new season of Hidden Potential. We kind of put it on the back burner while I was pregnant, and I filmed this show. I think we’re just going to see how everything plays out. I don’t really know. All of us have a lot up in the air right now.

Where did the premise for Help? I Wrecked my House come from?

Jasmine Roth: Oh, yes, good question. I mean, over the years I’ve helped so many different families, and people have come to me with all different problems, but something that I kept seeing over and over and like this recurring theme with people asking me to literally help them because they wrecked their house.

And so, either by watching HGTV or they watch a YouTube video or they just, I don’t know, thought that they could do more than they could. Getting a bit too ambitious and started ripping their house apart or trying to do something themselves. And it just didn’t work out.

So HGTV was like, this seems like something that a lot of people find themselves in this position.  If you can help these families and we can make a show out of it. The network and I thought a lot of people would really find this interesting.

And that is kind of where the idea came from, and sure enough, I mean, even the casting, finding the families for these six episodes was it took a day.
There’s so many people that are unfortunately in this situation, where they’ve just taken way more on than they should have.

The episode that I got to watch, the couple’s plumber. I don’t know what he did to their plumbing, but it was like emptying in their roster after something or under their foundation. It was crazy,

Jasmine Roth: Right? And it was a total mess. So yeah, that family, they live right up the street from me where I live here in Southern California. And it was so interesting because they actually did do a lot of things themselves. They built their own kitchen and they put their own kitchen cabinets together.They they had a baby, and they just couldn’t finish anything.

Then they said, okay lets hire a plumber, not a license plumber and pulling the permits but they found some guy that was like, ‘Oh, you don’t need it. Don’t worry about all that. I’ll do it for less money, and I’ll get it done quick’ or whatever.

Well, it turns out that everything he did was completely wrong. And it was a really…it was tough. I mean, the fact that this couple called me in the first place means that they were pretty desperate, right?

They didn’t know what to do next. And then for me to have to call them and be like, ‘Hey, by the way, like all the money you’ve already spent, the money saved now has to go to this because this is all done wrong. The bathroom that you thought was finished I now have to rip out. And the bathroom that you thought was like almost finished is not even started.’ It was a really, really tough call to have to make to them.

Good news is, there is a happy ending, right? Right.

But it was it was a happy ending, but it was tough, you know? It’s it’s really they they learned the hard way. So hopefully, like, this show will bring that to light a little bit, where it’s like, there are certain corners that you just can’t cut or it’s going to bite you.

We we get all hyped up, you guys make it look so effortless, and it’s just not. And of course, you mentioned in that episode, doing your own electrical work and plumbing is not wise. What are the things that people can handle pretty well on their own?

Jasmine Roth: I mean, there’s definitely there’s so many things. Let’s be honest that you can do to your own house that isn’t going to make your home any second, make it dangerous. You’re not going to ruin the resale value. And you can actually get a lot done.

Easy things, paint right? I mean, that is something that if you have the time, go for it and it makes a huge difference. The other thing I always say is landscaping. That can be tough here in Southern California duration, so that would be the one thing I say to hire professional form. But other than that, I mean, if you have like, if you want to go outside and you want to spend everything one of your weekends out digging holes and putting plants in the ground and you know, doing all of that, you can do your own landscaping, You can make your house look really nice.

I would say paint number one, landscaping number two.

If someone has an older kitchen and an older bath, but it’s not horrible, it’s just dated. But their landscaping and on point and the curb appeal on point, and the location is on point. Isn’t that kind of-in certain real estate markets- make up for the sins of a dated kitchen and baths?

Jasmine Roth: Oh, for sure, I see it all the time. Where people—whether it’s new construction or renovation—people redo the kitchen and the bathrooms put new flooring in. They paint the interior walls. And so when you walk in the front door like, ‘Oh, this is really nice.’

I’m a huge proponent of landscaping, but you don’t see landscaping as much on Help! I Wrecked My House because most of our focused on was just fixing what had, you know, had been broken basically. Um, but, you know, if you watched any of my in a potential shows I mean, landscaping is something I’m really passionate about.

You grew up back east?

Jasmine Roth: I grew up in Virginia and I moved to California after I went to college in Boston and I met at the time. My college roommate who was from Southern California. And he is still my roommate (laughs). And then after we graduated, I moved back here. And then the cool thing is, my entire immediate family followed me here. I live in California now.

What are some of the classic wonderful and and cost effective ways to really to really do a small bathroom for finishes and for materials? What do you love?

Jasmine Roth: Oh, my goodness. I could talk about this all day, just so you know. I think some of the trends that I’ll steer people away from… this is going to sound so silly. But don’t do anything trendy. I know that seems like a no brainer, but just because it’s something that you like right now, I always tell my clients ‘Okay, look at this material. And do you think you’re going to like it in 10 years because that’s how long the bathroom lives. It is for 10 to 15 to 20 years. And if you look at the materials and think about in 10 years I’m going to probably be sick of this. Don’t put it in!

And then get that trendy geometric pattern that you like right now in your towels… or getting in a wallpaper or your bath mat, something that’s easy to change out, that when you do become sick of it you don’t regret that you installed tile on an entire wall that you’re never you’re not going to rip out your whole shower.

That’s what I tell my clients. Keep it simple. Keep it timeless. There are different levels, right?

So then, not everybody can necessarily afford marble so what I recommend is figuring out your budget is and then what you want the look to be. And you can replicate that look without necessarily using that exact material, so swap the marble and go to a local tile showroom or hardware store, and you find a porcelain tile that’s been printed to look like marble, and it will cost less to install.

The material cost less, and it actually will age better and be more durable. So you still got that look and you get that bump as far as resale value.

Your other HGTV peers, who do you like to watch?

Jasmine Roth: Okay, so just full disclaimer. I was a huge HGTV fan way before I ever had anything to do with HGTV. I was a super fan. I’ve grown up watching HGTV. Jonathan and Drew Scott are my favorite. I actually was judged on their new season of Brother Versus Brother, which is so fun, they compete, and I have to be a judge and pick the winter.

That episode with me airs September 30th. I love working with them. I worked with them on A Very Brady Renovation,
I love seeing all of the HGTV TV hosts, I always use hashtag my HGTV family because it’s the only family, after doing Rock the Block and the Brady Renovation and then being able to just meet the different host.

I’ve never actually worked with standing there and this year, but I’ve met them. I love Leanne and their Hometown series, Good Bones star Mina, she’s pregnant. She’s about to pop right now. But I keep up with everybody. I know Windy City star Alison.

All of us…our new seasons begin in September, and I can’t wait to watch. I do keep up with everybody.

The new episodes of Help! I Wrecked My House will be available the same day as the TV premieres on HGTV GO each Saturday starting Sept. 12.