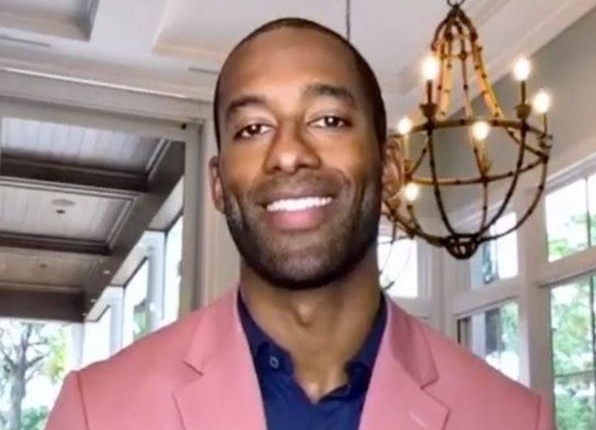 There is finally news surfacing about Matt James getting to work filming The Bachelor. Fans have anxiously been awaiting news that their favorite reality franchise is getting back to business. Until now the location had been up in the air. Now, Reality Steve is dishing on where the season will film. And, he also knows a bit more about when Matt will be meeting his lucky ladies.

So, it looks like The Bachelor is leaving California for the time being. The Bachelorette filmed near Palm Springs exclusively at a resort. Now, Matt and his ladies will be headed to Pennsylvania to another resort. Reality Steve went to Twitter to share the news.

Matt’s season will film exclusively at the resort, just as The Bachelorette is doing. This is to keep all the crew and cast safe as the coronavirus pandemic is still an issue. Of course, they will all be quarantined and tested before filming will begin.

Matt will be filming The Bachelor at Nemacolin Woodlands Resort in Pennsylvania. And, according to Steve, the franchise has used this resort before. He shared this resort was where Bachelorette JoJo Fletcher filmed episode 4 of her season. In fact, it was the episode where Chad Johnson was eliminated on his 2-on-1 date.

Steve also tweeted, “A couple sources told me about Nemacolin last week, and was finally able to confirm it this morning. Didn’t even think to look at the availability on their website. Hmmmm…closed mid Sept through Thanksgiving – exact dates the “Bachelor” has filmed the last 12 years…”

And, Matt will be meeting his ladies at the end of September if all goes according to plan.

Somehow the Chateau turns every moment into a postcard. Wish you were here! 📷: @huntervought

The Nemacolin Woodlands Resort is located in Farmington, Pennsylvania and looks breathtaking. Of course, The Bachelor production crews would not settle for anything less than perfect when selecting a location. The resort offers exquisite dining, privacy, swimming, golf and so much more.

No doubt the cast will be spoiled and pampered at this magnificent resort. Looking at the photos reveals a lot of room to explore and places for Matt to get cozy with his favorite women. It looks like a beautiful place to fall in love.

And, should he meet the woman of his dreams, they do weddings!

Matt is going to make an amazing Bachelor lead. He is excited for the world to see how beautiful diverse relationships can be. He said, “It’s an honor. I’m just going to lean into myself and how my mom raised me, and hopefully when people invite me into their homes on Monday night… they see that diverse love stories are beautiful.”

And, remember, Matt was originally cast for Clare Crawley’s Season of The Bachelorette. They seemed to have some drama brewing before they ever met. Then, it became something that didn’t even matter when he was named The Bachelor.

Also, Matt’s best friend is Tyler Cameron. The two live together in New York and have spent quarantine together in Florida. Plus, he is very close to his mother and that is heartwarming. Matt is genuine and ready to find love.

Fans are definitely excited to see him on their television screens in January. Stay tuned.