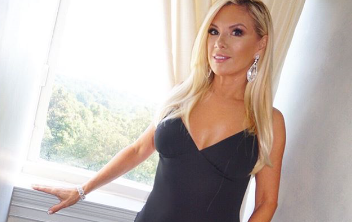 In the newest episode of Real Housewives of New York, alcohol and choice words flew. RHONY star Ramona Singer told Dorinda Medley and Sonja Morgan exactly what she thought about their drinking. On the previous episode, Leah McSweeney Singer upset her by walking away. The girls were on a trip to Cancun together, so vacation drinking was happening.

Dorinda put Sonja to bed and came to check on Ramona asking if she was okay. Ramona asked if Dorinda was okay because she heard her screaming at everyone. Dorinda said, “Sonja is a mess. I don’t like when she comes to dinner a mess. I put her to bed.” Ramona responded saying Dorinda had been a mess like that before. Dorinda said she hadn’t and fired back, “You’ve been a mess before and I’ve helped you. I’ve never called you out on it.”

Ramona Singer Wasn’t Impressed By The Drinking And Fighting

Ramona Singer told Dorinda point-blank, “I can’t be around you girls anymore. It’s crazy. You guys are crazy. Drink some water.” In a confessional, she said Dorinda will deflect when she doesn’t like what you’re saying. She told Dorinda that both she and Sonja needed to go to AA according to People.

Luann de Lesseps went for a walk with Ramona Singer to try and defuse the situation. Ramona told her she was drinking water because she didn’t want to end up like some of the other girls. LuAnn said Dorinda told her Singer suggested she go to AA. Singer said she thought she should and LuAnn said she shouldn’t attack her for drinking.

It’s a new great episode tonight #rhony with @dorindamedley @leahmob @countessluann @sonjatmorgan !!!! We girls do know how to have a great time !?!? !

Ramona Didn’t Back Down On How She Felt

LuAnn went back to Dorinda and told her that Ramona judged her for her drinking. Dorinda responded, “Judging me for me drinking. You went to jail for your drinking.” Shots fired! LuAnn wasn’t impressed and in the morning, she confronted Dorinda. She said she wasn’t sure if Dorinda remembered everything.

Dorinda said, “stop that. I had three wine spritzers. Yes, I remember everything that happened.” She went on to say that if LuAnn didn’t bring up her drinking she wouldn’t bring up hers and LuAnn agreed to that arrangement.

The drinking and fighting about drinking don’t stop as a preview for next week showed. The ladies continue their Cancun trip next Thursday on Bravo.