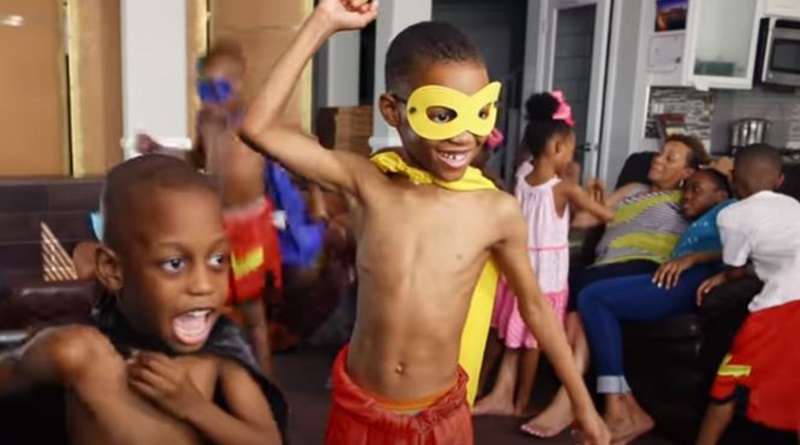 Doubling Down with the Derricos brings another massive family show on TLC. Many fans already tune in and watch the large Duggar family on Counting On. Plus, they enjoyed Welcome to Plathville with Kim and Barry and their many kids. Fans also see the 7 Little Johnstons. But, much like the Duggar’s ever-expanding family, the new show brings so many family members, that figuring out who’s who might take a bit of time. So, here’s our easy-to-refer-to guide.

The new show premiers on August 11, at 10 PM ET. The storyline for the first season starts when mom Karen goes off to the hospital for confinement. She’s pregnant with the triplets, (One set of many multiples.) Their eldest daughter will help out Deon, the dad of all the kids with her younger siblings. Most likely, granny and Deon’s nephew also help out. And, judging by the trailer, their hands seems pretty full of active kids.

Unlike the OutDaughtered family, this show brings no special fertility babies. All of them got conceived naturally. Karen, a devoted mom who loves kids also advocates for breastfeeding. Apparently, multiple kids run in the family. According to InTouch Weekly, “the big family of 14 kids lives in Las Vegas, Nevada, though Karen is originally from Kingstree, South Carolina, and Deon’s IMDb bio says he’s from Detroit, Michigan.” Fans may also see something of a suspected vacation home in Myrtle Beach, SC. And, here’s how to keep track of everyone.

Deon and Karen birthed and raised all the kids. Deon and the family live in a decent home and he deals in real estate. His wife, Karen, obviously births and raises the kids with a lot of help. The help comes from Deon’s nephew Eric Jefferson and his wife Mami Fefe. On his Instagram, Deon refers to Eric as another “son.” Then, there’s also Deon’s mom, Marian Derrico. Grandma Derrico, wise in the ways of kids helped them navigate the day to day chaos of so many kids in the home.

To summarise the overseers of all these kids in Doubling Down with the Derricos:

The kids in the Derrico family

Darian Derrico, the eldest child also helps with her younger siblings. When the show starts ahead of the birth of the triplets, she’s 14 years old. Her brother, Derrick, described as the tidy one, comes next. He got followed by the twins Denver and Dallas. Now, fans meet the next bunch of kids. Like the Busby’s from OutDaughtered, the Derrico family also produced quintuplets. The quints’ are named “Deniko, Dariz, Deonee, Daician, and Daiten.”

Next up, came Diez and Dior. The two kids were triplets, but one child, Carter passed away soon after childbirth. The newest triplets are  Dawsyn, De’Aren, and Dyver. So, to summarise the Doubling Down with the Derricos kids, here’s your quick glance:

You still a have few weeks left before the show airs. So, now might be a good time to learn those names. Once the show starts, the trailer indicates it gets pretty fast-paced with all those super-active kids in the home.