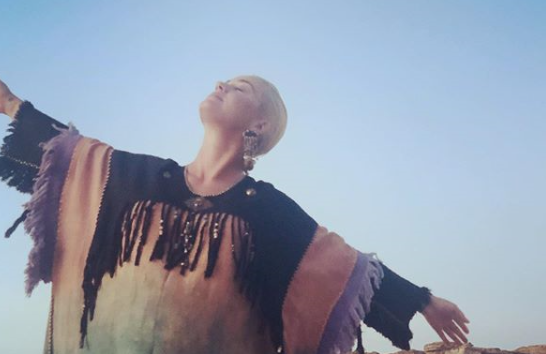 Katy Perry is very close to giving birth to her first child, a baby girl, with Orlando Bloom. She went on Howard Stern and talked about the conflict she had with Taylor Swift. The two engaged in a public feud for a while. Now they seem to be back on good terms. She said she wanted to set an example for young girls. Fans knew the feud was over when Katy showed up in Taylor’s music video for, You Need to Calm Down.

As for why the two had a disagreement in the first place, it remains unclear. Katy said according to Yahoo News she felt like the media blew it out of proportion. Katy also mentioned women in her industry are often pitted against each other. This doesn’t happen to men as much. She said, “you never see, like, articles about Ed Sheeran and Justin Bieber in a fight.” Katy said it will take audiences, media, and artists actively shifting their consciousness.

Never too pregnant for a crop 💁🏼‍♀️ and never too good for a mask 😷 Get ur #SMILE game on (tho don’t forget darling #Daisies🌼) and head to the link in my bio for your merch bundles! 😁

Why Did Katy Perry Squash The Beef With Taylor Swift?

Katy Perry said she felt like the conflict wasn’t as important as the example they needed to set for young women according to ET Online. She said, “what I’m so grateful for is that we did get to make up and we made up publicly to be an example of redemption”

She said, “gossip and lies, they take the elevator. But truth takes the stairs. Time will tell my story.” She said this when explaining why the feud lasted as long as it did. Perry said they now talk about the best they want for each other. Katy Perry is about to have a baby girl, so it just reinforces her desire to be a good role model.

Perry Has A Very Supportive Partner

While writing her new album, Katy Perry revealed she suffered depression. She stated that she was, “so ashamed about being on medication because I was like… ‘I wrote ‘Firework.’ But it was one of those things where I’d sprained my brain a little bit.”

She said Orlando Bloom has been there for her through it all. She said she got to the point of contemplating suicide. Bloom went with her to the Hoffman Institute where she stayed for a week.

Katy said, Orlando has understood her moods. She said, “he’s the only one that could handle it and that’s why we’re in this position. I showed him all of it. And I still test him and he still shows up. That’s why he is perfect for me — because I’m a lot!” Fans look forward to seeing the two welcome their new addition and to the release of Smile which comes out on August 14th.