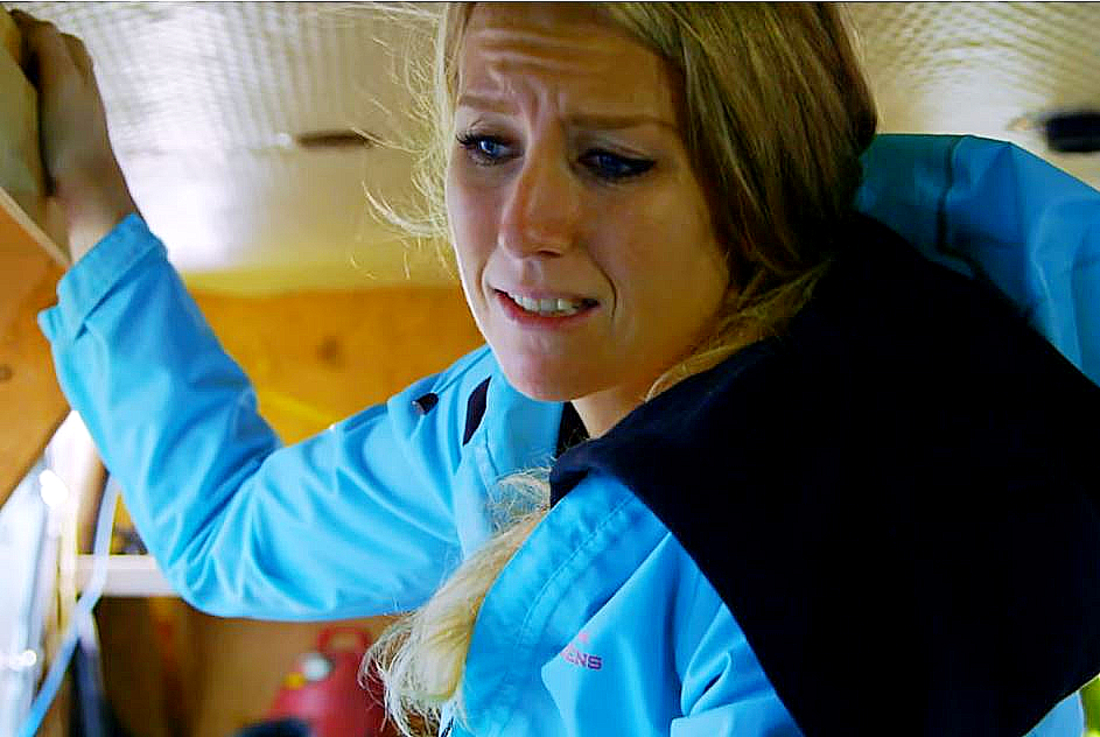 On tonight’s Bering Sea Gold, the father-daughter threads continue as Wild Ranger Gold Co. Captain Vernon Adkison has turned over his boat and dredge to daughter Elaine, and she’s on high alert.

In TV Shows Ace exclusive clip below, we see diver Gary is working down below as they are parked right in the crosshairs of a huge storm blowing in, and the whitecaps are already forming.

Suddenly, gold is discovered, what to do?

The mercurial weather patterns that his Nome, Alaska in the Springtime are always a concern.

Watching her underwater monitors, Elaine is obviously worried about her man below and she says: “We are giving it one last shot, we’ve got a really small window here.”

Happily onto a lead and about to make a huge discovery, Gary is not phased by the coming weather and he feels he is suited up and can handle a little rough chop.

Father Vernon adds that this is one of the toughest decisions when running a gold operation out at sea. Pulling the trigger to make an executive call and end the gold hunt, or sticking it out based on promising leads. Being in charge is a tough deal.

Observant to the increasingly blustery conditions, Elaine says: “I really am going to have to pull you up in a few minutes, man, it’s starting to Whitecap…No Gary I really have to get you up it’s beginning to pick up.”

Our esteemed narrator Mike Rowe adds more drama to the scene: “Despite anchoring the team on a rich pay streak, but rookie captain has to decide when to pack it in.”

In a separate offsite interview, father Vernon says: “I mean, you [are] always taking chances and it’s all dangerous and see or get off the pot decisions are the toughest call for the captain to make, but I’m gonna keep my mouth shut. Elaine is gonna have to do this one on her own.”

Watching the monitors still, Elaine gives Gary a bit of time against her instincts.

She says: “Okay you can have five minutes but you guys come up after that okay? We really need to wrap this thing up.”

This is when Gary cries out the word everyone wants to hear: “Gold”, as he has found a sizable nugget in the murky water and he is now stoked to keep looking. But Elaine—though elated at the discovery—is tasked with keeping Gary safe and live to hunt for gold another day.

She tells him to tuck that nugget in his glove and get ready to surface.

Fans have loved the straight shooter Vernon “Vern” Adkison since season one. Vern is a former Merchant Marine whose gruff and tough exterior belies the fact he’s a devoted dad and grandfather.

His business centers on the suction dredge, Wild Ranger, and his daughters Elaine (featured tonight) and Yvonne (briefly) also are part of the family business and work on the boat with him. Elaine is an ambitious miner, while Yvonne is trying to right her ship after an arrest.

Unquestionably it was Elaine who caught the gold mining bug, and now she is a captain herself and working one of six dredges.

As for her personal life, she has had relationships with fellow miners, and had a daughter back in 2015 with Shem Fogelman.

Make sure to watch the exciting episode tonight, as valuable gold nuggets are in the shallows of the Bering Sea just waiting for someone to suck them all up: