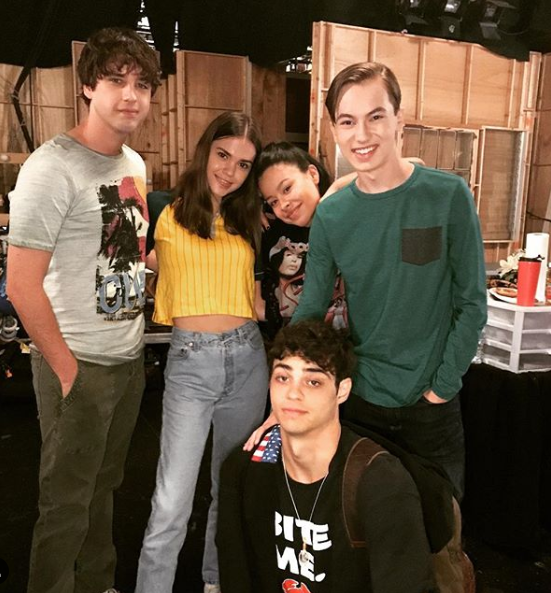 Maia Mitchell and Cierra Ramirez are reuniting with the original cast of  The Fosters for a one-night-only virtual table reading of the original pilot episode script. The special live-stream event will air exclusively on the People Magazine and the Entertainment Weekly websites. The unique reunion event is being held to raise funds for The Actors Fund.

While this LGBTQ+ friendly series ended back in 2018, the cast was happy to reunite to share this unique event with their fans. Though most original actors have moved on to other projects, fans are able to see the characters’ stories continue. Back in January 2019, the show’s first spinoff, Good Trouble, launched on Freeform. This series focuses on Callie and Mariana, as played by Mitchell and Ramirez. The series picks up a few years after the ending of The Fosters.  The plot revolves around the girls’ first experiences in adult life. Fans get to join the girls’ adventure as they move to Los Angeles, California, and navigate adult challenges without the safety net of having their family to fall back on.

While the show revolves around Callie and Mariana, series writers have graciously included the rest of the Foster family in the show as well. These occasional drop-in plots give hardcore fans a chance to find out what their favorite characters have been up to. It also gives newer fans the opportunity to get some insight and backstory on Maia Mitchell and Cierra Ramirez’s characters.

So, while it appears the The Fosters cast is reuniting, in reality, they have not been estranged from each other at all. They are more or less just coming together to create a special throwback moment for fans.

Script Reading to Include Noah Centineo and Other Special Guests

Set to stream at 8pm on July 16, the reading will be in the form of a recorded Zoom meeting and will include a few special surprises for fans.  Noah Centineo was not a member of the pilot cast but will participate in the event. Those following this series from the beginning know that Noah Centineo’s character, Jesus, was originally played by actor Jake T. Austin. Austin, 20 at the time, left the show just after the Season 2 finale. When the show came back after the hiatus, Centineo stepped into the role of Mariana’s twin brother. Though many fans were outraged by the sudden change, Centineo quickly became a much-loved character whose run on the show quickly outshined his predecessor.

As an additional surprise the original writer of the show’s theme song, “Where you belong”, Kari Kimmel will perform the song live during the stream.

Other special guests will include Rosie O’Donnell, who had a lengthy recurring role later in the show.

All For a Good Cause

The live-streamed pilot script reading will air on both of the abovementioned websites. Proceeds will directly benefit The Actors Fund. This organization provides crucial help and resources to people from all sectors of the entertainment field. Fans can donate during the live stream or donate directly to The Actors Fund online through their website.

Don’t miss the stream on July 16 at 8pm. Come back to TV Shows Ace for the latest TV news.