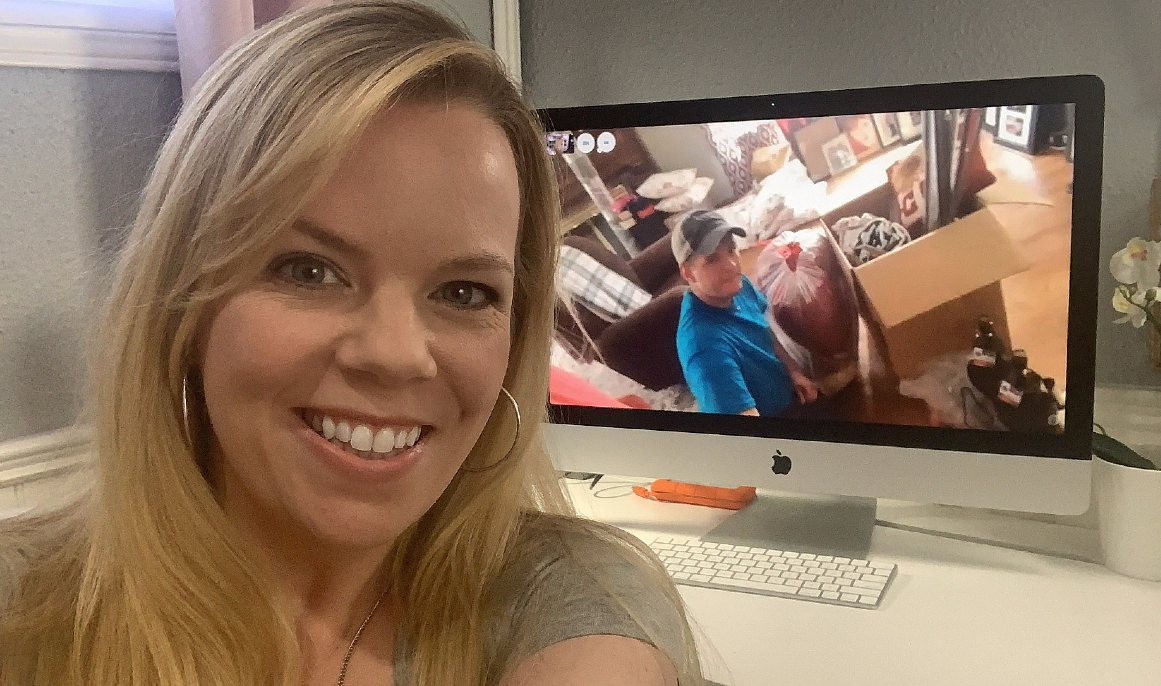 Is your home a Hot Mess House? Meet TED talker and home decluttering expert Cassandra Aarssen who will help you sort the keepsake items from the stuff that has to go. And unlike another famous organizing guru, she won’t be asking you if those old socks spark joy.

HGTV is bringing this gifted decluttering expert in new series Hot Mess House to their network on Wednesday and TV Shows Ace interviewed her ahead of the premiere.

Families who are lost in a tidal wave of overwhelming disorganization and clutter will appreciate this series.

These folks will get the virtual help they need in HGTV’s latest fully self-shot series, Hot Mess House. While Cassandra helps each client tackle the physical process of organization, she advises on how they can manage the underlying emotional attachments that often lead to housing too much stuff.

Premiering this Wednesday, the series boasts Canadian organization expert and coach Cassandra Aarssen doing what she does best—helping families tackle the chaos and challenges of home organization and learn a new way of managing their stuff that will stay with them the rest of their lives.

What to expect on Hot Mess House

In each episode, Cassandra will take a video tour of the client’s home where she finds overflowing spaces, kid’s rooms, play spaces, stuffed kitchens and inundated basements.

After the home tours, she will help them identify an organization style that works best for their ulives, and give them the necessary resources and tools for a decluttered life aiming to lower stress in the process.

“What I tell my clients is, ‘you’re not disorganized—you’re just not organizing for your unique style,’” said Cassandra in a press statement. “But together, no matter the space, or what’s filling it—I will help you take back control of your home and your life. It’s so important that we let go of the past, so that we have room for the future.”

Throughout the season, Cassandra will mentor families with all types of disorganized dilemmas, including a young couple living in a cramped 350-square-foot apartment and a family with closets bursting at the seams. In one emotional, touching episode, Cassandra’s organization tips help one woman find the engagement ring that she thought was lost.  We spoke with her at length about all of it:

You are very different from Marie Kondo, who wants us to fall in love or fall out of love with our things. You take a much more pragmatic approach to it. Before we get into the nuts and bolts of your particular show, walk me through the production aspect of the self shot series. What does that mean? What do viewers have to look forward to?

Cassandra Aarssen: Yes, I think honestly this is one of the coolest parts of the whole show is that this homeowner, the families are filming everything themselves. And so we’re doing a Skype call.

So we’re recording that Skype call and then they each have GoPros that they’re sort of filming and they’re filming on their phone and the entire thing is completely self shot. I’ve never been on TV before, but the idea of know camera crew, the lighting sound, just families sort of figuring out the technology.

Not only are they decluttering. that’s just something I’ve never seen before. I’ve never even heard of being done before. And I think that’s one of the most amazing parts.

So you’re guiding them remotely. You’re analyzing their space, you’re talking to them and you’re trying to figure out what kind of an organizer they are that they’d be comfortable with?

That’s always the first thing is like, okay, I know you think you’re messy and I know you feel like this basically a disaster, but show me what is working because that’s all I can identify, their organizing style.

Even if it’s something small or a specific aspect of their life that they are organizing and maintaining,  that’s a really good indication to me for figuring out what their organizing style is.

Then we talk about what isn’t working.

We make a plan and I give them homework.  I give them rules and then I check back in with them to see how it’s going. And once they decluttered then we go over their organizing plan for their unique organizing style.

There’s single people and people whose children have grown and left, and then there’s families with children.  How do you help parents help their younger children understand why it’s important to be organized?

Cassandra Aarssen: Yes. I think as parents we want to give our kids everything. And a lot of the times that also translates the stuff. And there’s Christmas and there’s birthdays and more.

Whatever they desire we’re giving them, and in the process we’re filling up their space.  And because they grow so fast, they outgrow things really, really quickly.

And that’s why it ends up these families have a lot of clutter and stuff. As parents, it’s so important that we teach kids the life skills of just letting go. Letting go is a life skill.

Being able to say, ‘I’m not using and loving this and I don’t need it anymore.’ Something that’s so hard, but it’s something that, it’s important that we show as children. So they don’t struggle as adults.

Cassandra Aarssen: I don’t think anyone’s messy. I think that there are people who are stuck and need to identify their style and find their “why.”

My job is to discover why they’re struggling. Every single person has a different reason of why there struggling to let go. And it doesn’t take long to sort of dig that out of someone to get to their core, their “why.”

It usually falls into some pretty similar categories for different people. So they’re afraid they’re going to need it one day. Because the fear of making them [give up the item], that ultimately comes from that perfectionist personality.

I know you mentioned hoarders. A lot of people, believe it or not, who are hoarders are perfectionists. It’s a real fear of doing it wrong.

And it’s that indecision that makes them hold on to everything. It is my job to help people break down their fear and get to the core reason, the core belief that’s underneath.

And absolutely for some people, it does stem from something that I cannot help with, but 99% of the time it is just the person who needs to let go of the fear and discover why they’re having that stress and anxiety in the first place.

You talk about the types of organizers, the macro systems organizer and the traditional detailed micro organizer. What if you have a marriage where one is one and one is the other? How do you compromise that situation?

Cassandra Aarssen: Yes. The golden clutter bug rule is that you always default of macro organization and shared spaces and the visual system. Because it’s so much easier for a micro organizer to sort of let go a little bit and have a lesson detailed approach.

And it is for a big picture macro thinker to try to think in, in lots of details and categories. It is a lot easier for the person who prefers those things hidden to have something visual than it is to try to force a visual organizer to remember everything when it hits and behind those doors. Yes.

HGTV ‘s press notes said that you will help a young couple living in a 350 square foot apartment, when people are living in small spaces, what are some of the golden rules of organizing for people who live in very small spaces? Are they a little bit different than someone who lives in a 3,500 square foot home?

Cassandra Aarssen: They definitely have to be a little bit more strict with the rules because they can only live for today. They can’t let the fear of tomorrow fill their home.

So that’s exactly what was happening with this particular couple is, well, what if that breaks? What if I need that one day? What if I’m going to paint in the future, so I’m going to keep everything brush and every paint roller?

And so we can do that to a degree when we have 3000 square feet, but in 350 square feet, we really have to look at what’s serving me today and, and, and keep only those things.

What would be the best advice just for all of us that you could give for instantly improving the flow of our homes, the organization of our homes, decluttering our immediate space. What is one of your top go to recommendations?

Cassandra Aarssen: When it comes to the decluttering, The first step is to do what I call the “four sort method,” but we can even break that down into two. You start small one drawer, one closet, one pile, and only sort them into keep or go.

So always the first step, is to ask yourself, what am I keeping and what am I letting go?

And just simplifying it like that, it sort of takes the “overwhelm” aspect out of the equation. It takes the overthinking and the procrastination and you can just get started.

That’s great advice. How many episodes do you have for Hot Mess House?

Cassandra Aarssen: There are four episodes and three of them have two families and then one is dedicated just to one family during two spaces.

Excellent. I hope that they give you a crew and you’re able to actually interface in person for season two, hopefully we get past this COVID quarantining…

Cassandra Aarssen: You know, I have got to say, I love that idea…but usually when I do help clients in person, we do the decluttering and then I organized for them and then surprise them.

I have to tell you, at first I was like, ‘how is this going to work?’

They’re going to do the organizing without me and they’re doing it all by themselves and surprising me?

But I have to tell you honestly, it has been so much better this way. It really is. It’s just so incredible. They’re learning more, they’re having more confidence in their own ability at the end of the day.

And then I get to be surprised with how far they’ve come. So I definitely want this COVID to be over with, but I cannot tell you how incredible this has been. These families doing it themselves.

That’s so cool. You’ve empowered them. You gave them the skills, like letting a child who was own homework and not jumping in and doing it for them because you know the answer.

I mean, they can do it themselves. They don’t need me. I’m just cheerleading and providing direction.

But, I’m going to be totally honest. A lot of them did a way better job than I ever could have. It’s their stuff, and it’s their organizing style and they’re owning it. I’m so proud of all of them.

Fans are invited to connect with Hot Mess House on HGTV’s digital platforms. Each episode will be available on HGTV GO the same day as the TV episode premieres—Wednesdays beginning June 24. Viewers can visit HGTV.com/HotMessHouse for photo galleries and exclusive videos and can follow @HGTV and #HotMessHouse on Facebook, Twitter and Instagram for additional show content and updates. Fans also can follow Cassandra on Facebook and Instagram.