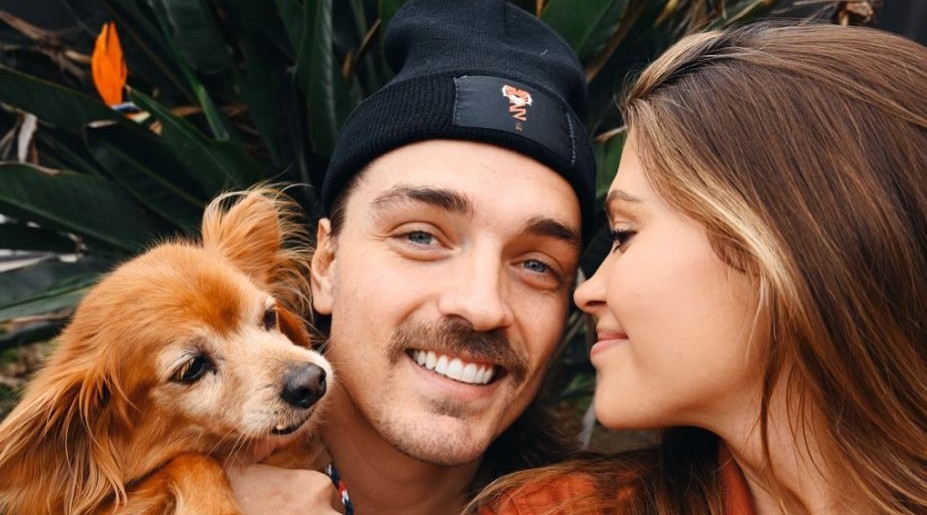 Recently there has been speculation that there may trouble in paradise for Dean Unglert and Caelynn Miller-Keyes. Since the rumors started they have shared numerous posts together. This put all the speculation to rest. Dean and Caelynn are adorable and fans are glad to see them still happy and in love. In fact, Dean just shared a very sweet birthday message for Caelynn.

In a video shared on Instagram, Caelynn is seen shaving off Dean’s pretty locks of hair. His hair had gotten pretty long. Exactly how much she cut off can be seen in the video. The video can be seen below.

Aside from shaving Dean’s head, Caelynn has recently shared photos of her rock climbing. She said Dean had finally got her climbing. She joked saying Pappy was next.

Dean also made a very sweet birthday week post to Caelynn. He posted four photos on Instagram. One was of her and Pappy. The others were of her and Dean together. They are absolutely adorable and look so cute together.

He captioned saying, “This time last year, some jerk was breaking up with her on a beach in mexico. hopefully this birthday goes a little smoother for @caelynnmillerkeyes 🤞🏻.”

this time last year, some jerk was breaking up with her on a beach in mexico. hopefully this birthday goes a little smoother for @caelynnmillerkeyes 🤞🏻

Fellow Bachelor alum Becca Tilley commented on his post. She said, “Glad that jerk stopped being an idiot and went back for her! Y’all are the best! ❤️.” Dean responded to Becca saying, “@beccatilley and all i needed was a tilley pep talk.”

They have been together almost a year

After Dean had left the shores of Mexico without Caelynn, he ultimately went back. They reunited and left Bachelor in Paradise prior to the finale. They have been together ever since. Caelynn has been there for Dean through some rough times. In December, Dean broke his leg while overseas. Caelynn dropped everything and flew to be by his side. The couple reportedly participated in a  commitment ceremony leading many to believe they secretly married.

As of now they are not married and in the past Dean has been against marriage. However, Caelynn has changed his world and his way of thinking. While they seem different in many ways, they are great together. Caelynn has started loving van life and more of the great outdoors. The two also recently adopted Pappy their foster dog.

It’s good to know these two are still going strong and in love. Stay tuned for more updates on Dean and Caelynn and all your favorite Bachelor alums.