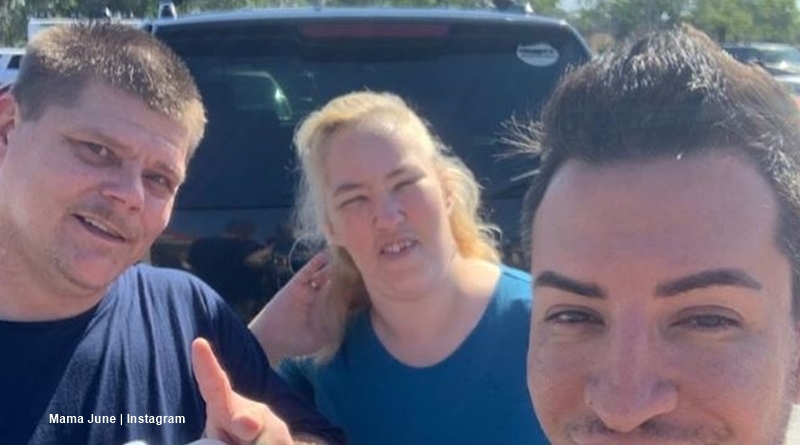 Mama June Family Crisis trended when WEtv released the episode this week. June admitted to Pumpkin that she spends about $2,500 daily on meth and other drugs. But, during the episode, she defended Geno who many fans think is directly responsible for her sliding into the gutter. While June agreed to go into rehab, fans wonder if she’ll ever come right with Geno in her life. But, she seems determined he’s that man for her. Fans wonder if Geno’s also some sort of addiction.

Mama June admitted she used drugs in the past, fans know Geno did as well

During the episode, fans saw June fail a drug pee test. It all went down at the WEtv production office. June denied she takes cocaine, but admits to a cocktail of other over-the-counter medication. And she admitted to Pumpkin she spent about $2,500 on her heavy street drugs. While June admitted she sold her home as her drug habit broke the bank, she strongly defended Geno.  Meaww reminds readers that she told Pumpkin she and Geno were “clean for months.”

In real life, fans noticed that Geno and June appear to be together. On March 15, June shared a photo of her with Geno when they met with Adam Barta. Fans know that Mama June currently spends time with Adam in Florida. There, she tries to get her fitness back. But that photo which revealed her with Geno makes people wonder if she’ll ever kick her habits with him around. On the show, it became evident that apart from the court hearing for alleged possession of crack and paraphernalia, he’s still in her life.

Fans think Geno’s such a big part of the problem, he’s also an addiction for June

When fans saw the photo of Geno with June and Adam Barta, many of them reacted with sadness that she still hangs with him. One fan wrote, ” Why are you still with the man that cost you your family? Why after you lost everything you earned? You deserve better than him. Geez, wake up‼️” Now the show aired the scene where June defended him, more people over on Twitter spoke up about Geno. She seems unable to push the man out of her life.

Ran into my old friend @adambarta at the market. y’all remember him from Alana’s music video and song ‘Moving Up’ from 4 years ago. Follow @adambarta and show him some love

One fan firmly believes that Geno became an addiction for Mama June. They noted, “#MamaJune still acting and talking like an addict. She’s addicted to Geno. She talking all about “we” instead of I. Well Pumpkin doesn’t give a sh*t about Geno. This is about the real family. Geno is not a part of that. There’s no way June can stay with him and stay sober.”

Plenty of fans agree that as long as Geno stays with June, any attempts at rehab will fault. In fact, one person suggested that separating her from Geno should be the very first step for Mama June. 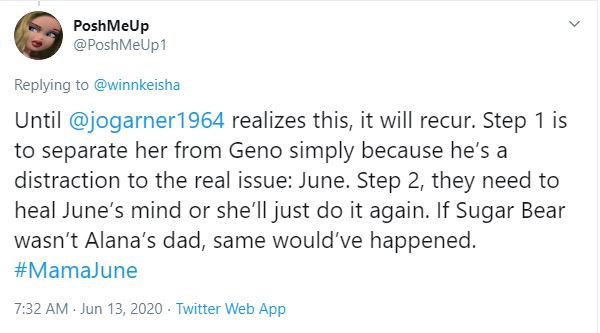 What do you think about June still defending Geno? Do you agree that rehab’s not likely to work with Geno in Mama June’s life? Sound off in the comments below.