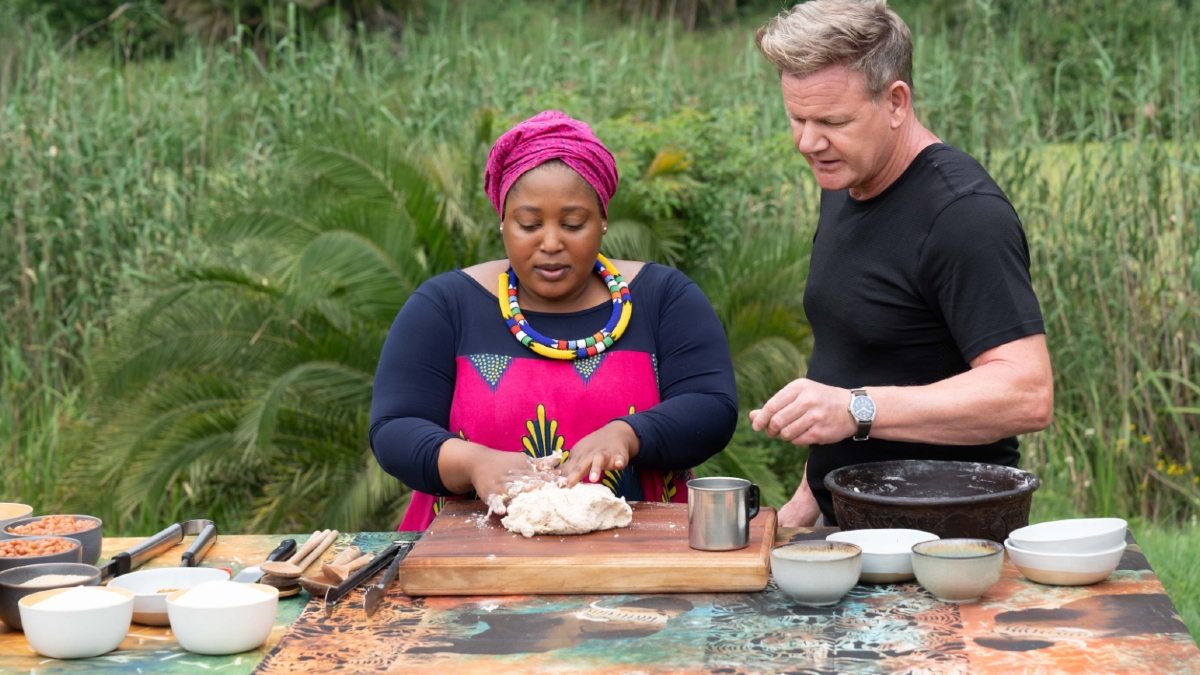 Chef Gordon Ramsay’s next episode of Uncharted takes us to the lush Zulu nation in South Africa where a local chef, Zola Nene, steals the show with her personality and humor.

Imagine cooking al fresco for a chieftain’s feast, except there is a territorial and curious hippopotamus a few yards off and coming closer to check out what you are doing?

This unscripted moment actually happens to Zola and Gordon on the exciting episode that shows off the tantalizing flavors and techniques of chef Nene on her home turf.

Unquestionably, Zola is an accomplished chef in her own right. Together with Uncharted star chef Gordon Ramsay, the two are shown to have instant chemistry and are a terrific combination to observe cooking local fare in the wilds of South Africa’s KwaZulu-Natal.

TV Shows Ace spoke with her at length about this episode, working with Gordon Ramsay and the rich Zulu culture.

Uncharted features a chef, Zola Nene, who by all rights should have her own Food Network or Netflix cooking show. Maybe National Geographic can get all these amazing chefs from Uncharted together for a new cooking series that explores more of each region’s culture.

Ms. Zola Nene is a South African chef who was raised on a farm with her Zulu family. In Uncharted with Gordon Ramsay, she credits her grandmother for giving her the experience and the recipes to create delectable dishes, influence by traditional African and Indian cooking styles.

These featured dishes which are unique to the KwaZulu-Natal region (which Zola shared with Gordon in Uncharted) and are what’s for dinner on a menu prepared for an esteemed visiting Zulu Chief.

Zola appreciates farm-to-table food as she literally grew up on her family’s farm. Everything they consumed was taken directly from their land.

Later in her life, she left the farm and went to law school to become a lawyer.  But after graduating, she realized that wasn’t where her heart was, and she pursued a career as a chef, thanks in large part to her father’s counsel.

Culturally, the roles of women in South Africa and specifically in the Zulu nation have been challenging for any woman wanting to break away and achieve on their own terms. But Zola persevered and continued her studies in the UK where she gained culinary experience in a professional setting.

Ultimately she returned home to South Africa and she enrolled at the Institute of Culinary Arts, completing her culinary training with a degree.

In South Africa, people adore her as the host and food stylist on Expresso, one of the most famous breakfast television shows in South Africa. She has authored cookbooks, Simply Delicious and Simply Zola, both filled with regional recipes and anecdotes.

More than just a famous chef, Zola is a philanthropist and activist devoted to feeding malnourished children impacted by poverty in South Africa.

She has been working with The Lunchbox Fund by providing meals to children and teaching others how to make economical choices in the kitchen.

TV Shows Ace spoke to Zola about this episode and learning more about Zulu culture:

We loved your episode with Gordon Ramsay.  First, talk about the short time you spent in England, how did that inform what you wanted to do eventually back in South Africa?

Zola Nene: I’m glad you enjoyed it – I always think it’s such a great compliment when people say I make it look easy, so thank you for that.

The time I spent in England was my very first exposure to cooking in a professional kitchen setting. My dad has suggested that I go and work in England as a cook in order to see if I really was passionate and loved it as much as I thought I did.

I started as a commis chef, peeling and chopping veggies. After spending two years watching and learning from chefs and working my way up the ranks in the kitchen I knew that I definitely wanted to become a chef.

That’s when I returned to South Africa and enrolled at Culinary Arts school for the three-year course to get my chef qualification.

How can we recreate the braai- it appears to be a flatter outdoor grill?

Zola Nene: A Braai is essentially the term we use for cooking over open flame or fire. A Braai —the actual vessel—comes in many forms, what you use isn’t important, it’s more the method.

Use wood to start the fire—or charcoal as a cheat—then place a grid on the fire and cook the meat until deliciously charred.

Do you ever plan to come to the USA and if you have been here, where would you like to check out?

Zola Nene: Oh my goodness, absolutely! I have been dying to come visit the USA to explore the food scene.

I’m keen to visit San Francisco – I hear the culinary scene there is amazing, and I would love to visit New Orleans for the food and the atmosphere. New York is on my must-see list… those three would be my starting points.

I’d love to explore all the different corners of the USA and get a taste of everything!

How did becoming a TV star on Expresso in South Africa change your life?

Zola Nene: Becoming a recognizable face on TV definitely helped propel my career to what it has become.

Expresso was a great platform to help me share my food with a large number of people. I’ve been blessed with so many great opportunities in my career and every single one has been incredible and life-changing.

What did you make of Gordon Ramsay? When did you first hear of him, and when did you meet him?

Zola Nene: Everyone knows who Gordon Ramsay is… if you’re interested in food and haven’t heard of him, you have to be living under a rock!

I’ve watched him on TV for years and always thought of him an intimidating and shouty character. When I was getting ready to meet him, I expected him to arrive guns blazing.

But what I experienced was the opposite! He was so kind, so warm and so engaging. I love how Uncharted shows a completely different side of Gordon, a side where he becomes the student and is eager to learn.

He was an absolute gentleman and so very easy to talk to, I had so much fun filming with him. He is a brilliant chef and presenter and I definitely learned a lot from him in the few days we spent filming together… oh and he’s SO tall, I didn’t realize how tall he was until I met him in person.

What do you want Americans and especially African-Americans to know about Zulu culture? I ask this as so many people now have their DNA (23andMe) which can reveal their ancestry in detail.

Zola Nene: I’d love for Americans to know that Zulu people have an amazing rich sense of culture and heritage. I hope that the beauty of our country comes across in the episode.

And that it encourages people to come and visit South Africa.

The episode is just a drop in the ocean when it comes to the amazing things that South Africa has to offer! Come and visit, not only KZN (KwaZulu-Natal)  but all the provinces so that you can get a taste of all the vast cultures that exist in our beautiful country.

Appreciated your episode and learning how gorgeous the KwaZulu-Natal area of South Africa is. The Zulu chief – tell me more about him, a direct descendent of Shaka Zulu, what is his name and how did you reach out to him for this episode to include him and his family?

Zola Nene: Yes, he is a direct descendant of Shaka Zulu, Nkosi rules over thousands of people in his district. The National Geographic team are the ones who can elaborate on how they convinced him to be part of the episode, they did all the work there.

I noticed the Zulu chief had armed guards with him, and his sons. Talk about what being a Zulu woman means in societal roles – the woman in blue top, was this lady his only wife?

Just to clarify – there’s only one Zulu king —currently Goodwill Zwelithini— but there can be a number of chiefs that rule their respective districts. The Chief arrived with guards because he was entering an environment that was unfamiliar.

It his protocol is to travel with security. I’m not entirely sure if the woman in blue was his wife or not, unfortunately I can’t recall.

Flavor profiles-you describe to Gordon are that they are “simple, vibrant and fresh,” any other key words to summarize your cuisine?

Zola Nene: Those words describe it perfectly… we eat from the earth and keep the flavors clean.

Gordon stated in the episode that Zulu people do not like their meat rare…talk about other unique Zulu customs for chefs and cooks to follow., is meat central or for special occasions? What Indian influences are most woven into Zulu cuisine now over time?

Zola Nene: That’s a bit of a generalization… what I meant was most Zulu people, like the Chief, like their meat well done… of course there are exceptions to the rule, like me, I like my meat medium.

In terms of customs, there aren’t any particular cooking techniques, but men are traditionally always served first and get the best cut of meat. Meat is always part of special occasions and meals.

Because of the large population of Indian people in KZN, Indian cooking methods and spices have integrated into the cuisine. Curries are a prominent part of food culture in KZN.

Recipe request! The pelepele marinade and sauce recipe for meat, can you offer our readers one for their summer barbecues to try?

Zola Nene: Pelepele is actually the Zulu term for chilies… so pelepele is basically a spicy chilli sauce.

Everyone has their own way of making it and different degrees of slickness depending on their preference. I prefer mine milder, so I take the seeds out of the chillies.

Sauté the chillies with onions in oil, then add sugar, vinegar, and salt. Blend and use as a marinade or as a condiment with meals.

The hippo behind Gordon that came over to you two- how dangerous was that scene and moment? Have you ever found yourself in a dangerous situation where a large animal was too close?

Zola Nene: Hippos are said to kill 500 people a year in Africa, so that was definitely a dangerous moment… I was terrified!

Especially since I know I’m not a fast runner so the odds of surviving a race to safety against Gordon, were not in my favor.

We had a very thorough safety briefing before we began filming in hippo territory, so we were relatively safe. I tend to stay away from dangerous animals, unless I’m in a safari vehicle, so that was definitely my first close encounter.

What was the Zulu bread “Ujeqe” you were making with Gordon? It was steamed bread?

Zola Nene: Yes, Ujeqe is steamed bread… in Zulu we call it Ujeqe, other cultures call it dombolo

Zulu dancing – tell me more as it relates to a fine meal like you prepared for the Chief?

Zola Nene: Traditional Zulu dancing is called “ukusina” which is a dance done by lifting your extended leg then abruptly bringing down to the ground, alternating legs. It’s usually performed during big traditional celebrations.  Traditional Zulu music is called maskandi, there are many popular artists in this category. This music is revered among the KZN.

Make sure to tune into Zola’s South Africa episode, which airs on Uncharted this Sunday on National Geographic Channel.