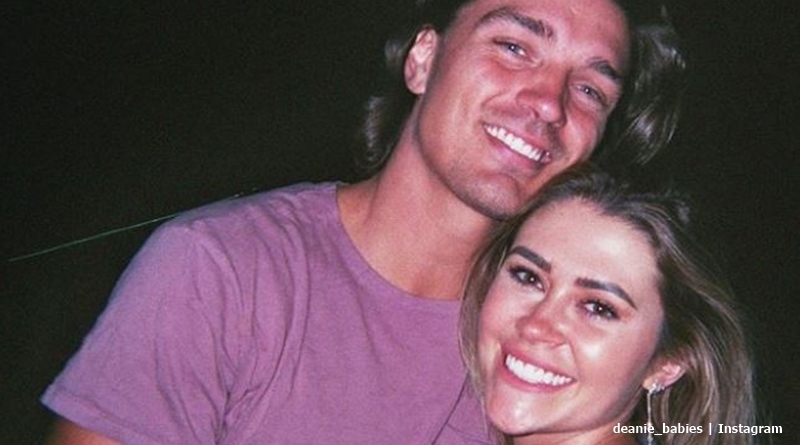 Bachelor in Paradise (BIP) fans know that Dean Unglert and Jared Haibon team up on their Help! I Suck At Dating podcast. Their quest involves talking to all sorts of people about how to make relationships work. Often amusing, Dean got rather serious recently and revealed why things work so well between him and his “significant” other, Caelynn Miller-Keyes.

TV Shows Ace reported that Caelynn Miller-Keyes went out of her way to make Dean’s quarantine birthday special. Lots of lovely touches like an indoor picnic came out. And, apart from spoiling him with breakfast in bed, she made a fort. There, they snuggled up and watched movies. Dean said the whole effort was actually “really cool.” Her YouTube vlog shows she also got into Dean’s lifestyle involving a lot of travel as well. There, fans see she cobbled together really good footage of their adventures with Pappy, their rescue dog.

And yet, fans also know this relationship that works nearly never happened. Cheatsheet reminded readers that Dean messed around on Bachelor in Paradise. First, he took up with Kristina Schulman. But, when Danielle Lombard pitched up, a “love triangle” came about and Kristina got fed up and went home. BIP fans saw them hook up later, but it never worked out. Dean decided they didn’t fit in so many ways. In the last season, fans saw Dean hit it off with Caelynn, but he left anyway. Then, he realized that wasn’t a great move and came back. And, now their relationship grows and seems strong.

sorry we had to leave #bachelorinparadise early, the vantasy suite waits for no one 🚙

Bachelor in Paradise couple suit each other, Dean reveals why

Now together for a year or so, fans think Caelynn and Dean probably take it away as the most successful couple on the ABC show. Over the festive season, Dean went away to ski in Switzerland. But following his horrendous accident, Caelynn rushed over and nurtured him. They made their way home slowly. Perhaps that cemented their relationship. Later, Caelynn admitted on her Instagram that she and Dean held some sort of commitment ceremony.

On his podcast, Help! I Suck at Dating, Dean said he and Caelynn work out as they just be themselves. They don’t hide their flaws from each other. They don’t put on an act and pretend in certain situations. The BIP star noted, “I feel like in all my other relationships before, I would hide certain aspects of myself because I didn’t really exactly who or what I was.” But with Caelynn, he learned about transparency and “being himself.” And, most importantly, they don’t tell each other they should be anything other than who they really are.

It looks like Dean and Caelynn work out because they simply don’t try and change each other. Do you think that’s possibly the best approach in a relationship? Sound off in the comments below.

Remember to check back with TV Shows Ace often for more news about the cast of ABC’s BiP.