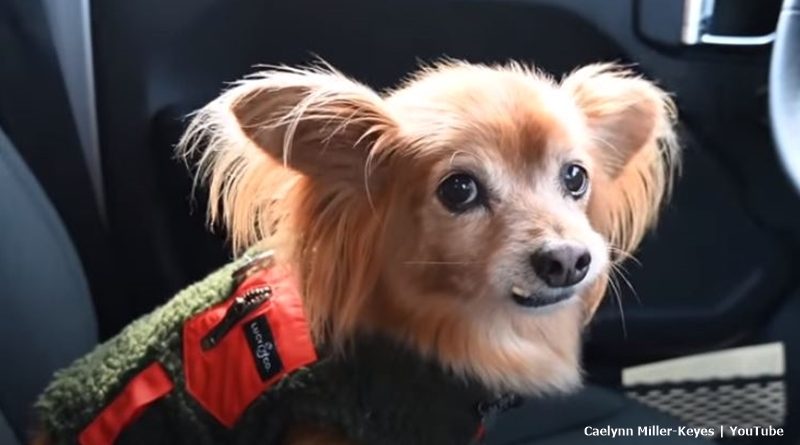 BIP star Dean Unglert just needs to post up a photo of his rescue dog, Pappy, to get thousands of likes. On Wednesday, he shared a picture of himself and Pappy twinning, and it got nearly 100k likes in just four hours. Actually, since he and Caelynn Miller-Keyes decided to adopt after fostering the elderly pup, their popularity soared on Instagram.

Bachelor In Paradise stars Dean Unglet and Caelynn became fan-favorites when they decided that Pappy deserved a new and loving life. TV Shows Ace reported that Dean mentioned the old doggie comes with a whole lot of “health issues.” But, they decided he’s a loyal little fellow, so they hope to make his golden years special for him. Luckily, Pappy enjoys travel and took to it quickly. Golden sunsets, long beaches, and craggy mountains now fill his life after some time sent behind bars in a shelter.

Right now, it looks like Dean and Caelynn don’t travel as much, and they spend more time in her apartment. But Cheatsheet reported he intends to fully pick up his travels after his leg heals fully. And, presumably, once the coronavirus epidemic ends. But the BIP stars got away to Oregon in March, and little Pappy went along for the adventure. Dean shared a photo of himself twinning with Pappy and it looks super-cute, fans think. And, if you want a bagful of great Pappy in Heaven moments, check out Caelynn’s vlog below.

In the photo that the Bachelor In Paradise star shared, he and Pappy sat outdoors looking at each other. Pappy showed off his little snaggle-tooth and he and Dean both wore the same colored knitted hats. Also, Dean wore blue, and Pappy wore a blue doggie vest. Dean captioned it with, “They say dogs start to look like their owners after awhile. but idk if i believe that.” Fans laughed at that as they looked very much alike. Only, Dean’s not got that same tooth. Well-known cosmetic dentist Dr. Chris Strandburg commented that he could “fix that tooth.”

Plenty of fans thanked Dean for giving Pappy his “best life.” And loads of BIP fans commented on the picture that showed Pappy twinning with Dean. One said, “Pappy is living his BEST LIFE!!!! So great that you guys adopted him!!! ❤️” Others noted that they really look similar. Several of them noted that “matching hair” and the “same mustache.” Dean actually shared four photos of the cute little guy, and in one them, Pappy abandoned the knitted hat.

they say dogs start to look like their owners after awhile. but idk if i believe that. i posted about our oregon trip from last month on my blog, we even got to bring the little man. be sure to click the link in my bio and give it a read! and don’t forget to watch caelynn’s vlog from our trip on her youtube channel.

What do you think about Pappy and Dean twinning? Do you love this little dog and his wonderful devotion to his new “parents?” Sound off your thoughts in the comments below.