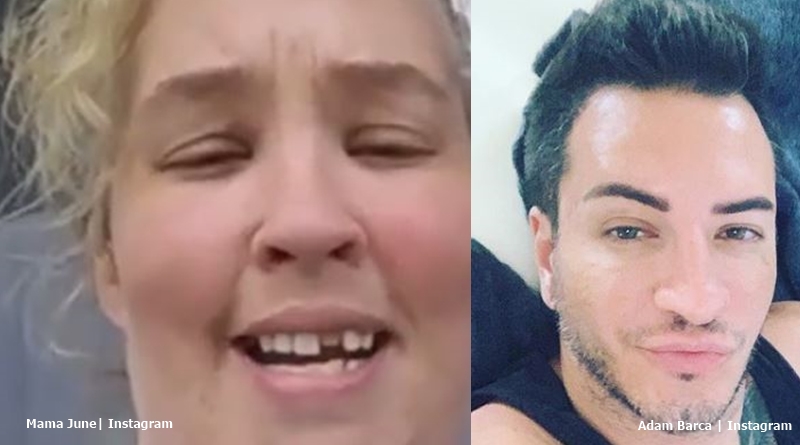 Mama June: From Not To Hot, Family Crisis airs on WEtv at the moment. Musician and reality TV star, Adam Barta also featured on WEtv series Dr. Miami in 2017. Plus, he once worked in collaboration with Honey Boo Boo, June’s daughter, to produce the song, dance and music video called Movin’ Up, in 2015. June also featured in the video. So, he and June go back a few years. Recently he showed up in three photos with June, and fans now urge him to help her.

As fans of the WEtv show know, Mama June’s been absent and estranged from her daughters for a long time now. She took off with her boyfriend Geno Doak and hung out in casinos and hotels. The current season of the show brings her daughters and her sister Doe Doe trying to find her. Pumpkin fears her mom might continue doing drugs and may even end up dead. Frantically, they all search for her, hoping to get her home and get her some help.

Just ahead of the season’s premiere of Mama June From Not To Hot, Family Crisis, June remerged on social media. Fans seemed a bit taken aback as she carried on, as if nothing wrong ever happened. In fact, she then went and started doing her own Cameos and already picked up a number of reviews. Plus, she shared other photos on her Instagram. And, two of those featured Adam Barta. Obviously, he sees her a bit more than her own daughters.

Adam Barta seen with June and Geno in March, now again in April

Popculture noticed that June shared a photo of herself with Geno and Adam Barta back on March 25. “Ran into [an] old friend at the market,” she said.  That old friend was Adam Barta. June reminded fans that he worked with Alana on the song and video four years ago. Fans slammed June and told her to get herself back in line and make up with her daughters. A number of them also told her to dump Geno.

Then, an article by Amedpost.com on March 27 revealed that June and Barta went to deliver food to a food bank. The food banks help feed people in need during the COVID-19 pandemic. Their article showed Barta with June as she took the food in. Mama June appeared to use a facecloth as a sort of anti-viral mask. Now, another photo featuring Barta appeared on Mama June’s Instagram. The same photo got shared by Adam Barta on his own page on April 14.

The photo that June and Adam Barta shared, showed them inside a store. June captioned hers with, “Social distancing safely. 😷 @adambarta.” Then on his post, he wrote, “What else is there to do during this time then social distancing, munching and chatting!? Stocking up on some essentials with @mamajune 😬 💕(sic).” Fans on Adam’s page reacted and urged him to help June.

One Mama June fan said, “If she is really your friend, please talk to her; help her. JUNE, PLEASE!! So many of us are praying 4 you.” Then another one noted, “Please help mama June’s, you are friends.” A follower also said,” Talk some sense into her.” But many more just berated June and told her to “go back home.”

What do you think about June seemingly hanging with Adam Barta quite often these days? Do you agree that if he’s her friend he should try and help her make amends with her estranged daughters? Sound off your thoughts in the comments below.

Remember to check back with TV Shows Ace often for more news about the cast of  WEtv’s Mama June: From Not To Hot.