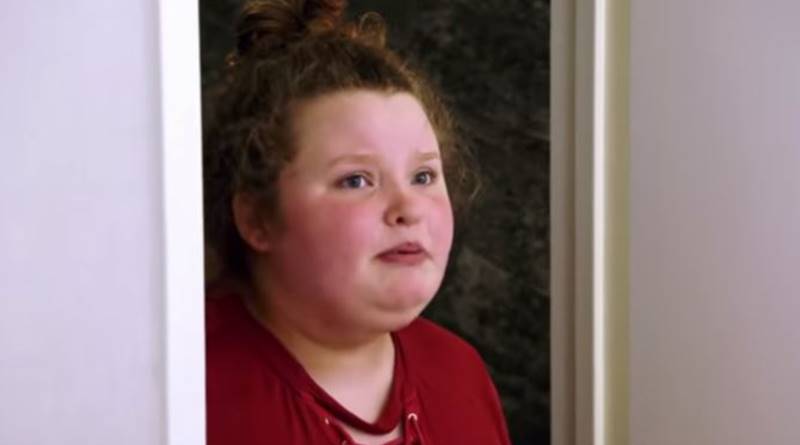 Honey Boo Boo (Alana Thompson) went to live with her sister Pumpkin after her mom, Mama June refused family intervention. In the last season of the show, fans saw her crying about her mom. Then, we saw that her dad, Sugar bear, allowed Pumpkin to take temporary custody of Alana. She’s going on 15 now and described how much she loves going to school.

Honey Boo Boo gets on with her life, while her mom goes downhill

TV Shows Ace noted that Honey Boo Boo’s a really attractive young woman these days. In a way, it’s sad that her mom estranged herself from her daughters and took off with Geno. After all, her youngest daughter can’t be put in a bottle and opened up later. The time she misses now includes seeing Alana enjoy her school, make friends, and even date a new boyfriend. While the tragic story of Mama June unfolds almost weekly, Honey Boo Boo seems determined to look to her own future.

This week, news emerged that June’s selling her possessions for cash. It looks like gambling and living out of hotels bust her budget. Plus, The Sun noted that in March 2019, Shannon and Geno were charged with possession of crack cocaine – a felony – and a crack pipe – a misdemeanor.” So, possibly she also needs money to sustain a drug habit, fans think. It certainly can’t be easy for Honey Boo Boo to read the tabloid coverage and live with the fact her mom doesn’t seem to care about her. But, she’s trying to get on with her life.

Alana’s got a boyfriend, loves school and made friends

Taking to her Instagram stories for a Q&A on Thursday, Alana invited questions. One fan asked her, “How’s life?” She replied, saying, “Good. Honesty making good grades.” Then she added, “Have amazing friends,” and she “honestly can’t complain.” Well, that’s good news as she so badly wanted to go to school. Plus, Sugar bear insisted that if she went to school, then he wanted to see her work at it.

During her Q&A, one fan asked, “Who’s your boyfriend?” Well, she’s not naming names, but Honey Boo Boo described him as a  “really amazing guy.” She added heart emojis. Something else that came out, is that these days Alana sees her other sister Anna a lot more. Anna became estranged from her mom way before Pumpkin and Alana. It certainly seems that June’s got a knack for turning her back on her kids. Honey Boo Boo said, “I see Pumpkin and Jessica every day. And now we have moved closer, I see Anna a lot more.” 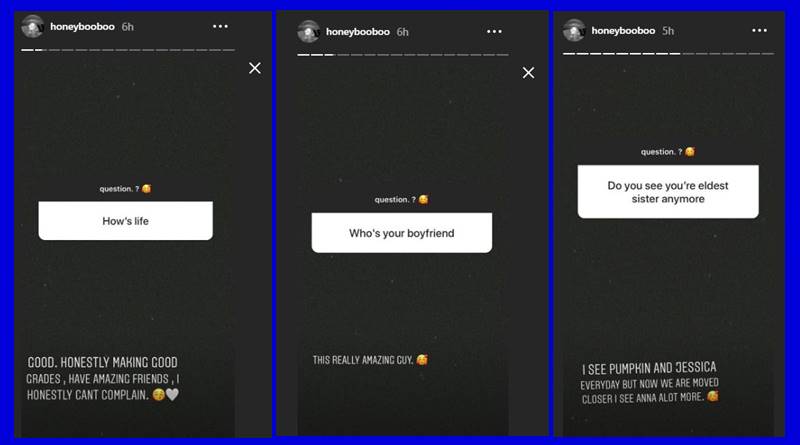 Additionally, she spoke about her future plans. Alana said, “I want to graduate high school.” Then she wants to go to a “cosmetology school.” After, that, she’ll see where life takes her.

Are you happy to hear that Alana sees more of her sisters, enjoys school, made friends and has a special guy? Sound off your thoughts in the comments below.

Remember to check back with TV Shows Ace often for more news about Honey Boo Boo.