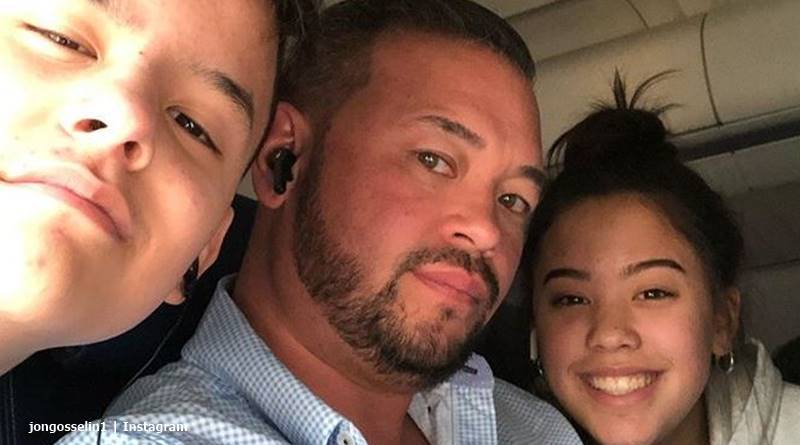 Jon Gosselin joined many celebrities and parents in the online Kobe Bryant tribute. The #GirlDad tag went viral in memory of the famous basketball player, who loved his daughters deeply. Recall, not only Kobe died in the helicopter, but his daughter Gianna, as well. Jon’s post showed him and Hannah. He doesn’t get to see his other daughters, but Hannah looked happy, and fans loved the post.

In the photo that Jon Gosselin shared, Hannah looks so happy, and many fans loved that. He captioned it with just the Kobe Bryant tribute hashtag. Hannah’s got her arm around her dad’s shoulder, and that huge smile lights up her face. Many fans commented about happy she looked. But others felt it was so sad as well. That’s because he doesn’t see his other daughters. For Jon, pretty much the original family of eight kids really just became two.

The twins, Mada and Cara attend college now. And, the other four sextuples remain with Kate. Only Collin and Hannah live with their dad. And, that’s only because they requested it. One fan said, “Love Hannah!! Sure wish your other 4 daughters would start to come around. Just because they haven’t yet doesn’t mean they won’t! Keep fighting for them.” Another one noted, “you deserve to be able to see all your girls!!!!”

Fans know that son Collin got sent to an institution by Kate. But, Jon filed for custody and took him out of there. TV Shows Ace reported that Jon’s “new family” which includes his girlfriend Colleen and her kids looked very happy at Christmas. But only Hannah and Collin get the benefit of their dad in a happy place. It’s been a long time since fans of Jon and Kate Plus 8 divorced. Only recently, the gag order by TLC came off him and Jon’s been more vocal about his children.

US Weekly reminds readers that Jon fought a long fight to get Kate to stop filming with his kids. They reported, “Jon [Gosselin] went to court in 2019 to prevent Kate from allowing TLC to film the kids.” Fined for “contempt of court,” it related to “an episode of her Kate Plus 8 series aired without…work permits for the teens.” Jon later said that he and Kate probably never ever see to “eye to eye.” So, any reconciliation won’t come from her.

Will Jon one day spend more time with all his kids?

Cara and Mady attend college now. Perhaps, as they mature, they’ll make more decisions for themselves. Maybe they’ll reach out to Jon Gosselin, in time. The other kids might also want to see him as they grow older as well. As one fan said, “All the kids will eventually to some degree…[come around].”

What do you think about Jon Gosselin only being able to share a photo of one daughter for the Koby Bryant #GirlDad tribute? Do you hope that one day the other kids reach out to their dad and start looking as happy as Hannah? Sound off your thoughts in the comments below.

Remember to check back with TV Shows Ace often for more news about Jon and Kate Plus 8 alum, Jon Gosselin.