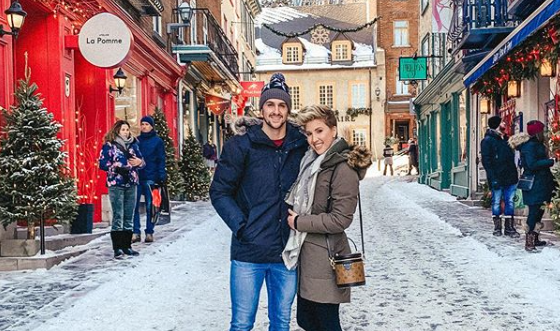 Savannah Chrisley and Nic Kerdiles have been engaged over a year, but they are still deeply devoted to each other. Kerdiles had lots of praise on Instagram for his woman. He did say they’d faced some tribulations in their relationship over the time they’d been together.

He captioned a snap of his lady love that said, “this is something special. I am not sure how I got this lucky to have found my best friend so early in life.” The hockey player is obviously smitten with the reality star. Fans have been able to follow their relationship on the reality show Chrisley Knows Best. The patriarch of the family has been known to be over-involved in his kid’s life. Savannah has previously said he was going to help with planning the wedding. Her mother Julie Chrisley help Nic pick out the perfect ring for her daughter.

This one is something special… I am not sure how I got this lucky to have found my best friend so early in my life. While others may think different from what they see on Instagram, our relationship has had so many trials and tribulations… but what makes this so special, is that our love never waivers. @savannahchrisley, you may annoy the shit out of me sometimes, but you annoy the shit out of me, while loving me unconditionally 😄.. so thank you for that 😘! I am so proud of the woman you’ve become and work to continue being. I love you babe!

What Trials Has Nic Kerdiles Faced With Savannah Chrisley?

Nic Kerdiles had a very sweet message for Savannah Chrisley. He mentioned she annoyed him sometimes but loved him unconditionally. After they had been engaged for a little while, Chrisley had mentioned they were taking time to focus on thier relationship.

While Nick didn’t specify what types of trials they had, he said, “what makes it so special is their love never wavers. He said he is, “so proud of the woman she’s become and works to continue being.” Fans are happy to see there are trials in their seemingly perfect relationship. It makes the beloved couple even more real to them.

The Two Have A God Centered Relationship

The family from Chrisley Knows Best is open about their relationship with God. That’s why Savannah Chrisley said the two of them are not rushing to get married, they’re enjoying their, “god-centered,” relationship together. Savannah told People, “it’s an engagement for a reason. You can figure things out and work together, get to know each other better. So we’re taking our time.”

The two met in 2017 over Instagram. It’s fitting that he shows her how much he cares with the platform. The pair got engaged on Christmas Eve in 2018. On a recent trip to Canada, Nic once again posted his love for Chrisley on Instagram. He said, “you continue to make me smile and laugh like a teenage boy.. so thank you for that!” He shared a picture of them with Nanny Faye Chrisley, Savannah’s grandmother.