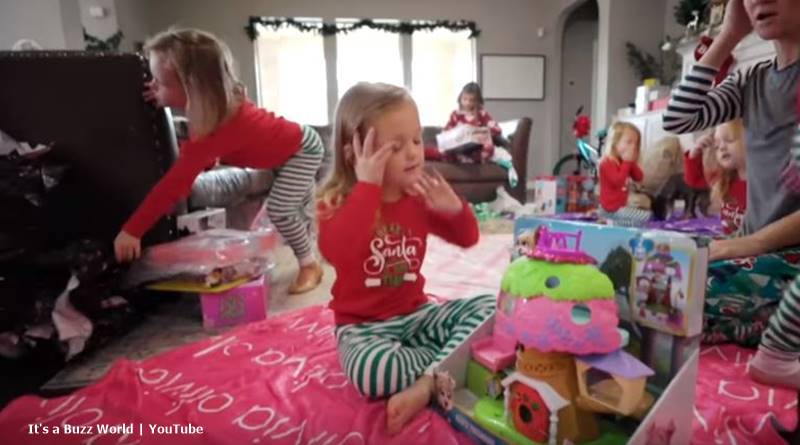 OutDaughtered dad, Adam Busby luckily makes awesome videos of Blayke and the quints. Sharing these to YouTube, it fills the gap in-between seasons of the TLC show. Already, Christmas came and went, but now Adam gave their fans a bit of a vid fix by sharing about their Christmas traditions.

During the holiday season, Danielle and Adam Busby shared on their Instagram about the kids. They went along to the school play, did their shopping and took part in the Christmas Parade in League City. TV Shows Ace covered quite a lot of their activities, including their day after Christmas visit to the park. At the time, we noted its a very “Texan” sort of thing to do on that day. They made cookies with Danielle and enjoyed the mild weather there.

After a road trip, the family got back to Texas, but then everyone except Adam and Blayke went down with flu. InTouch Weekly noted that the OutDaughtered dad fielded some hate from followers about his stance on vaccinations. He looked tired as he was the caregiver. So, it’s no wonder we didn’t see any new stuff up on YouTube for a while. But, with the kids better now, he finished one up and shared it over the weekend.

The new video opens with Danielle carrying mugs of milk. They don’t usually get it, but the kids wanted it for the special occasion. Adam said that while the kids went to bed, he and Danielle sorted out some last-minute things, and “Santa Claus came.” The video showed that Santa “delivered a play gym” outside. Next, we saw Danielle with the quints as they all woke up and drank their milk. The girls hoped that little Beaux dog also got a Christmas present.

Danielle told the kids that she thought Santa came in the night, but she didn’t want to look. Adam told the OutDaughtered kids he thought Santa “left something outside.” Well, they had to go and wake Blayke first, so off they went to her bedroom. Blayke wanted to sleep in, but that’s a bit hard with five sisters telling you to get up, because “Santa left something outside.” Eventually, everyone got downstairs and opened their stockings by the fire.

The video then flashed back to the quints doing their Christmas shopping. Everyone enjoyed the gift-giving and it looked like great fun. The video’s embedded below for your enjoyment.

What did you think of the nice Christmas traditions that Adam Busby shared on YouTube? Sound of your thoughts in the comments below.

Remember to check back with TV Shows Ace often for more updates about the Busby family of TLC’s OutDaughtered.