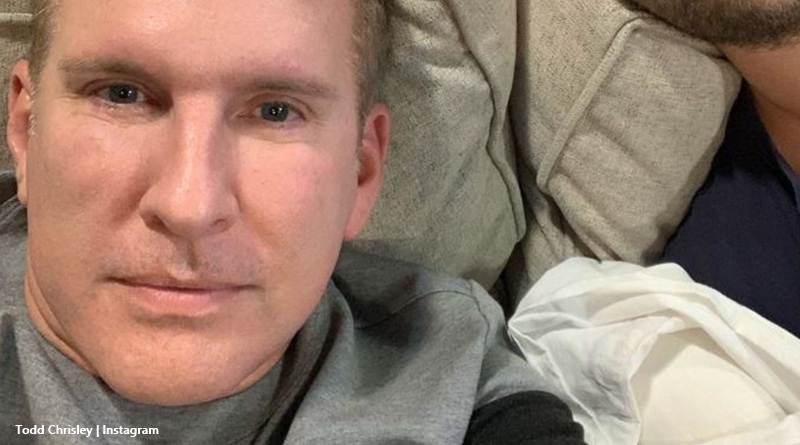 Todd Chrisley fans know that he and his son Kyle made up their differences, and get along just fine these days. But, a troll who obviously doesn’t follow them closely, made a snarky comment on a post about Chase. Todd slammed them, and then called out another troll on his post which was clearly a joke.

Todd Chrisley posts about Chase, troll tries to get clever with him about Kyle

Fans love the patriarch of Chrisley Knows Best for his fun and joking around. But trolls often see a different side to him. And, his fans tend to agree that Todd’s the king of comments when it comes to putting down the nasties. On Tuesday, Todd shared a post about Chase, which was clearly meant in a joking way. Trolls responded to that, but first, another one decided to throw in a comment about Kyle. Actually, TV Shows Ace reported ages back that Kyle and his dad settled their differences and now get along fine.

Todd Chrisley captioned his photo of him and Chase with, “If I didn’t love this kid @chasechrisley with all my heart, I would’ve flushed him years ago.” The troll wrote, “How’s Kyle? Still kicked to the curb?” Todd’s answer came fast. He wrote, “you just can’t fix stupid, and you are proof of that.” Fans loved his comeback. One fan told Todd, “you got that right. people say the stupidest things.” And, the troll disappeared back into their lair. But other trolls also had a go at Todd.

Other people decided that they would take exception to Todd referring to his son as a piece of “sh*t.” But other fans got annoyed as Todd obviously meant it jokingly. In fact, some of them also jokingly say things like “I brought you into the world, I can take you out of it.” One critic said to Todd, “Flushed him? Does anyone else not get it? Sick.!” Well, Todd didn’t let that go by either. He came back with, “why are you following me if what I post offends your ignorant judgmental *ss so much?”

Well, fans of Todd Chrisley also climbed in and told off the trolls who just seem either ignorant or lacking any sense of humor. One fan agreed, “I always told mine that if I didn’t love them I would have sold them to the circus. But flushed is good, too 😂.” Others recalled the time that Todd said on the show he should have “left him in a tissue.” It’s all in fun, but the trolls don’t seem to get it at all, fans think.

If I didn’t love this kid @chasechrisley with all my heart , I would’ve flushed him years ago ..

The comment about Kyle had some fans wondering if the troll lived under a rock. After all, it was widely reported that Kyle landed up in the hospital and his dad rushed to his side. Outlets like Tennessean, an offshoot of the USA Today Network reported on that in August last year.

What do you think about a troll, obviously out of date trying to get Todd Chrisley worked up? Do you agree that Todd puts down trolls like the king of comments? Sound off your thoughts in the comments below.