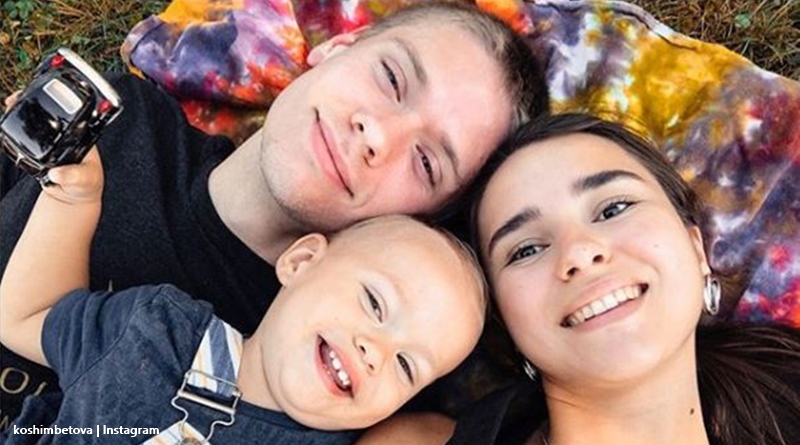 90 Day Fiance fans recall that Steven Frend and Olga featured on the TLC show in season 6. He came across as the villain of the season. But later she arrived from Russia with their son Richie Alex and we reported they got married in the USA. However, fans noticed Olga wasn’t wearing her wedding band in a recent photo. Concerned, they asked her questions, but she only gave a cryptic reply.

So far, there’s been no sign of conflict between the couple. But, someone – presumably Steven, took a photo of Olga that she shared on Tuesday. And, it’s clear that she’s not wearing a wedding ring. It shows her standing with her son in her arms. Olga captioned it with, “Give me five 👋🏻 How would you rate these photos from 1-10? Honestly, I think they became of my favorites.” The photo tagged them as being at the Wizard of Oz Playground near Mitchell, Washington.

One 90 Day Fiance fan asked why Olga wasn’t wearing her ring. In reply, she only said, “Too complicated.” Well, naturally that concerned fans as they think something might be wrong. But she never explained anything more about how or why it’s complicated. Notably, Reality Tv World pointed out that neither of them posted a photo of each other for a while now. Mind you, they do post plenty of photos of them alone with their son. But, it’s also not the first time Olga spoke about things being “complicated” with Steven.

Olga previously talked about things being ‘complicated’ between her and Steven

On November 12, in a post on Steven’s  Instagram, the 90 Day Fiance mom said that things were “complicated.” That came when a fan asked if they are are still together. Steven reacted by saying, “I just don’t know how to answer your?” The fan commented, “sorry! I’ll just take that you guys are still tg and mind my business. Take care!” Olga chipped in and said, “too complicated.”

So, when she says “too complicated,” maybe they just don’t want to engage in totally personal questioning. After all, there really was no indication anywhere that they might not be together.  Then again, she might not wear her wedding ring for a multitude of reasons. Maybe she put on some weight, or lost some weight, or is afraid of losing it. These days they spend a lot of time outdoors with their child. Maybe we can assume that she takes the photos of him and he of her.

What do you think about Olga’s cryptic reply about not wearing Steven’s wedding band? Do you think it’s her lack of English or just that they can’t be bothered dealing with such personal questions? Sound off your thoughts in the comments below.