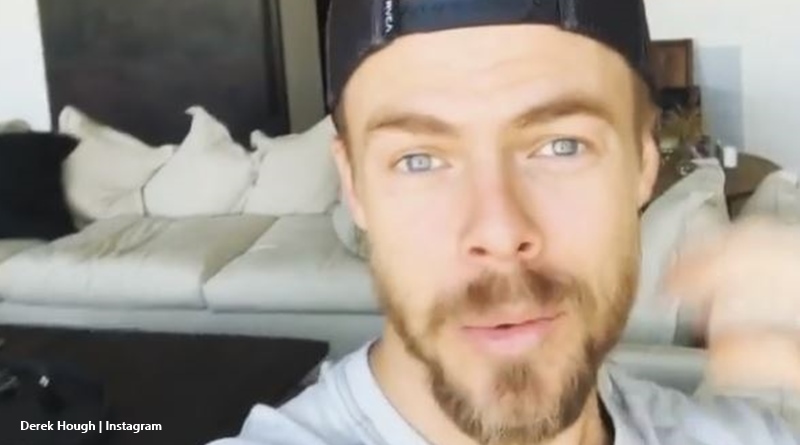 DWTS former pro dancer, Derek Hough ended up in the hospital for emergency surgery on the weekend. It turned out he had appendicitis, and a burst appendix can be a worrying condition. So, it’s good he realized he had a problem. The news came via his Instagram where he shared about it after the procedure.

DWTS – Derek Hough up on his feet soon after emergency surgery

Derek’s also a World of Dance judge, so his fitness levels are high. And, when it comes to surgery, fitness levels can help with a faster recovery. On his Instagram, he shared how he tried a little dance next to his hospital bed. In fact, his photo showed him looking a bit worse for wear but willing to give it a try. In his caption, he said that he woke up very early in the morning with “a severe and…sharp pain in my abdomen.” Realizing something needed attention, he got himself to the hospital. There, he underwent surgery to remove [his] appendix straight away.

But, full of good spirits, the DWTS alum noted he felt a bit “medicated” still, but did a little dance for his girlfriend Hayley Ebert. Laughing, he told her he did it for her. To which, she replied, “So hot.” Obviously, she was joking. But he thanked her for lying to him. So, it certainly looks like he’s on the mend and rather quickly. Naturally, other friends and celebs wished him well after the emergency surgery. Benjamin Burnley of the Breaking Benjamin rock band said, “Speedy recovery my buddy!! 🙌🙌.”

Woke up at 3am with a severe and a sharp pain in my abdomen. Knew something wasn’t right. Turned out it was appendicitis and had surgery to remove my appendix straight away. This is me immediately after, still a little(a lot) medicated, giving @hayley.erbert a (sexy) little dance. Me: Is this doing it for you babe? Hayley: So hot. Thank you for lying to me babe 😉

Loving support for Derek as he enters his recovery period

Popculture noted that another celeb, Amy Purdy of Dancing With The Stars also said, ‘Feel better soon!!!'” And, he should do. These days appendix procedures don’t mean a very long time in hospital. Usually, Healthline tells us, the removal becomes necessary if the appendix becomes swollen or infected. Interestingly, they also note that nobody’s totally certain what we need it for. However, everyone can live quite happily without one. After surgery, usually, patients take a few weeks to a month to fully recover.

Actually, appendicitis seems easily fixed with surgery. However, it’s lucky that the DWTS alum went along for treatment. If the appendix becomes very inflamed it might burst. That condition could become dangerous. Apparently, the signs of possible appendix problems include pain radiating across the lower right side of the tummy. Sometimes this comes with vomiting, nausea and perhaps a fever.

What do you think about Derek Hough realizing something felt very wrong? Do you agree it’s better to be safe than sorry and get this sort of thing checked out quickly? Sound off your thoughts in the comments below.

Remember to check back with TV Shows Ace often for more news about the cast of ABC’s DWTS.