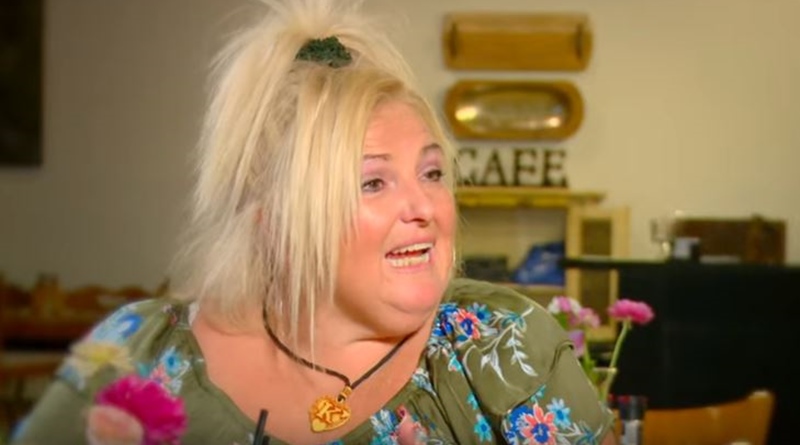 90 Day Fiance: Before the 90 Days fans saw a bit more about Angela Deem and her desire to have a baby. Having seen a fertility expert, Angela revealed the status of her eggs. Now, fans react with hilarious memes and call it her “dino-egg”. Oh, and in the latest episode, we saw her throwing her drink at Michael’s friends, but that’s so Angela and old abusive news that people prefer to diss her egg.

Before setting out to confront Michael’s friends who he invited for a drink, we saw Angela trying to get her daughter to donate an egg again. Already refused once, she refused again. Maybe she got in a bad mood because later that evening, she embarrassed Michael, threw a drink at his friends, and ranted about all and sundry. So, pretty much, we got served standard Angela fare on the TLC show.

But the hilarity comes from Angela and her egg. She told the camera and her daughter about the egg. She noted that she only has one and it “might be dead.” Actually, given the number of cigarettes and alcoholic drinks Angela consumes, some fans aren’t surprised that the egg’s possibly dead. In fact, it’s a miracle Angela still keeps going. Michael seems desperate to get to the USA, but he needs a baby. His mom said that’s the African way, so she should deliver or he’s gone. But, probably he won’t be gone – ever.

Twitter seems the place where fans of 90 Day Fiance come up with the most cutting memes. Instagram, on the other hand, tends to be a bit more given to writing their comments. Reacting to Angela’s egg problem, one fan said, “‘My egg might not be alive’ gee Angela, what gives you that idea?” That comment got attached to a meme of someone smoking the cigarette on a no-smoking sign. Another one commented, “Angela has one lil sad egg and it’s not even working.”

Meanwhile, most of the cast, including Angela got trashed by some followers. One person shared, “Darcey is a da*n train wreck. Benjamin is f*ckin weird. Angela and her rotten a*s egg… I can’t deal with these ppl I’m done with this show.” Another shared a similar sentiment – “Angela and her dino eggs and Darcy being drunk and crying EVERY episode…I can’t!” But, most fans just wanted to say their piece about that egg. One fan shared this meme:

Another funny meme got posted as “Angela’s last egg”:

While it may sound cruel to diss someone who badly wants a baby, those who don’t know the 90 Day Fiance cast member should note that Angela’s had children before. She’s also in her fifties and is twenty years older than Micheal, her lover. And, she is quite abusive towards him. So no, there’s not much sympathy for Angela at all. @90dayfiancecraycray on Instagram shared about the egg scenes. They noted, “Tonight on Before the 90 Days: Angela continues to miseducate a nation about ovaries and fertility.”

Tonight on Before the 90 Days: Angela continues to miseducate a nation about ovaries and fertility 🥚🍳 •••••• #90dayfiancé #90dayfiance #90dayfiancebeforethe90days #90dayfiancecraycraypodcast 😂😂😂

90 Day Fiance fans reacted, and here are some those comments:

What do you think about fans reacting with hilarious memes to Angela Deem’s “dino-egg”? Do you think they’re too nasty? Or, did she invite all the critics though bad behavior? Sound off your thoughts in the comments below.