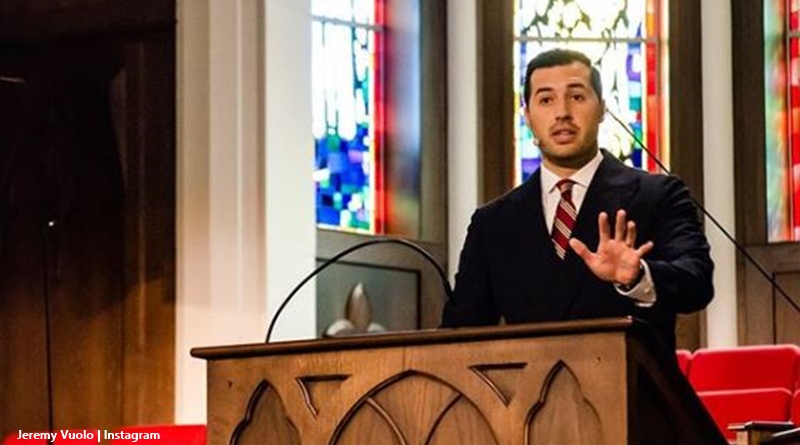 Counting On fans who think Jinger Duggar landed the perfect man in Jeremy Vuolo can relax. It turns out he’s not so perfect. Now, a new post he shared on Instagram reveals he’s a chronic nail-biter. So, what could be wrong in his perfect life? Is it possible to stop the unsightly habit? Is it bad for him?

Millions of people bite their nails, so it’s pretty much an accepted thing, especially with kids. But, with Mr. Perfectly Groomed Vuolo, it’s a bit of an eyesore. Those people who do bite their nails often become self conscious about. And, it becomes a habit that most struggle to break. The photo that revealed his nails came on a post he shared after officiating at a wedding.

Jinger shared about the wedding first. On her Instagram, she shared a photo of the three of them in Nacogdoches, Texas. She said how much she “loves autumn weddings.” It turns out that Jeremy was the main officiate. And, on his post, some fans congratulated him on that. They were at the wedding of friends Cade and Gabby.

Jeremy shared a photo of him holding a drink afterward, and his bitten nails were very obvious. The Counting On star even noted in the caption, “This is the day the Lord has made; let us rejoice and be glad in it…and stop biting our nails.”

Few people troll on Jinger or Jeremy’s Instagrams, but some Counting On fans told him to do something about it. Here’s what a few of them noted:

Some people think that biting nails is a sign of nervous tension or stress. Is that true? Could Jeremy be struggling with some issues we don’t know about? What could possibly be wrong?

This is the day the Lord has made; let us rejoice and be glad in it…and stop biting our nails. . . . Oh, and if you ever find yourself in Nacogdoches, Texas, @thumpersnac is the place to get caffeine ☕️

What could be wrong with the Counting On star? Does he bite his nails chronically?

Well, biting nails can be a sign of stress and anxiety. But, it turns out other factors can be considered. Plus, our Counting On Mr. Handsome can take some steps to stop the habit. Over on WebMD, experts explain some interesting facts about nail-biting. For one thing, did you know it can be hereditary? They noted, “Scientists aren’t sure if nail biting is genetic, but kids whose parents bite their nails are more likely to bite their nails, too. Studies show this happens even if the parents stop doing it before their child is born.”

Half of kids and teens in the world bite their nails, but most of them stop when they reach adulthood. But, yes, those who think Jeremy’s stressed could be right. Stress and anxiety can be big factors as can “boredom, hunger,” and “insecurity.” Even “feeling down” sometimes triggers it. Most people, the site notes, do it without even thinking. And, it can sometimes be detrimental.

Biting nails can actually be unhealthy. The Counting On dad could get sick, or spread germs around with his bitten nails. WebMD notes, “It can make you sick.” The website explains that “Hands are a hotbed for germs, and nails are their perfect hideout.” So, when you put your nails in your mouth multiple times a day, it increases your chances of getting sick.” Actually, the skin and cuticles can get damaged.  And the damage you can cause when you bite your nails creates an easy way for germs to get in.

Familydoctor.org explains that infection can get into your nails and the surrounds. Paronychia happens when “the skin around the nail gets irritated or injured.” The germs cause little pockets of pus, which is pretty gross, and often arise from “biting, chewing, or picking at the nails.” So, bitten nails are not only unsightly, but they also bring a health risk. In extreme cases, the nail may part from the finger completely. So, what can Jeremy Vuolo and others do about it?

How to stop biting your nails

If a strong personality like Jeremy of Counting On struggles with controlling nail-biting, how can you possibly overcome the habit? Well, there are some suggestions on Web MD, but it takes time and patience. They suggest wearing gloves whenever you can. Then they recommend some “bitter-tasting clear nail polish.” Other ideas include cutting the “nails short.” This makes them hard to grip with your teeth. And, those people who suggested “a manicure” were spot on as well. That’s a good way to look good, and nobody wants to ruin something that looks nice. You can also try playing with a “worry stone or a stress ball.” Chewing gum’s also a good idea.

What do you think about Jeremy Vuolo being a chronic nail-biter? Are you a nail-biter, or did you conquer the habit? Share your thoughts in the comments below.

Remember to check back with Tv Shows Ace often for more news about the cast of Counting On.