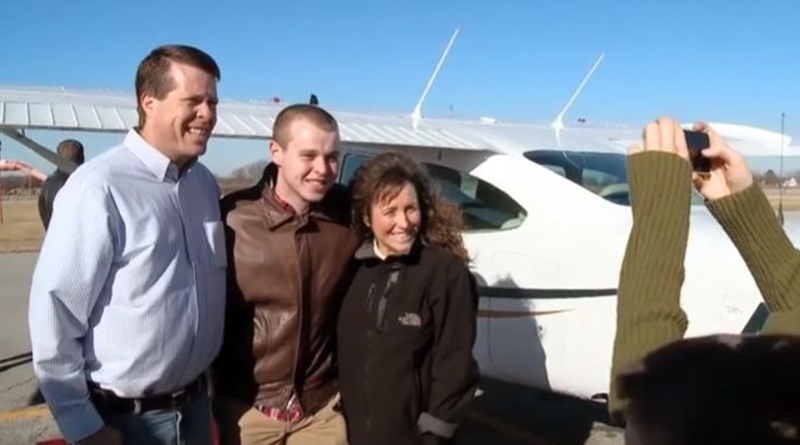 Counting On fans know the Duggar family owns several aircraft. Plus, some of their sons fly them. John David Duggar got his pilot’s license and then others followed him. Some fans wonder if they plan an aviation business. Now, a report from Arkansas revealed a helicopter landed at a home in Lowell, Arkansas, and it might belong to the Duggars. Of course, neighbors reacted with shock, as that’s a very unusual occurrence.

The initial report about a helicopter landing in someone’s yard came from 4029 TV.  They reported that Lt. Paul Pillaro, a public information officer confirmed a man landed the craft in their own yard. The incident went down on Friday, September 6. Some neighbors and police gathered to watch it. Some people took video shots of the unusual landing.

The outlet noted, “The home is in a residential neighborhood on E. Monroe Ave., just west of Ward Nail Park.” But they also noted that it’s “not illegal” to land in the neighborhood.

Of course, tabloids are aware of the Duggar family and where they live. They also know about the Counting On patriarch’s acquisition of aircraft. Showbiz Cheatsheet looked into the incident. In their report, they speculated about the helicopter belonging to the Duggars. Additionally, they noted that “the helicopter seemingly landed in the yard of Josiah Duggar.” Josiah holds a pilot’s license, so that’s a reasonable assumption.

According to the news outlet, the speculated young Duggar remained at home for about “an hour” before he hopped back on the chopper and flew away. Cheatsheet tracked down the chopper’s registration, and it is licensed to a resident of Springdale, Arkansas. Many of the Counting On family live in the Springdale area. And, fans pointed out the yard where it landed looks remarkably like Josiah and Lauren’s home.

The Duggar family and police never revealed who owned it. However, fans speculate about the potential of an aviation business. After all, how many planes and aircraft do the Duggar family need for their personal use? There’s even speculation that John-David’s wife, who’s a nurse might join them in some kind of medical air service. It makes sense for the Counting On family to expand their businesses as the ever-growing family expands. Plus, there’s no guarantee TLC will keep on renewing the show indefinitely.

What do you think about this helicopter that landed in a yard in Lowell, Arkansas? Do you agree it could belong to the Duggar family?

We have to wonder why the necessity to land at home when no apparent emergency went down. Surely they own cars? While no laws got broken, it certainly alarmed neighbors. And, it somehow comes across as a bit kitschy. Sound off your thoughts in the comments below.