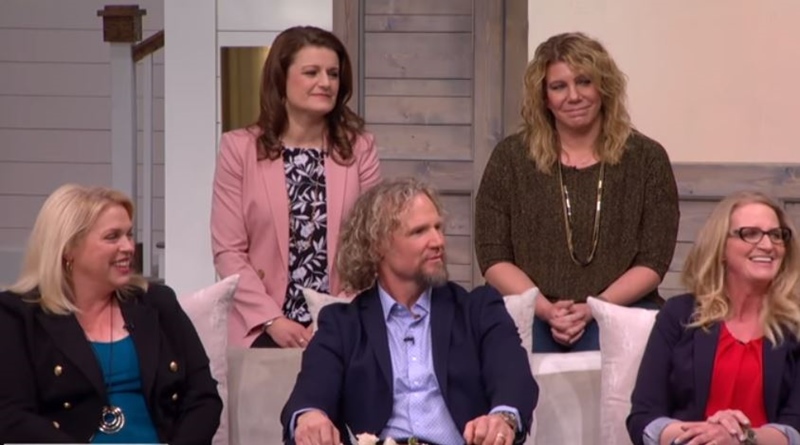 Sister Wives was recently featured on a Pickler & Ben interview and they dished on their intimate schedules. Actually, Kody Brown and the wives talked openly about many other aspects of their plural family life. Asked about the top three questions people ask them, their schedule rated at number one. Other questions they often hear are whether they want a fifth wife and whether they “get jealous.” The video’s at the bottom half of this article.

Contrary to what people suspect, Kody didn’t dominate the conversation. In fact, everyone got a chance to speak up. Meri looked relaxed and happily joined in, as did Robyn, Christine, and Janelle. Actually, lots of fun and laughter became evident in their rather dynamic, if complex relationship. Questions in the two-part interview ranged from how they shield the kids from trolls to the common problem of kids being told to “ask your mom.”

However, of the three top questions often discussed on social media, only the main one got an in-depth answer from the Sister Wives. Actually, they have no fixed schedule. “What’s the schedule?” was raised by Robyn first. In fact, the family spends so much time together they almost act like twins, where one person picks up the other’s sentences. All five of them almost simultaneously mentioned the schedule.

Turns out, there’s really no fixed calendar. Often on social media, the question gets raised and people wonder if each woman has a week at a time. How does Kody juggle it all? To be honest, they even ask if the intimate act exhausts him. However, like most families, things happen in the bedroom much as it would anywhere else. For example, a birthday dinner, or anniversary might lead from a special meal to intimate moments. As Meri pointed out, Kody’s “not obsessed with the schedule, so why is everybody else?”

Kody joked back that some of them obsess “with the schedule.” Groans and laughter indicate it’s an old joke in the Sister Wives family. Seriously though, Kody said he thinks the question gets asked because people want to “know that each wife’s included,” and “is part of the family.” Robyn interjected, adding that people want to know “that their needs are met.”  Janelle mentioned they “don’t really think of it as a schedule,” adding that “it’s just the way the family flows.” Kody picked up on that and mentioned things like evenings out at “band concerts.”

A fun rapid-fire Q&A session followed. Actually, it’s interesting to note how often all five of them agreed with the answers. However, the first one saw the wives shrieking as they asked about the best cook. Kody said he’s the best. However, he just joked, saying everyone says “Christine.” Everyone agreed that Christine’s the funniest of the five. On the favorite memory, Christine said “Christmas Day,” but Kody disagreed saying, “a wedding.” However, he quickly amended that to “each wedding.”

Overall, the interview came across as fun, friendly, and educational. Did you enjoy it? Are you surprised that there really is no set schedule for Kody Brown and each wife? Shout out in the comments below.

‘The View’ What Does Ana Navarro’s New ‘Title’ Mean?
Britney Spears Claps Back After Kevin Federline’s Comments About Their Kids
‘DWTS’: Lindsay Arnold’s Family Just Got A Little Bit Bigger
‘The View’ Is Joy Behar and Whoopi Goldberg On Way Out?
Abigail Heringer Reveals When She Knew She Loved Noah Erb